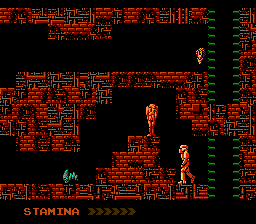 After a relative success of Relics in 1986 for a number of home computers, Bothtec, the team behind this game, started work on the game’s continuation for a new platform, Relics: Ankoku Yousai (“Relics: Dark Fortress”), this time Famicom Disk System. This was pretty much developer’s first experience with that system, yet the game was as ambitious as its predecessor.

The plot of the game, as explained in the game’s manual, is quite simplistic. Just like in the prequel game for PC-98, the player takes role of a spirit that has to take over enemies’ bodies to survive. They have agreed to help one of the sides of the ancient conflict revealed in Relics’ true ending, Heaven, in its fight against the forces of Hell, which have now invaded the Earth and taken the princess of Heaven hostage. The player’s goal is to explore the Dark Fortress the game is named after, find five idols hidden across it to stop the invaders and rescue the princess. 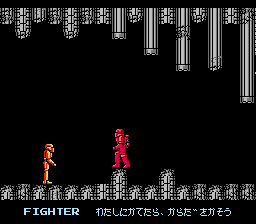 After starting the game, the player meets the first major design flaw of the game: the game tells them to switch the sides of their floppy a couple of times so that the game can load its assets. Finally, when the loading message on the black screen is replaced with a surprisingly detailed view of the fortress’s interior and the player character’s first body, the game stops for about five to six seconds a few more times, first to process the level data and then load the graphics of the first enemy the player encounters, with a message in the bottom saying that the game is loading. Sadly, this will happen a lot during the playthrough – encountering new enemies or getting up or down the ladders will cause the game to halt in order for it to load the very inconveniently utilized data, and the fact that it’s quite easy to accidentally fall down the holes doesn’t make it easier. It only gets worse further in the game: in levels where the idols are hidden you will have to switch sides of the diskette multiple times in a row just so the level boss can appear.

Once the player decides to retaliate against the first adversary, they will find movement even clunkier and collision even buggier than in original Relics, already notable for its somewhat complicated movement controls and occasional oddities in interactions with the game world: to turn around the player has to first press up, and then left or right, depending on where they want their character to go, otherwise they will walk backwards – a system designed just for the game’s combat; the player will probably miss a lot of their attacks, no matter how close they are to the enemy, and even those hitting it will probably be blocked. Although the enemies are susceptible to collision problems too, they will probably leave the player character significantly weakened, with little to no health, if not outright kill them, forcing the player to restart the game with all their items lost, but with the same body as before the defeat. Even climbing the ladders behind the first enemy is a little difficult: first the player must face the background, and then jump. Thankfully, there are a lot of stashes across the whole fortress having all sorts of helpful items, from medicine vials to powerups, either in obvious statues or hidden in the breakable walls. 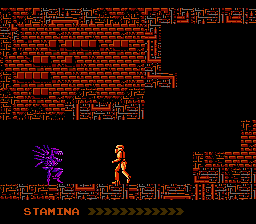 From the graphic design standpoint, the game is outstanding. The game retains the Giger-esque visual style of Relics, with all its machinery and biological monstrosities showing once in a while, although more fantasy-themed enemies appear quite often, such as an occasional mudman or mummy. The attention is detail is, just like in the previous game, thorough. However, Ankoku Yousai‘s visuals are essentially what ensured its near unplayable state: the sprites Famicom would need for such level of detail take a lot of disk space and console’s memory, and loading data from the floppy means that it will be read in its entirety, which would usually take a few seconds. The fact that the game has a plethora of different enemies being practically next to each other only makes this more difficult.

Relics: Ankoku Yousai still has the body possession mechanic of its predecessor, although significantly downgraded. While in Relics the player could take over almost any NPC’s body they could take on, offering the player continuous progression of strength or giving them new ways to avoid unnecessary fights, in this game they can snatch the bodies of a few bosses, namely the lost warriors of Heaven who have gone rogue while they were imprisoned in the fortress. The player possesses these warriors only after defeating them in combat, which, given the game’s controls and buggy collision, is a very non-trivial task. All of these bodies have their own strengths and weaknesses and are more or less suited for beating specific levels. For example, the yellow Fighter that fights with his fists is quite sturdy and hits very hard, but has a very short attack range, making fights even more difficult to come out from unharmed; or the Sorcerer: he has the most powerful long range attack, but he starts out with ridiculously low health and has to recharge his powers using hidden books, yet he is the most suitable for clearing rooms of small enemies hidden behind walls.

All in all, Relics: Ankoku Yousai, while incredibly ambitious, is a great example of what happens if an inexperienced team tries to bite more than they can chew. Bothtec definitely needed more experience with the platform before it could take on such a big project, especially given it was released about a year after their first significant game, Relics. While the game looks pretty, it is very buggy and poorly optimized, rendering the game very difficult not just to play, but to enjoy as well, with all its constant loading and floppy flipping. In fact, the team has realized that the game’s quality only leaves much to be desired and was so discouraged, they outright abandoned most of their development for Famicom, settling for home computer games instead, and leaving no credits in the end product.