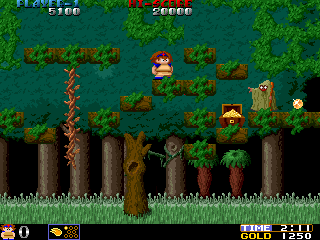 Toaplan is mostly known for their shoot-em-up output, but they had plenty of games in other genres, even if they weren’t quite as prolific. One of these was 1987’s Wardner (known as Wardner no Mori (“The Forest of Wardner”) in Japan, and Pyros in North American arcades. It’s a side-scrolling dark fantasy action title, similar to Capcom’s Ghosts n’ Goblins (which preceded it by two years) and Irem’s Legend of Hero Tonma (which came two years later). The premise is that a young boy and his ladyfriend have found themselves in the dangerous forest of the fearsome warlock Wardner; the girl gets kidnapped and it’s up to the guy to save her. It’s likely that the name “Wardner” came from “Werdna”, the antagonist of the first Wizardry, as they’re spelled the same in Japanese.

Luckily, the hero has some simple magical powers in the form of a fireball, which flies a brief range before floating towards the ground. Spread throughout the stages are glowing orbs, which can be used to power-up your magic, so you can toss more than one fireball at a time. The stages are also littered with moneybags, with shops between levels where various goods can be purchased. These include three types of swords – Star, Moon, and Sun – which grant different types of firepower. The Sun sword fires out a laser, and it’s basically a requirement in order to beat the final stage. Also found are fairies, which will surround your character and absorb any hits. They’re extremely powerful if used correctly since they can also inflict damage on tough enemies, but they disappear when you die, so you need to be very, very careful. 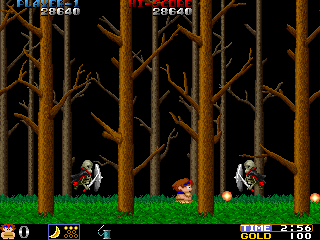 Alas, you can only take a single blow before dying, sending you back to an earlier checkpoint. You can find a cape that will absorb one hit – it will actually appear in your character, which is a nice touch – and extra threads can be purchased so you can take a little more damage. It’s a tough game, particularly due to a number of instakill traps, so careful play and memorization is a requirement, but it’s actually a little more lenient than others of its type. You keep your firepower and weapon upon death, and even after continuing. The respawning is also a little glitchy, sometimes working in your favor you put you a little past the obstacle that killed you, or ridding the screen of enemies to make your new life a little easier. It’s not until the end of the game, which is just a gauntlet of tough enemy encounters, that the difficulty steps into the unreasonable, but that’s expected for an arcade game

The game has an unusual art style, with most of Wardner’s forests being filled with all manners of horrific monsters, but both the hero and the heroine are cute, squat little humans that look like they wandered out from a completely different game. Among the five stages, the exterior levels in the forest are fairly straightforward, while the interior castle levels are a little more open-ended, with more little areas to explore. 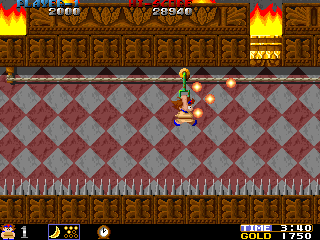 While the levels have the usual challenges like floating fire platforms and precarious vines, there are plenty of unique gimmicks. An early section in the first level has you avoid lightning clouds from a storm, while the second level is filled with conveyor belts where you need to dodge under swirling blades. The third stage has a unique ocarina item, that can be used to call a phoenix to fly over some dangerous lava, and there are a few sections where you ride ziplines over spikes, requiring that you let go at the right moment, lest you get skewered. Moments like these help make Wardner stand out, making the experience worthwhile for fans of challenging, dark fantasy arcade games.

Wardner received two home console conversions. The Famicom Disk System version is a visual downgrade, still keeping the basic style. The difficulty balance has changed, because while you now have a life meter, you only have a single life, and dying means restarting the stage. Health isn’t replenished between stages either, so you need to spend money at the shop to buy healing potions. You can save and continue your game, at least. 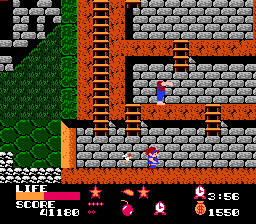 A Genesis port, called Wardner no Mori Special in Japan, is visually much closer to the arcade version, though the color palette is brighter and some details are missing. A new intro is added with close-ups of the characters, as well as a slightly different ending. The key addition to this version are boss battles – the arcade game had a few, but they were mostly just fights against the same dragon enemy over and over, which was hardly exciting. This version adds plenty of extra ones, including one particularly clever one. In the second stage, you can see your girlfriend trapped in a prison, and must find a key to free her. It’s pretty obviously a trap – you’ve basically just started the game after all – and in the arcade version, she just turns into a standard monster. However, in the Genesis version, she grows extra legs out of her back and turns into a monstrous spider demon, a transformation that’s quite terrifying. In addition to some other boss battles added throughout, the upper castle stage, originally the fourth level in the arcade game, has been broken into two separate levels and expanded, so there are technically six levels now. The final stage is also longer, since it adds in all of the bosses created for this version.

However, the folks beyond the Genesis port made one key oversight – each level has a short time limit, usually a few minutes long, and they didn’t bother to extend the timer to take into account the extra bosses. As a result, you either really need to hustle through the stages, waste some money to purchase some time extensions at the shop, or just deal with the fact that you’re going to die due to time running out a few times.

The main characters all have different names depending on the version. In the Japanese arcade game, the hero is unnamed (since you can input your initials) and the girlfriend is as well. Other names for the hero and heroine, respectively, are Pyros and Erika (Pyros arcade), Prince Alamode and Princess Pudding (Famicom Disk System), Raitos and Pitty (Mega Drive), and Dover and Mia (Genesis).

A few other ports were in development but unreleased. An NES version named Pyross, separate from the Famicom Disk System, was advertised by American Sammy, but little else is known about it outside of a flyer that shows some screenshots. A PC Engine port was planned from NEC Avenue, but was long delayed, and eventually canceled due to quality reasons. An arcade perfect port, along with the FDS version, is included in the Toaplan Arcade Garage project, included in the Hishou Same! Same! Same! package, released in 2022 for the PlayStation 4 and Switch. This version also features new artwork by fantasy artist Jun Suemi.