One of Konami’s lesser-known Famicom gems, Bio Miracle Bokutte Upa stars the eponymous Upa, an energetic baby who is apparently really intelligent and the prince of a magical kingdom. Perhaps Upa’s uncanny ability to rule a kingdom accounts for the bizarre moniker of “Bio Miracle” (Bokutte is a first-person indicator roughly meaning “I am”). One day, Upa receives a magical rattle bestowed upon him by a fairy he let loose when he broke an urn. Unfortunately, this urn also contained the goat demon Zai, who absorbs the souls of all adults in the land and kidnaps many other babies. The adorable infant must free the babies and clobber Zai, and the only way he can do this is to bonk enemies with the magic rattle, causing them to inflate and float diagonally upward where they can be used as platforms before exploding. Upa can also jump into them to bounce them around and use them as weapons to smack into other enemies. Depending on how Upa jumps into the enemies from below, they can bounce vertically, horizontally, or diagonally, but they can rebound and hit Upa if misused. Using enemies to your advantage is the main source of innovation, as you need to make platforms out of them to reach higher elevations. If you let these enemies go for a few seconds, they burst and become useless to you, so standing on them for too long is ill-advised, particularly when hanging over a bottomless pit. 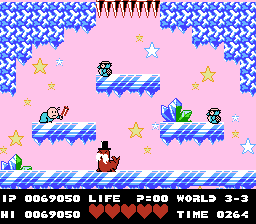 Upa travels through seven worlds, each with three levels: A sugary candy land (the second level involves Upa digging through giant cakes), a healthy vegetable world, the requisite ice stage, a crazy technological setting made of computer chips and motherboards, a school world make of pencils and rulers, a gauntlet of cheese and dairy products, and an imposing Lego fortress where Zai awaits. It is somewhat lengthy at twenty-one overall levels, but most of them are fairly short, though some of them can be challenging. Bio Miracle Bokutte Upa is not Konami’s toughest ever game, but it gets pretty rough despite the adorable setting; a noticeable difficulty spike occurs in world four, the aforementioned computer stage in which your gravity is involuntarily reversed. The final world is especially punishing, starting with a massive freefall full of spikes that require a bit of trial and error and ending with several segments that demand mastery of transforming enemies into platforms. Enemies themselves get trickier in later levels, as while you mostly start with slow moving pigs and bean-shaped red guys, you will eventually meet winged pencil bombers, birds which fly in warp-speed arcs, walking spiked bombs which are invincible until they explode, and unquestionably the weirdest of them all, tiny flying elephants that pelt you with rice balls.

Some bosses can be tricky to deal with, as they can only be damaged with inflated minions and often require diagonal bank shots to hit. You mostly fight large pigs at the end of stages that spit smaller pigs at you, but they become increasingly difficult due to their placement in the boss room, often requiring some skillful bank shots to hit them. A few different bosses pop up every now and again, such as a large snake that spits fire as smaller snakes rush you, and a red top-hat clad walrus that keeps sliding across the screen. Other stages end with no bosses, which is slightly less common than facing a pig boss at the end. It can be tough to survive with Upa’s short attack range considering that he only takes two hearts worth of damage, but there are some power-ups to curb the difficulty. Upa’s main source of health recovery is milk in either slim bottles which restore one heart or big bottle which restores it all. He can also extend his lifebar by grabbing a heart which also restores all health; he can amass five life hearts in total, though he goes back to two if he loses all lives and continues (in addition to having to start at the first level of each world). However, he goes back to two hearts after he clears a world, so you have to re-earn your life bar even if you do well.

There are also hourglasses which freeze time, blocks which destroy all enemies when dropped to the ground, and flashing bells which make Upa into an invincible super baby who actually runs while standing upright. There are also apples which do nothing but boost your score, although you do gain a bonus life for every 50,000 points earned, in addition to a few rare containers giving you bonus lives outright. The final stage of each world gives you two chests, and if you are lucky, you will first open the chest that has an extra life in it before hitting the chest that transports you to the next stage. These items can help considering that Upa’s rattle attack has a fairly short range and cannot be upgraded, but most enemies are relatively slow. The true challenge comes with the platforming and figuring out how to make the best use of opponents as stepping stones. Upa himself is a bit slow (he crawls, after all) and cannot just blaze through each stage like Mario might be able to do in the original Super Mario Bros. While nothing too complex to figure out, the extra factor of making the best out of your converted antagonists causes you to think about your next move. This unique transformation mechanic is what makes the game stand out among decidedly more generic platformers, and when combined with colorful graphics, an upbeat soundtrack, and a cute premise draped over a fair degree of difficulty, Bio Miracle Bokutte Upa is one of Konami’s unsung gems well worth playing. 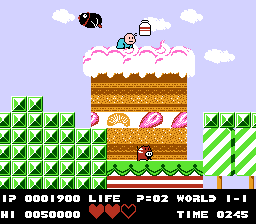 Bio Miracle Bokutte Upa was first released on the Famicom Disk System in 1988 and was somehow re-released for the Famicom as a cartridge in 1993. Why Konami wanted to remake one of their more obscure properties five years after its release is anyone’s guess, but it did bring about a few relatively superficial differences. The most obvious is the music, which had to be restructured to fit the cartridge format for sound output. As in the similar case of Castlevania 2, the music arguably sounds better in the Famicom version. Another change was the addition of an Easy mode in which Upa takes less damage and starts out with more lives. A really minor cosmetic change was made on the title screen where Upa does not drop down onto the logo for no apparent reason. The game was ported to Japanese mobile phones in 2006 and the Famicom Disk version made it to the Wii’s Virtual Console in 2008, where American gamers could finally play it without resorting to a PC emulator or some sort of method to play imports.

Upa may not have been Konami’s best remembered character, but he was still notable enough land a spot in Wai Wai World 2, Konami’s zany crossover crash featuring several stages and characters from other Konami games. The hero, Rick, can morph into three out of five characters determined at the beginning of the game; Upa is featured alongside Simon Belmont (Castlevania), Bill Rizer (Contra), Goemon (Ganbare Goemon), and Fūma (Getsu Fuuma Den). While having a short attack range, Upa can transform enemies into clouds with his rattle and jump on these clouds to stay safe from danger. Upa was also included in Konami’s delightfully crazy crossover shooting series, Parodius; he was not in the arcade version, but was added to the expanded Super Famicom port (which also appended Goemon and Kid Dracula to its roster).

He also made it into the cast of Jikkyo Oshaberi Parodius, and as everyone in this installment had a player two version with a different color and some differences in their weaponry, Upa gained a female counterpart clad in pink named Rupa. They both fire off rattles as their default shot and both can gain a Wide shot which causes them to fire tiny bell projectiles in a spread. Upa gets Homing missiles fashioned from milk bottles and a rapid Laser, which is really just several slim milk bottles stacked together. Rupa has a Multi Spread Gun missile which fires several large milk jugs in multiple directions and a Search Vulcan that fires out what appear to be oddly-colored donuts auto-aimed at opponents.