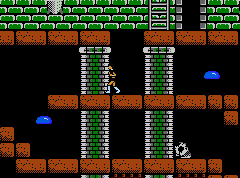 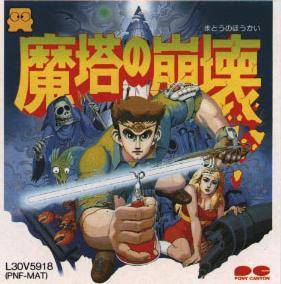 A number of games fashioned themselves after Konami’s Castlevania, but fewer mimicked its sequel. Matou no Houkai (“Collapse of the Demon Tower”): The Hero of Babel is one of the few games that very obviously patterns itself after Simon’s Quest, right down to the similar character sprites, though it’s still original enough to stand on its own. This was also the last game developed by Carry Lab, who had previously worked on Mystery Quest.

As an unnamed hero, you must climb the tower of Babel to fight the evil demon Asmodeus and reclaim the kidnapped princess. As such, the game sort of plays like Castlevania II if all of the wilderness traversing was hacked out and left with just the mansions. The tower is divided into distinct levels, though owing to its circular structure, the stages wrap around in both directions. The hero looks and moves like Simon Belmont, and once again, one of his prime weapons are vials of holy water. (The icon seems almost identical.) Items, including additional weapons and power-ups, are found within torches, but these can only be extinguished by holy water. All subweapons take up WP (Weapon Points), but these are regenerated pretty quickly though item pickups. Behind certain doors are cloaked figures who dole out clues on how to proceed to the next area. 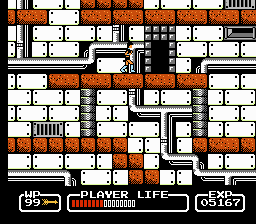 Right from the outset, there’s a very heavy emphasis on grinding. The experience meter is located in the lower right corner of the screen, and you need to gain 50 points before you can even obtain the first item to leave the beginning stage. Repeatedly killing foes would pretty much be necessary anyway, in order to expand your life meter. There is also a separate luck statistic, but it’s not entirely clear whether it’s all that important. Item drops are plentiful, but there aren’t nearly enough health restoratives.

The goal in each level is to hunt for a key and then open a door that will lead to a boss fight, and then the next floor.  Much of the game is spent looking for hidden elevators and platforms, which can lead to quite of a bit of trial and error, as with many others of this type of action adventure game. Once you’ve reached the last boss, you have a short amount of time to defeat him and escape before the tower collapses, though you can easily end up going the wrong way and run out of time.

The control takes some getting used to, as it’s easy to get caught in a flurry of enemy attacks, or the projectiles fired from various monsters.  Like Simon’s Quest, you can expect the levels to play tricks on you, with disappearing platforms to drop you down to lower levels. Enemies also have a nasty tendency to spawn right on top of you, landing cheap hits. 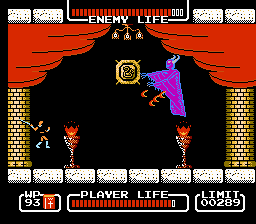 Just like with 8 Eyes, the biggest problem – beyond the necessary grinding and the aggravating platforming – is that the hero’s main weapon is too weak. It looks like a sword on the cover but it amounts to little more than a stick that’s slow, weak, and completely unwieldy. It’s tough enough trying to kill the mere bouncing slimes (another popular enemy cribbed from Simon’s Quest), but when you get to the first boss battle, against the Grim Reaper (there’s a trend developing here), your sword is just far too underpowered. Your hero, too, is much too slow and bulky. Many bosses have a tendency to float far out of reach, so you need to wait until they randomly spawn next to you to do any damage.

Though Simon’s Quest has a reputation for being obtuse, it’s a design masterwork compared to the terrible design and controls of Matou no Houkai.