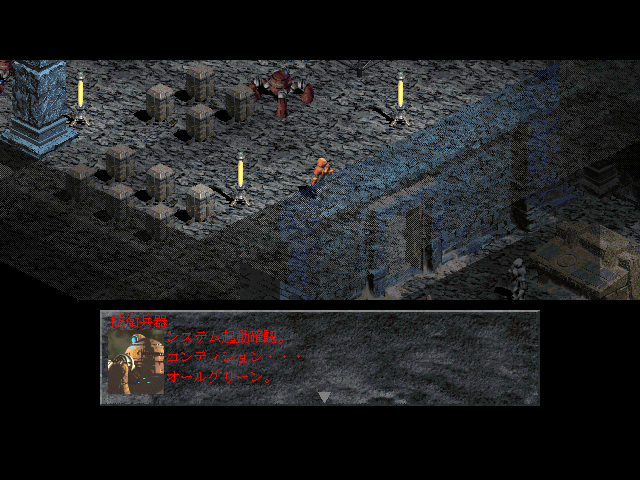 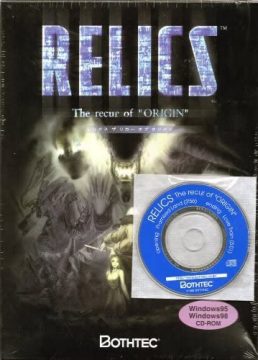 Since the release of 1986’s Relics and 1987’s infamous Relics: Ankoku Yousai, Bothtec, these two games’ developer, has been through quite a lot: it has been merged with Quest Corporation as its PC development team and then separated from it, after which it mostly published Korean RPGs in Japan and made some office software for accounting as well as a few Galactic Heroes games. Then, in 1999 a remake of Bothtec’s classic was made, dubbed Relics: the Recur of Origin.

While the main premise of Relics, possessing the defeated enemies’ bodies, is still present in this game, it plays like quite differently. Unlike its side-scrolling adventure predecessor for PC-98, The Recur of Origin is now an isometric action-RPG with significantly simplified controls – almost everything that the player can do could be done with nothing but the mouse, which is an improvement for the best; both mouse buttons are essentially multipurpose, with such functions such as movement, talking and fighting delegated on the left one, while using items in inventory and special attacks are done with the right mouse button. Every living creature in the game has usual stats for the genre, like hit points, special attack points, dodge rate and accuracy, resistances to the 4 elements present in the game and a special stat used by player only, called latency. 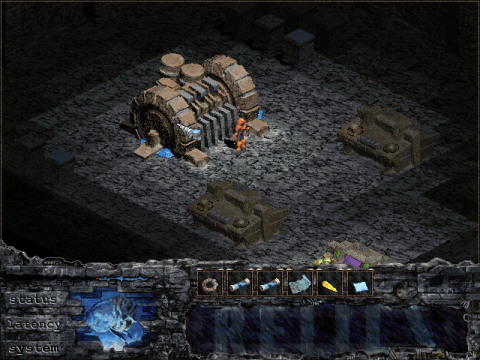 That is where the game’s possession mechanic plays out. The game still relies on the player’s ability to possess corpses, expecting the player to take over stronger and stronger bodies to advance the plot. Although the player can usually just take over a new type of body by killing it or, sometimes, just finding a dead one, and left clicking on it and then the brain button on the HUD, the player can upgrade their body’s latency as many as two times using. What this means is that the player can gain two upgrades to all abilities of a body type – physical strength and knowledge of its power represented through latency stat – new attacks and higher stats; sometimes leveling up leads to plot progression or access to a stronger body not controllable through normal means.

Raising this parameter can be done through both combat and collection of special usable items that are randomly placed in the breakable objects across the game world, though the latter is preferable as it is fast and doesn’t lock you out of possible events. Thankfully, should the player be in critical need of experience or rare items, they can usually delve into special dungeons where everything respawns. And although the game emphasizes combat much more than the original, needless killing is still being tracked.

The plot is left mostly unexplained at the beginning of the game, with the only things revealed about the player character being that they are a spirit that was separated from its body and can’t remember anything about itself or the world around it. This spirit was floating through space until it found a blue planet, which they decided to investigate. Upon closer look, they found an ancient fortress on a beach of some sea. Feeling that it’s losing its strength, the spirit decides to take over one of the creatures that were near. Then, the player is given control over the spirit and has to choose whom they will possess. 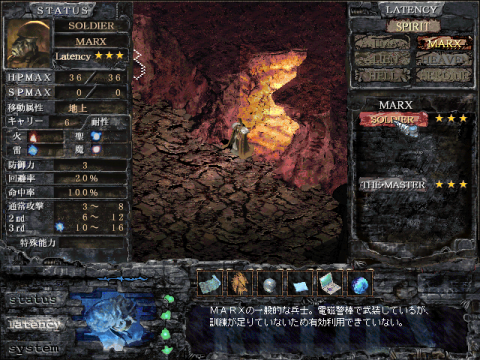 The rest of the story is up to you – the spirit can uncover its past or find a new purpose for its own existence. All of this depends on how willing the player is to explore the ruins and what of the game’s races the player possesses – and there is quite a lot to find out. The game is rich with events that comprise its non-linear plot and gives you a lot of freedom on what you will do, with a logical conclusion of as many as 25 endings, all depending on who you decide to side with and what you choose to do with the world.

The Recur of Origin isn’t without its weak points, however. The first one is visuals, which has changed a lot since 1986: almost nothing keeps that Giger-esque style of the original Relics. Instead, everything has a more simple, though not necessarily conventional, look. In addition, the game’s save system heavily limits the player’s exploration: the game offers only three save slots, one per each playthrough; you can save only to recover the game from a certain point once you leave the game or die, and the only ways to save have the player either stay at a checkpoint, which they have to go out of their way to find, or use a one-time item that lets you save anywhere. This means that, by a certain time, the player will have to commit to one route, almost with no ability to come back to before a critical decision was made except deleting the save. Also, The Recur of Origin can also be unnecessarily difficult or cryptic with certain routes, arguably even more than 1986’s original. 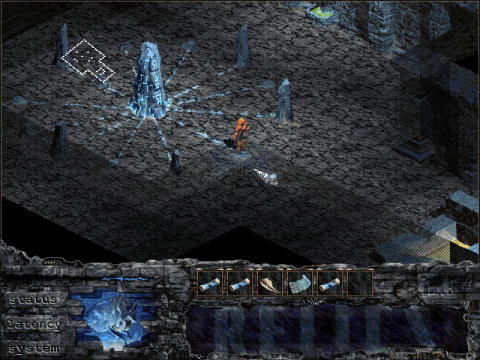 Overall, Relics: the Recur of Origin is a good game, and while it’s not as groundbreaking as its predecessor, it, just like with the original Relics, is a cult classic for a good reason – although more obscure than the 1986 game, it offers an experience that a lot might find interesting. The game was welcomed enough to earn two sequels, each an improvement to the mechanics and a new point of view on the story.