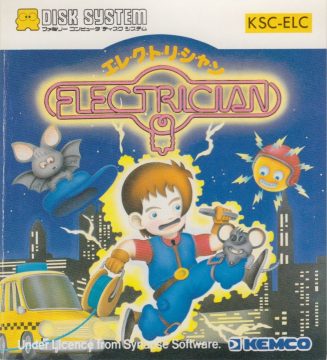 Even in the early 1980s, Mario was a big time video game star, and part of his appeal lied in his everyman, blue collar work ethic, putting him in roles of a carpenter (Donkey Kong), a plumber (Mario Bros.) and a construction worker (Wrecking Crew). One job he didn’t undertake was an electrician, and that role was fulfilled by Synapse’s obscure 1984 release, rather unimaginatively called Electrician.

The game is divided into two different types of levels. The first part is a vertical tower, separated into several floors. The goal here is to run wire from one end to the other, connecting it to the floor and ceilings when necessary, which will then provide power to the room. You’re pestered by various vermin along the way, which can disconnect the wires if you’re in the process of connecting them. In the early levels, nasties like caterpillars and rats are minor nuisances, but your opponents quickly become more deadly, like the bats, that will pick you up and drop you at some random spot (potentially tossing you off the building) or the spiders, who create invisible webs to get tangled in and can kill you contact. Some can be killed by stomping on them, some can be kicked, while others can only be destroyed if they come into contact with a live wire. Thankfully, compared to the protagonist from Spelunker, the hero of Electrician has quite a bit of fortitude, and can actually survive a fall of a story or two, though any more will kill him. If you light up a room with a television set, it will come to life, leap through the floor, and attempt to walk of the screen. If you manage to catch it, you’ll get an extra life. 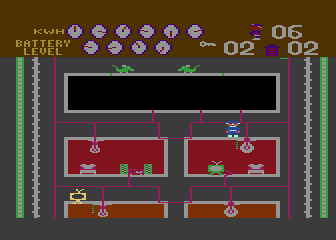 Once you’ve lit up the entire tower, you need to escape through the basement and into the sewers. These stages scroll from left to right and are divided into several tiers. The biggest threat here are the crocodiles, though they’re pretty easy to jump over, as long as you don’t touch their jaws. Rather unusually, the crocodiles will occasionally lay eggs – if you get close enough, there’s a random chance it’ll hatch with an extra life, or something that will kill you. Your way is lit by a headlight on your helmet, which will reveal walls once you get close enough. If you come across a dead end, the only recourse is to backtrack, take a ladder to another floor, and see if you can find your way forward. The walls in this section are actually randomized, so you can’t memorize the wall spots even if you wanted to. In a few cases, you may even need to climb to the bottom level of the sewers, which is flooded with water. You can jump on a raft that floats back and forth, though if you miss a jump onto another ladder, you may find yourself knocked into the water. When you first enter the sewer, you’re given a key with a number on it, which corresponds to the location of your next job. The first few stages are straightforward, but after the second stage, you’re given a key with the number “4” on it, which means you need to bypass building #3 and head onto the next one. This cycle continues until you reach the end of the game or run out of lives. However, the initial release of the game has a bug later in the game that causes it to become unbeatable, so you’ll need a patched version if you actually want to finish it.

Bizarrely, Electrician was one of a handful of American computer games that was licensed by Japanese publisher Kemco and ported to the Famicom System. This version makes a number of changes – Kemco’s game has larger, cartoonier graphics, and names the hero Richard Light. The manual details a story where an earthquake has knocked out the power of the entire United States, and it’s up to his genius electrician skills to save the day. His death animations, where he either shatters or melts, are rather amusing, if weirdly gory. Some of the enemies are changed, too, such as the alligators from the Atari version being replaced with turtles. Maybe they didn’t think Japanese gamers would get the joke about sewer gators? Or maybe they were making a more overt Mario Bros. reference? The walking televisions were also replaced with thieves, as perhaps they felt that was just a little too surreal.

The tower levels are mostly the same, though the jumping arc feels a little off. The sewer maze sections have been simplified so you don’t need to worry about keys or building numbers, you just venture through them to get to the next stage. There aren’t quite as many tiers to the sewers, plus you can actually walk on the surface, though in order to actually access a building, you need to approach from beneath it. The surface area also has different backgrounds of various places in the United States, including New York City, San Francisco, and Niagara Falls. Also new are assorted power-up items, that can light up the entire sewer maze, destroy sewer walls, or increase your jumping power. 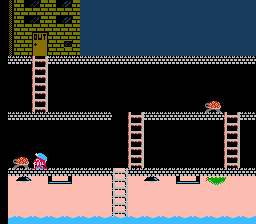 Presuming you hacked the Atari version, the ending in that release is just a screen with a simple congratulations. The FDS version has many loops and two endings, one of which involves Mr. Light kissing the Statue of Liberty. To take advantage of the disk media, you can actually enter your name and save your progress.

It really is exceedingly weird that this, of all Synapse games, was chosen to be ported to the Famicom Disk System. Synapse had a fairly decent number of interesting titles that have since become well regarded by fans, stuff like Shamus and Alley Cat, whereas Electrician was a minor title that didn’t even get its own retail release and was only shoveled out as a B-side for NYC: The Big Apple, another more well known title. It seems like it came out right as Synapse was merging into Broderbund – it does make mention of an unreleased game called Alice – and so perhaps that was the only way they could get the game out the door. 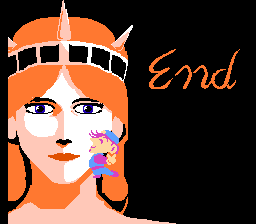 But also maybe they didn’t have much faith in it, because Electrician just isn’t all that compelling. It’s certainly original, but the first few stages are weirdly boring since enemies in the tower stages are more of a nuisance than an actual threat, and the sewer stages are more tedious than actually challenging. Even when the tougher enemies come up, there needed to be some kind of other gimmick to let you deal with them. It is pretty amusing to connect up a room and then watch the dimwitted foes electrocute themselves, but outside of kicking rats into the side wires, it’s not something the player actively does, just something they watch unfold. The result is an experience that never really comes together. 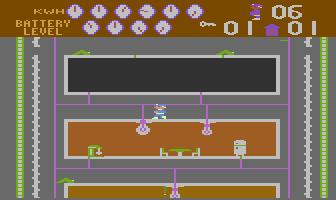 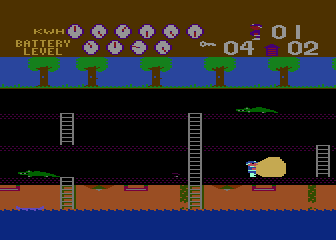 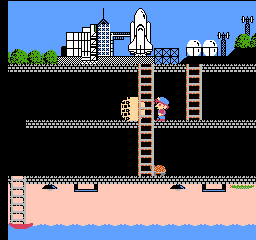