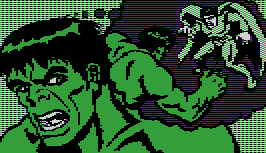 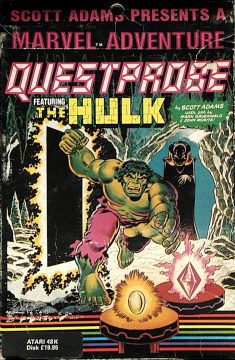 Adventure International was a developer from the late 1970s to mid-80s found by Scott Adams (no relation to the Dilbert creator) who specialized entirely in computer text adventures. Most of their titles sent the player on treasure hunts – scavenging through fantasy worlds, looting a carnival fun house, or looking for pirate booty. In 1984, they started the Questprobe series, each focused on heroes from the Marvel comic book universe. Each game had an accompanying comic book, which gave some context to the story, even though they could be quite divergent. Twelve games were planned, though only three made it to market before the developer went bankrupt and the rest of the line was canceled.

These certainly weren’t the first comic book video game tie-ins, as there had previously been assorted arcade and Atari 2600 games based on the likes of Spider-Man and Superman. However, these were action games, in comparison to the exploration and puzzle-solving required of text adventures. These text adventures were designed to take into account the superhero’s unique abilities, and helped set them apart from other games at the time. Additionally, the visuals on the earlier arcade games were kind of simple, while the adventure games featured static artwork for each location (on the more powerful computers, anyway), with artwork that decently replicated the look of authentic comic books. The low resolution pictures obviously look simple now, but for early 80s 8-bit computers, it carried a remarkable bit of authenticity. 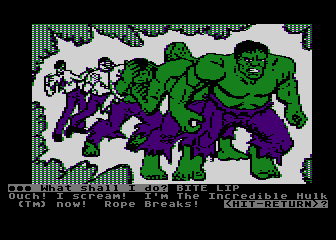 The first game in the Questprobe series stars the Incredible Hulk. Each of the stories are tied together by a being called the Chief Examiner, a sort of being being sent to Earth to study their superheroes. In this particular entry, the Hulk is sent into a computer simulation, and must escape. To do this, he must collect all of the hidden gems found in the game world, a way of shoehorning in the typical Adventure International treasure hunt into the structure. 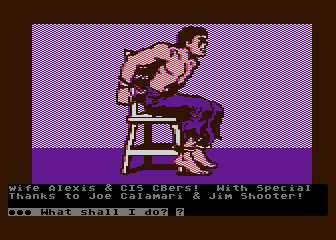 So everything begins with the Hulk in human Bruce Banner form tied to a chair. There are no clues on how to get out. There is an obvious solution, which is to turn into the Hulk and burst out of your bondage. Except, it’s not as simple as typing “turn into Hulk” or anything like that. Indeed, most players probably never got beyond this initial step, because the technique isn’t even something that’s featured in the comic. In order to Hulk out, you need to type “bite lip” or “bite tongue”, which will enrage Bruce enough to escape from his chair…but only temporarily.

It’s revealed that you’re in a dome of some kind, where gas has forced you back into Bruce Banner form. You can leave through a tunnel, but there’s a sign that warns you of “Hi Grav”. So, if you step outside while human, you’ll be crushed immediately. D’oh! But if you turn into the Hulk (at least you can bite your lip as often as you want), the gas will just come out and immediately turn you back. Except there’s a button by the tunnel, and if you hit it, it will toggle a “delay”. What is this delay, exactly? It’s super not clear, but functionally it keeps the gas from affecting you for a turn, long enough for you to turn into the Hulk, allowing you to survive the high gravity, and then exit safely. 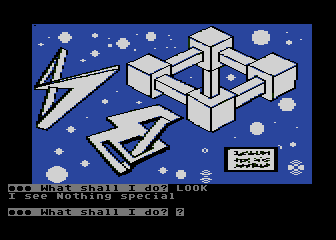 Once you’ve left, most of the game world consists of several other domes, plus an inexplicable “fuzzy” area, which is illustrated by various surreal Escher-like shapes. What is this area, exactly? It’s fuzzy, don’t worry about it. So you need to hunt for more gems, and a good number of them are found inside of the domes, underneath the domes (you can lift them from outside), or underground. On three separate occasions, you just need to dig a hole, and keep digging until you find a gem. Since it’s so dark, rather than just display a blank screen, there’s an image of the Hulk saying “HULK UNDERGROUND!” which is about as hilarious as it sounds. One of the areas is infested with ants. If you spend too long here, the ants will attack your eyes and kill you, the mighty Hulk. The solution to not being killed is to close your eyes. You can’t actually die though – well, you can, technically, but you’re just tossed into “limbo”, which has a set of stairs you can saunter down and re-enter the land of the living without any penalty. 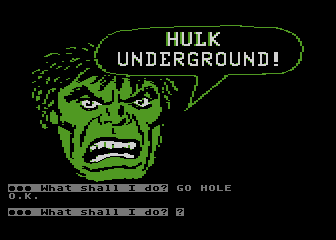 Somewhere in this area there’s also a cavern where Ultron has randomly captured Ant Man. You help him escape by leading this killer ants to him. This is probably the most interesting part of the game since it doesn’t just involve digging in the darkness for several turns. You do run into Doctor Strange at one point, who gives you the idea that you can “remember nightmare” to summon super, duper strength needed for one particular puzzle.

Once you’ve found all of the gems, the Chief Examiner congratulates you and gives you a secret password. This happens at the end of all of the Questprobe games, and these passwords were clearly meant to build up to something, but due to their cancellation, nothing was ever revealed. The three passwords that were used were all names of Scott Adams’ children. 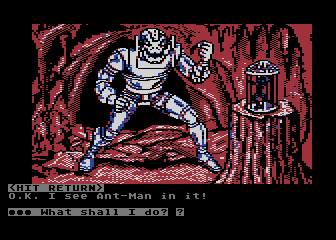 Anyway, this game is insane. It starts with one of those classically stereotypical adventure game scenarios where the solution kind of makes sense but would be impossible to figure out if you weren’t reading the designer’s mind. The rest of the game world is just bizarre and repetitive, but the surreal nature of…well, pretty much everything makes it worthy of some study. The visuals are pretty good for a 1984 adventure game – the Apple II and Atari 8-bit versions look the best, with the IBM PC version using the same visuals but stuck with 4 color CGA, while the Commodore 64 and ZX Spectrum versions use slightly simplified graphics that still look decent. The parser only accepts two word commands, and in the case where you might need to express something more complicated, it asks a follow-up question. It’s all so are extremely dated, even for the time, making it clumsy to navigate or do much of anything. 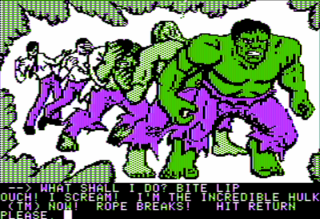 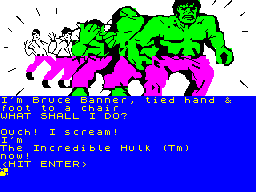