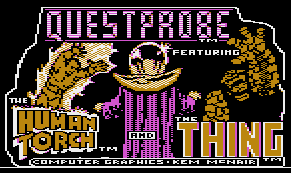 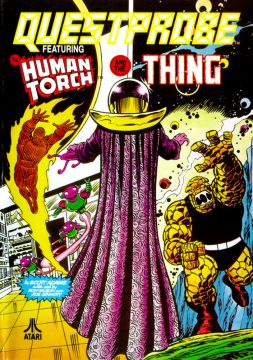 The third and final Questprobe text adventure features one-half of the Fantastic Four: Human Torch and Thing. The whole treasure hunt thing has been ditched, and instead, the ultimate goal is to find and rescue Alicia Masters from Doctor Doom’s castle.

Though the interface is more or less the same as the Spider-Man game, it’s actually quite a bit more complicated, because you can switch back and forth between the two heroes. Human Torch can fly and set things on fire, while Thing is very strong, and his powers get put to slightly better use here than they were in the Hulk game. Time also passes with every move, which is important to note with Human Torch, as he needs to rest every once in again so he doesn’t, uh, burn out. 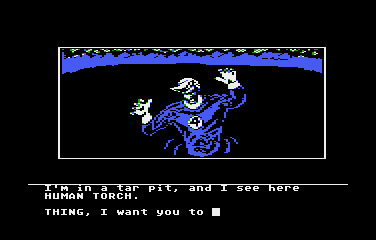 For as ambitious as this particular entry is…it makes many of the same basic mistakes as the others. Right at the beginning of the game, Thing is stuck in a tar pit, and Human Torch can’t do much to save him, at least not directly. Thing will also drown if you don’t do anything for a long enough time. The solution here is actually so simple that it’s kind of dumb – just make Thing hold his breathe until he’s sunk far enough down, at which point he will feel some “machinery”. Once you destroy that, then you’ll find an underground cave, which then can allow Human Torch help him to escape.

When not stuck under a tar pit, you’ll come across the Circus of Crime, led by the Ringmaster. There’s a cannon here you need to steal, and hilariously, the solution is the same exact one as in the Spider-Man game – just close your eyes so the Ringmaster’s hypnosis doesn’t work, saunter right in, and take it. You can also visit the kingdom of Latveria, though everything is boarded up so there’s not much to do there other than buy gunpowder.

The complexity with switching between characters makes the puzzles even harder. You can adjust the strength of Human Torch’s flame as well as how strongly you want Thing to do something, which is essential to solve some puzzles. (Don’t just throw something, throw it HARD.) It’s also easier to die, and unlike the previous games, there’s no limbo – you either need to reload a saved game or start over. 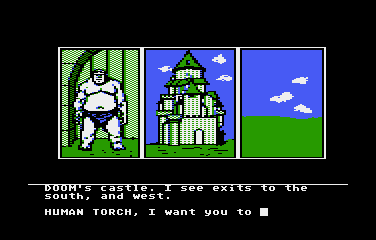 This entry makes a little more sense than the previous ones, in that there aren’t any completely insane conundrums, but considering so much time is spent just rescuing the Thing, in a series of really uninteresting puzzles, and it ends up feeling both more difficult and more aimless than the previous two. The Spider-Man game had a ton of villains just kind of show up and only act as minor roadblocks for puzzles, but at least they were there! Here you meet up with the Blob and Xandu but that’s about it.

The adventure ends just as the other ones, with Chief Examiner giving you a password which ultimately has no purpose. The fourth game was scheduled to be an X-Men title – reportedly, the main development was about 75% complete but none of the visuals had been completed. The tie-in comic was finished though, and eventually appeared in 1987 in Marvel Fanfare #33. Certain versions of this game are also called Fantastic Four: Part One, implying that a later volume would’ve focused on the other two characters.