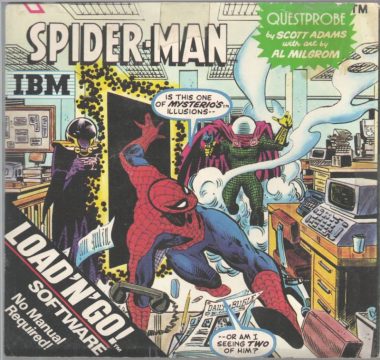 The second Questprobe game focuses on Spider-Man. It’s yet another treasure hunt, as Peter Parker must scour The Daily Bugle office building to collect 18 gems and give them to Madame Web. The coolest gimmick that takes advantage of Spider-Man’s abilities is that you can climb on the ceilings of certain rooms, which rotates the screen so it’s viewed upside down. An early puzzle also involves collecting chemicals and creating web solution, which is used in more than a couple of puzzles. In many of the rooms, you’ll run into assorted villains, including the Sandman, Doctor Octopus, the Lizard, Mysterio, and Hydro-Man. The perspective here is rather interesting too, because you’re not technically Spider-Man, but rather some kind of unseen being, making Spider-Man do your every command (at least, every command that the parser understands). Every command begins with the line “SPIDER-MAN, I want you to” and then you fill in the blank. 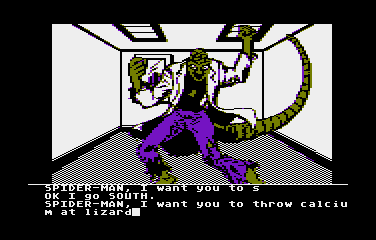 But as typical for Adventure International games, the puzzles here are absolute madness. Probably the outright goofiest is that you need to collect 951 pounds of stuff and stick it on a scale in order to get one of the gems. You need grab a couch, a desk, the bodies of three separate knocked out supervillains (Electro, Doctor Octopus, and The Lizard), and a few other knickknacks lying around. It’s established that Spider-Man is pretty strong, but there’s no universe that he can physically carry around all of this stuff at once, while still being able to crawl onto walls and ceilings, unless he’s doing one hell of a juggling act.

Almost as ridiculous is a part where you need to turn a knob in a room occupied by the Ringmaster. If you try to do this, he’ll use his hypnotic powers to send you right back out of the room. So, you need to close your eyes (which turns everything dark), re-enter the room, turn the knob, hit the appropriate button, then open your eyes. Voila! Since you can’t see the Ringmaster, he can’t stop you! It does make sense, sort of, since the hypnosis won’t work if you can’t see it, but how can Spider-Man see the knob? And why doesn’t the Ringmaster do anything else to stop him? It’s a very Douglas Adams-y solution to just complete nonsense. 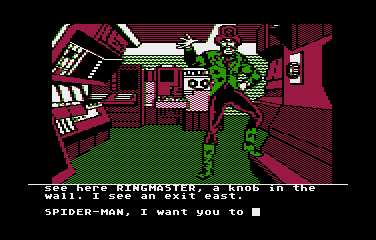 The layout is also a gigantic pain. There are a few main floors you spend a lot of time jumping between, all of which involve crawling up and down an elevator shaft for several turns. This is one of those adventure game-y things that probably sounded pretty cool in theory, but in practice, especially coupled with the disk load times, just walking up and down a set of stairs to change locations would have been less aggravating.

As with the other Questprobe releases, the art is pretty decent, at least, and there are even some simple animations on machines with higher memory. It also uses an enhanced version of the SAGA engine so it’s not quite as clumsy at the Hulk predecessor. The game does feel uniquely Spider-Man in spite of the otherwise boring premise. Still, the puzzles aren’t quite as stupidly difficult, and the setting at least makes some kind of sense compared to the other two games, making this the high point of the trilogy. 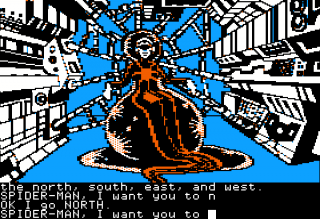 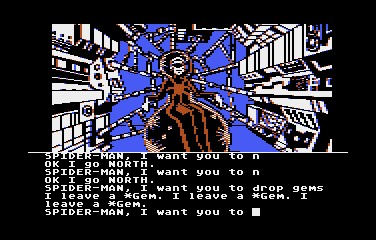