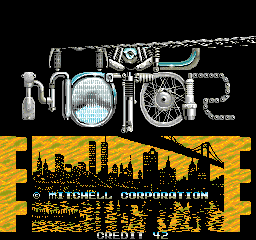 Mad Motor is a game not many have heard of, which is understandable since it wasn’t released. While games are cancelled regularly for various reasons, it’s always unfortunate to see one disappear that actually has the potential to be fantastic. While its developer, Mitchell, is known mainly for various puzzle games, the most famous of which is the Pang / Buster Bros. series, one can see a strong basis for an action game developer in Mad Motor‘s design.

The game is fast, with a constant stream of enemies trying to run you off the road along with a few pitfalls and jumps to navigate at the same time. The game is played a joystick and just two buttons, one for accelerating and one for attacking in whatever direction our hero is facing. The entire time a constant stream of enemies are riding and gliding in try to run our unnamed hero off the road. Fortunately, the resident Mad Motorist, we’ll just call him Mad from now on, as its emblazoned on the back of his cape coat (Mitchell must have had some fans of both Akira and Mad Gear members Two P and J from Final Fight), has a pair of metal tonfa strapped to his arms, allowing him to steer while still clubbing enemies at a distance. The game keeps up the intense pace with a few ambitious techniques players can use to tip the scales to their advantage as well. The best of these is that when an enemy is destroyed, Mad can ride into the explosion to jump into the air, also destroying any vehicles he lands on. Another trick is that if players are moving left as they let go of the acceleration button, Mad will swerve his bike slightly, blocking and damaging anyone catching up to him without taking any damage himself. 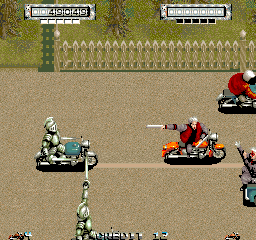 The thing that stands out Mad Motor, however, is what happens when Mad has sustained enough damage from enemies. Players are only given one life before having to pop in another quarter, but when it’s almost empty, Mad undergoes a painful transformation, screaming “I’m alive…WOLF POWER!” as some close up artwork of his change is flashed across the screen. From this point on, a single hit will end the game, but Mad is much stronger, his attacks have a wider range thanks to massive blades mounted on his elbows, and even his bike transforms into a bigger machine resembling some of the vehicles in the Ruggero Deodato action film Atlantis Interceptors. As players become more skilled at the game, it’s worth getting to this point intentionally as one can reach a much higher score by using Mad’s newfound abilities to their fullest. His giant werewolf form is clearly inspired by the art of Go Nagai and wouldn’t look out of place in an issue of Devil Man or Violence Jack.

After defeating the boss of Central Park, level two has players riding over the Grand Canyon (apathetically referred to as “A Ravine” in the game itself). This might lead one to think that Mad Motor will involve a race across the US, but don’t worry, levels three, four and five are called City Island, Desert, River Side, and Cony (sic) Island. So rather than a full road trip, the game takes us in circles, bringing us from Manhattan to the Grand Canyon, from which we return to Staten Island, then go back out west to an unnamed desert highway (is this the Coconino Plateau?) before taking the Belt Parkway out of Coney Island and eventually returning to Manhattan for the final confrontation. The game ends in front of the Chrysler Building. No reason is given for the journey, just brief images of our hero having vanquished each stage’s boss in between levels. 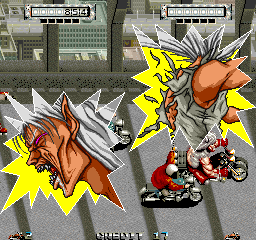 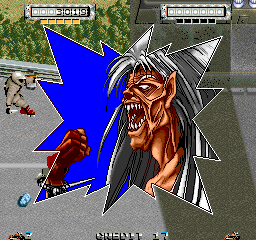 What little character information we’re presented with is a bit out there, even by late 80s arcade game standards when the game’s ending is reached. After racing around New York City (and “A Ravine”), players must defeat a giant samurai standing atop a gold plated station wagon. He has a small dragon helping him out as well, and as an extra touch an endless rain of cherry blossom petals envelops the screen during the entire fight. This samurai refers to himself as The Slasher, and after beating him we’re presented with a nonsensical epilogue where he and Mad careen into the Chrysler building, causing a massive explosion after a brief scene of an alien walking around and two men arguing in an office. The game’s title screen, however, is fantastic, with the game’s title made up for motorcycle parts accompanied by a film strip showing off various enemies of the game in an art style evocative of various US and Japanese punk and gang films like Burst City.

All of this makes for a focused and manic game, with vehicles constantly skidding out and exploding all over the screen. It’s very satisfying to learn as well, since one has to actually hit the center of mass of an enemy vehicle with Mad’s tonfa, making mindless button mashing worthless in the face of good timing. This combined with being able to ram enemies by braking at the right time helps keep up the game’s intense pacing makes for the kind of rewarding experience and control over the combat that all great action games work to achieve. The enemies themselves are all cool and ridiculous in their own way. Players will be fighting against other guys on motorcycles, but also against folks on hangliders, a Citroen van with a peace sign on it that attacks by dumping out an endless stream of exploding miniature version of itself (Mitchell must have been big fans of The Dead Pool as well), guys on three wheeled vehicles that are so chill they lean back in the seat with their arms crossed and steer with their feet, and most importantly an ape. Not just any ape, but an ape donning a crown, gold chains, and spiked Mad Max 2: The Road Warrior styled armor that attacks Mad by jumping off his vehicle onto a helicopter and punching at the player from above. 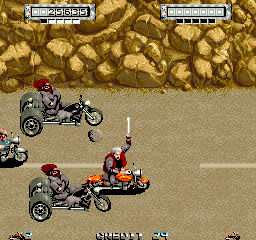 All of this may make Mad Motor sound like one of the best action games ever made. Unfortunately it has a few weaknesses that hold it back from true greatness. The biggest is that visually, it doesn’t hold up to repeated play throughs. The art and enemies are great but the variety is pretty low, and by the third level players will have seen almost every type in the game. The boss fights are also interesting in theory but half-baked with the exception of the final battle and that noble ape in level two. Each involves an enemy or two that must be destroyed along with some assisting vehicle, but many of these are actually the regular enemies you’ve already been destroying throughout the game. On top of that, while the background graphics are fine for a 1989 game, most of the screen is taken up by the road itself, which quickly becomes monotonous.

While games like this will often inspire a small cult following, Mad Motor remains completely forgotten, but with good reason, it likely only received a limited location test. While it’s notoriously missing from the remnants of Mitchell’s former official website (the company suspended all operations in 2012), the erotic gambling game Poker Ladies is also missing from their archive. Poker Ladies and Mad Motor would represent their earliest games, with the former receiving a wide release by Mitchell itself. Mitchell would release various gambling and puzzle themed games over the years (along with the cult game Osman in 1996), making Mad Motor a very unique title for the company.

The answer to the nature of its distribution may be in the game itself. During the Desert level, players will pass by several billboards in the background advertising various made up goods and services. Among them however, we can see the hand of Data East via a billboard advertising RoboCop 2! Mitchell and Data East have collaborated and shared talent a few times over the years on games like Funky Jet (1991), and a 1989 release would have put it right in between Data East’s arcade adaptations of RoboCop (Fall 1988) and RoboCop 2 (Spring 1991).

Mad Motor never existed beyond a location test or two, but it’s actually a good aesthetic fit for other arcade games published by Data East of the era like Two Crude and RoboCop itself. This would imply that Data East was preparing to push the game as much as their other titles featuring cameos of mascots like Chelnov and Karnov, but it may have been canned less for quality issues and more from Data East’s then new focus on home consoles thanks to the popularity of Karnov and Bad Dudes as well as the cult following growing around role playing games less suited to arcades like Data East’s own Metal Max.

More interestingly, however, Data East would also use a werewolf with blades augmenting his arms in their 1990 NES game Werewolf: The Last Warrior! Werewolf was developed by SAS Sakata, but at the time this developer was a company that existed mainly to develop and port console games for Data East itself. From this. So while Mad Motorlacks any credits, it is possible to take a stab at figuring out who some of the people responsible for it are. Most prominently, we see the names Takafumi Miura, T. Watanabe, Yousuke Takahama, Motohiro Umeki, and Eiichirou Nakatsu. All five performed programming, charater design, and graphic and sound design work for NES ports of Bad Dudes vs. Dragon Ninja, RoboCop, Werewolf: The Last Warrior, and Cobra Command (among many other Data East games). 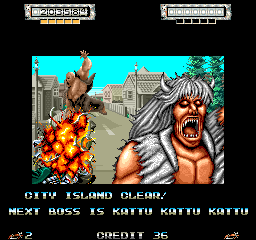 Despite Data East’s work for SAS Sataka focusing on porting their arcade hits to the NES, Werewolf isn’t actually be ported from anything. Its brief cutscenes, however, bear a bit of an artistic resemblance to Mad Motor‘s own transformation sequence along with some similar NYC inspired urban sprawl. There’s a bit of a musical similarity to Mad Motor too as both characters may switch between human and wolf forms regularly depending on their energy. It’s the most Data East like soundtrack Mitchell has ever produced. Most intriguing however, is that Mad Motorconcludes with Slasher soaring away from the Chrysler building with Mad in tow. This somehow causes a cataclysmic explosion right after the sighting of an alien life form and some people witnessing Mad’s antics.

Almost as if picking up where Mad Motor leaves off, Werewolf: The Last Warrior begins in a world recently taken over by a mix of aliens and a scientist creating biological horrors depending on what region one is playing the game in. Several of Mitchell’s early games (Mad Motor included) have no credits, making it difficult to verify how closely they and Data East have collaborated. However, with it coming out so close to Mad Motor‘s intended release date, it would seem like it’s a natural evolution or maybe even an intended companion and sequel game of the concept after a poor showing in arcades. It’s a shame Mad Motor was never completed, as what’s there is the basis for a fantastic game and is already close to completion.