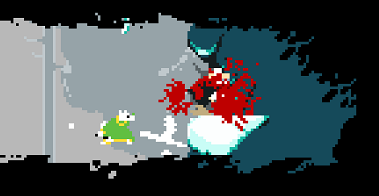 Samurai Gunn is one of the most accessible fighting games you’ll find. It has nearly no learning curve, nothing you need to know before you begin to feel in control; timing, reflexes and strategy alone determine the outcome. Yet it is not a game that tires quickly. This balance is achieved by adhering to simple combat mechanics, while relying on freedom of movement and interactive arenas to provide endless variations in the fighting. 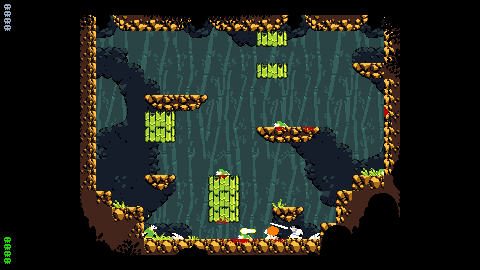 It is complemented by its approach to characters. They may have names and sprites of their own, but they’re essentially avatars: all play the same. There is no need to worry about how one particular fighter fares against every possible opponent; every matchup is the perfect matchup.

Each fighter has a sword and a gun loaded with three bullets. One hit kills, and the first to reach 10 kills wins the game. You swing you sword in the same way to attack, parry, or deflect a bullet back at the opponent. Bullets can be smashed back-and-forth as if they were tennis balls, but the timing it requires is precise enough that it’s hard to keep it up for long.

Battles resulting in a tie or a 10 to 9 score are settled by a Showdown between the two leading samurai (see what they did there?) The stakes feel much higher, as victory hinges on a single slash of the sword; guns may not be used. Showdowns have their own stages. Highlights include a battlefield where arrows rain down from the sky and a duel in the dark in which the fighters only become visible for a brief moment whenever lightning strikes.

As you grow familiar with the game, more subtle elements become apparent. You can switch to an alternate stance by holding the attack button for a moment, providing an advantage if you attack from certain angles. You can pull successive attacks faster if you time them carefully rather than mash the attack button. There are techniques that allow you to jump higher or lunge forward. Swinging your sword pulls you forward a bit, while firing your gun pushes you back, which affects the timing of battle. When swords clash, the fighter who swung last is stunned and thrown back some ways; if both swing at the same time, they just bounce back a bit. 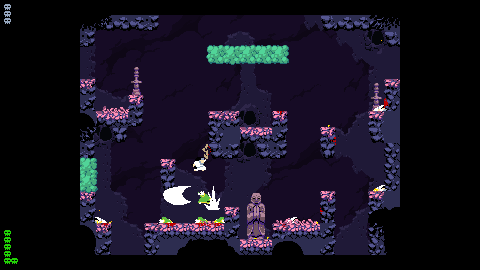 The battle arenas are divided into four domains. Forests have foliage which can be cut down or act as platform. Sometimes they hide rocks, which turn into spikes if you hit them again. The frozen lands contain large icicles that fall off when hit, potentially killing an opponent; once fallen, they can act as temporary shields. Some of them also have water around the bottom, which renders your gun unusable until you respawn. There’s a domain made of strange mechanisms and wooden platforms; these move on their own to crush anyone who gets stuck behind (or beneath), but they can be turned around by firing at them. The last type of area is dark and filled with gravestones and Buddah statues. Bright green vegetation hangs from parts of the ceilings; you can hang from it and fight upside down.

All stages act as flat representations of circular spaces, so that if you shoot at an opening on the right side of the screen, the bullet will reappear from the left; likewise, you can jump down a hole at the bottom and emerge from the top. 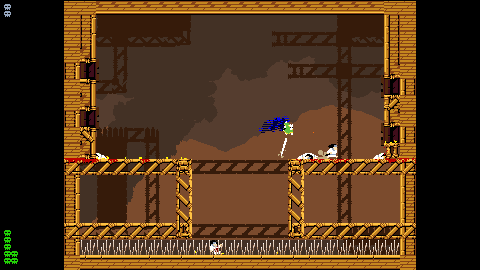 More than anything, Samurai Gunn aims to be a local multiplayer experience. There is no online play, nor, for that matter, is there a storyline. With 4 players, it’s a party game: whether you play in teams or go for a free-for-all, it’s a lot of fun, but too chaotic to keep up for long. 2 player versus is where the true game’s at. This is where you’ll start to think of tricks and tactics: “if I shoot two bullets back-to-back, he’ll have to jump to avoid them, so I’ll jump and fire the third one to try and catch him in mid-air.”

Without friends willing to play with you, there’s really not much point to Samurai Gunn. The only mode playable in single-player is Survival, in which you fight ninjas controlled by the CPU. It’s rather dull and aggravating, as their behavior is incredibly random. If you’ve ever wondered how an insane, drug-addled pack of ninjas might fight, it’s as likely an answer as any.

The graphics might turn off gamers unaccustomed to indie games, with their tiny sprites and simplistic environments, but the fast-paced action is undeniably entertaining to watch. Deaths are cartoonishly violent, bloodstains and bodies accumulating as the battle rages on; you can even lie down among them and play dead to try and catch an opponent by surprise.

A dark, horror-themed rap song plays over the stylish title screen, but the music in-game is minimalistic, one of many elements suggesting a Bushido Blade influence. The characters are named after famous Japanese directors – Hayao (Miyazaki), (Akira) Kurosawa. Though the difference is only visual, several secret characters can be unlocked, including the stick figure from Nidhogg.

With the numerous updates since the original release, quite a few options have been added. You can turn the death requirement up to 30, or replace blood with cherry blossom petals. In addition to the standard versus mode, there’s Master of the House, where you fight in a stage from each of the four domains to determine the true winner; Showdown Shogun does the same for Showdowns, though it suffers from an overlong wait between battles. If each player wins two, the outcome is determined by a special Showdown fought in front of a giant moon which creates a great silhouette effect.

While it received some hype before and around its release, Samurai Gunn didn’t quite obtain the success it deserved, with many reviews concentrating on the chaotic 4-player mode instead of the more rewarding 1v1. Gamers used to bulk purchases of cheap Steam games they may or may not ever play may balk at its price tag, but it is far from unreasonable considering the mileage you can get out of it. With a bit of luck, perhaps the popularity of Hyper Light Drifter, whose battle system was designed by Samurai Gunn creator Beau Blyth, will help revive some interest.

One Must Fall: Battlegrounds