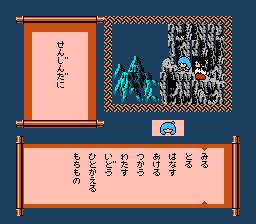 As the Japanese adventure (ADV) game genre kept increasing in popularity throughout the 1980s, games became more ambitious in terms of graphics, text and storylines. On microcomputers, where the genre had had its beginnings, using multiple disks or tapes was a standard solution when software grew in scope and size, but consoles such as the Famicom were struggling with size limitations since cartridges were costly to produce and limited in ROM size. Many of these issues were overcome by the Famicom Disk System (FDS) peripheral, which took double-sided rewritable diskettes that could be produced at a fraction of the cost of a cartridge. Naturally, adventure games thrived on the system. Famicom Mukashibanashi: Shin Onigashima (1987) was Nintendo’s first foray into the genre and differentiated itself from the murder mystery craze that had exploded in the wake of the Famicom port of Portopia Renzoku Satsujin Jiken (1985) by basing the game on folklore rather than police procedurals. The game was developed by PaxSoftnica in collaboration with Nintendo R&D4 and was the first FDS game that came on two disks: Zenpen (前編; first part) and Kouhen (後編; last part); in total only six two-disk FDS games were officially released and all of them were ADV games. 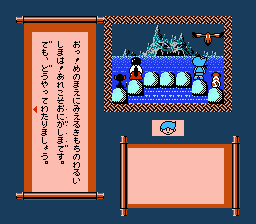 Famicom Mukashibanashi (“Famicom Fairytales”) is a series of three adventure games based on traditional Japanese and Chinese folktales. The inaugural game, Shin Onigashima (“New Ogre Island”) takes its core story from the tale of Momotarou (“Peach boy”), who is a strong and brave child born from a giant peach found floating in a river. Years later when the village is terrorized and plundered by a group of oni (Japanese ogres), Momotarou leaves his foster parents to take revenge, and in the climax of the story sails to Onigashima (“Oni Island”) together with a dog, a monkey and a pheasant and defeat the oni. The “Shin” (新) in Shin Onigashima, meaning “New”, is there to imply that the game is a modern take on the story, and the final product is an amalgamation of elements from Momotarou and three other popular Japanese fairytales: The Tale of the Bamboo Cutter (“Princess Kaguya”), Urashima Tarou and Kintarou. In line with the folktale theme, the games are presented in the traditional vertical, right-to-left “tategaki” writing format, which to this day is the standard format for Japanese novels, but is quite uncommon in video games. 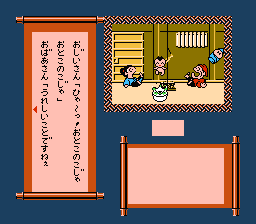 The scenario of Shin Onigashima was written by director Tatsuya Hishida, who combined the four main tales into a plot that is both recognizable and its own unique thing. One day a childless old couple magically finds two children: while out picking firewood, the man finds a baby girl inside a glowing bamboo tree (“Princess Kaguya”), and while doing laundry in the river the woman finds a floating bowl, that when she later at night fills it with warm water to prepare dinner gives birth to a blue-haired, caveman-like boy (“Momotarou”). The default name for the boy is Donbe, which likely is a reference to how he was born from a donburi bowl; the girl is named Hikari (“light”, ”glow”), in reference to the glowing bamboo tree. Eight years later, a powerful dragon called the Avatar of Darkness appears over the capital, stealing people’s souls and turning them into oni. That night, the children meet Kintarou, who tells them of their unusual origins and how they should seek the river god for more details. When they return home, they see how the village is being raided by the oni, who capture the souls of the villagers in a magic bell. Aided by Kintarou’s advice and a pair of magic jewelery, the children set out to save their parents. On the way they are joined by the three animal companions and a deity named Hinoe-sama who guides them towards defeating the dragon. The journey eventually takes them to the dragon’s stronghold on Onigashima, where the human souls are being kept. 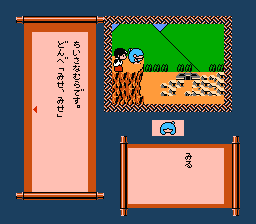 Shin Onigashima takes a little different game design approach than other contemporaneous Japanese ADV games by letting the storytelling take a back seat in favor of puzzle solving – both on the large and at the small scale. Outside of the first two chapters that set up the plot, the main story mainly progresses in cutscenes between chapters, while the actual content and gameplay in each chapter instead tend to focus on short, self-contained adventures and their string of tasks (e.g. infiltrate the fortress, navigate the mysterious forest, rescue the prisoner, etc.). The puzzles themselves are also less dialogue-driven than in the ADV genre in general and instead tend to focus on interacting with objects rather than talking to characters. These design choices, as well as the fairy-tale theme and how the kids are present on screen at almost all times (unlike the first-person view commonly used in ADVs), actually make the game quite reminiscent to King’s Quest and its archetypical Western graphic adventure game design principles; that is, on top of being a menu-driven, text-heavy and intrinsically Japanese game. 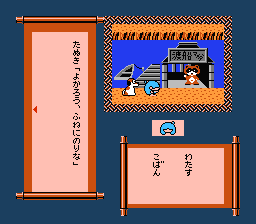 The chapters typically consist of up to ten different screens that you need to move between while picking up objects and occasionally talking to characters. You control one child at time, but can often switch to the other sibling and use their individual skills and inventories. Donbe is more physical, can fight, carry and climb, and Hikari is more cerebral and better at talking, thinking and deducing. The two different characters and the focus on doing over talking tend, however, to make the game more difficult than other ADVs of the time (many of which could be brute-forced by trying all options at all screens). There are also many scenes where you can die: either by picking the wrong option or by not picking an option fast enough. Upon death, you are returned to the beginning of the chapter and not the scene you were in, which often forces the player to replay large chunks of the chapter. The save feature operates in the same way and returns the player to the chapter beginning rather than the current scene; this is possibly a backhanded way of handling the few instances where you can end up in unsolvable states. The two sequels fixed many of these issues, and went for a more traditional and dialogue-driven ADV design, and are as a result less difficult than Shin Onigashima. 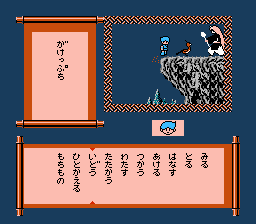 The tone of the Famicom Mukashibanashi series is generally very light-hearted and occasionally silly, which sets it apart from the often very serious atmosphere of its 1980s ADV genre peers (the next game in the series, Yuuyuuki, would go full silly, but Shin Onigashima is more balanced in this regard). The Zenpen disk of Shin Onigashima leans more towards comedy (Kintarou is e.g. played as a recurring comic relief; he wears sunglasses with his trademark bib and speaks in an off-beat English written in hiragana rather than the usual katakana), whereas the second disk (Kouhen) marks a shift towards that classic sense of adventure and peril found in many fairytales (here Donbe is older after being transformed by a magical hammer, and is, sadly, developed into yet another bland and generic boy hero). The music does a lot of enforce the sense of adventure, and mixes traditional-style Japanese compositions with 1980s video game action and suspense tunes. 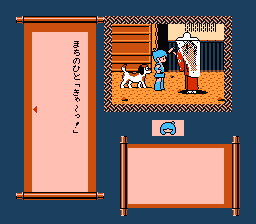 Both tonally and in the way it congregates multiple well-known tales into a larger story, Shin Onigashima does something similar to what Dreamworks would do for Western fairytales about a decade later in 2001 with Shrek (a story, which incidentally, also is centered around ogres, albeit the troll-like Western type). Contrary to what many English language texts on Shin Onigashima might say, it is not necessary to be familiar with the tales that the game is based on, as the story is told from the bottom-up, explaining and introducing things as the narrative goes on. However, just like when watching Shrek, an extra layer of enjoyment will most likely be had by understanding the references, and since the four main stories used in Shin Onigashima are available in English and are not very long reads, reading them before playing the game is recommended. For instance, the versions of these stories included in the first ever English language collection of Japanese fairytales, Yei Theodora Ozaki’s Japanese Fairy Tales from 1908, are perfectly suitable versions that have entered the Public Domain and can be read for free on Project Gutenberg. 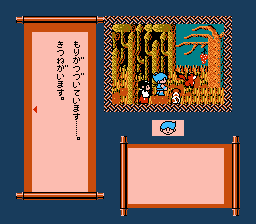 Shin Onigashima is a fun piece of Japan-only Nintendo history and has been kept alive by re-releases and cameos. A Zengouhen (“first and last part”) version that combined both disks and removed the need for disk swapping was released in the Famicom Mini series on the GBA, and this version has subsequently been released on the Wii and Wii U Virtual Consoles. A 1996 “gaiden” (side-story) sequel was released for the Satellaview satellite broadcast peripheral for the Super Famicom, and proved popular enough to later result in a cartridge release (Heisei Shin Onigashima). While Nintendo’s other big FDS adventure game series Famicom Detective Club got a 2021 Switch remake in English, chances that we will see a similar treatment for Famicom Mukashibanashi are slimmer for two reasons: the rather unknown status of the fairy tale source material outside of Japan, and that the vertical writing format is difficult to convert to Western writing systems. The latter also complicates fan translating the game, which (at the time of writing) is yet to be done. 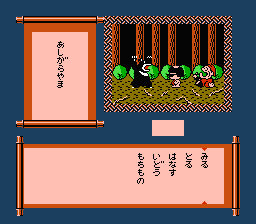 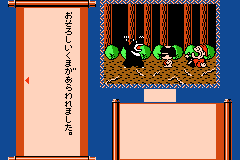 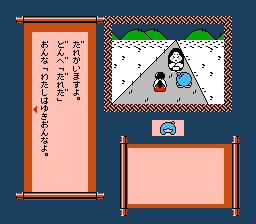 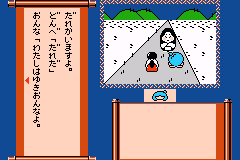 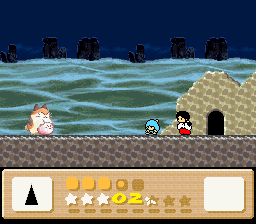 A heavily redesigned Hikari featured as one of the characters in Captain Rainbow (Wii, 2008; image from the official homepage). In the game Hikari is addicted to romance novels, which is a nod to Chao from the Yuuyuuki, the second FamicomMukashibanashi game.

A previous HG101 text on this game has appeared in:

An annotated walkthrough with story summaries for those that do not read Japanese:

Public domain translations of some of the fairy tales

Promotional material for the game

Japanese fan page for the series

Instructions on how to get to Tengu’s hidden quiz at the end of the game (Japanese site; see last bullet on the list)

Famicom Detective Club Part II: The Girl Standing in the Back