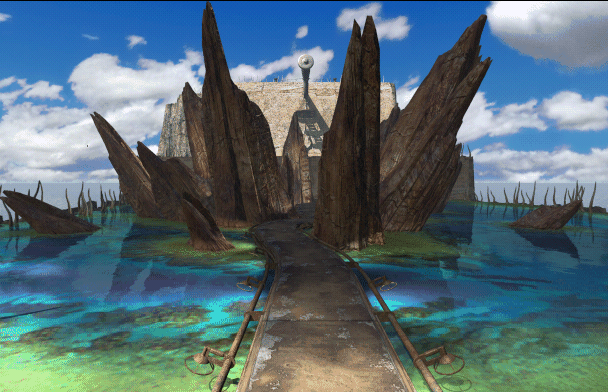 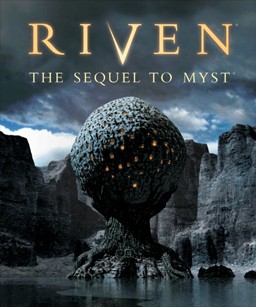 Myst was a runaway hit and sold millions of copies. Since they were now basically drowning in money, Cyan decided that their next project was going to be bigger, better and more expensive – as in multi-million dollar expensive. This was not going to happen with a rag-tag team of seven people, so the Miller brothers hired new 3D artists, bought new computers and upgraded their offices. The development of the game was apparently pretty tense, as it understandably is for a relatively new team thrust into a big-budget project that lasted four years. After the game was finished, Robyn Miller decided to leave Cyan to pursue personal projects, which means that Rand Miller would then become the sole spiritual father of the franchise.

Was all this effort fruitful? Certainly. In 1997, it was something the world had never seen. Riven was the best looking game of its day, and reaches levels of photorealism very praiseworthy even by today’s standards. The 2500 images of Myst would become 4000 images on an adventure spanning five islands and an equal number of CDs. The game was once again made out of stills created with HyperCard, but the level of detail increased exponentially and the black borders around the game window are almost gone. The game featured many more videos, fullscreen ones, including mine cart and hover train rides between the game’s islands which were eye-poppers for the day. 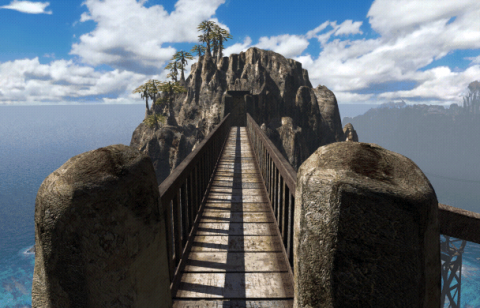 Riven starts out where Myst ends, with Atrus giving you the mission he was alluding to in the previous game: save his wife Catherine from the age of Riven and make sure his father Gehn remains trapped there and unable to cause trouble. Atrus is not on good terms with his dad. Unlike its predecessor, this game has only one main age, the eponymous Riven, which is separated in five islands. The original packaging includes a very well done box for the game discs and each CD sleeve has some interesting artwork on it. Some adventure games provide printed documents like journals and codebooks with the CDs to create puzzles before the game has even started. Riven has a similar, but somewhat subtler approach. Look at the artwork closely, as it contains some veiled hints about the puzzles and the context of the story.

The fact that there are five CDs and five islands is not just a gimmick, as that number is a recurring motif throughout the game. You see, Riven is Gehn’s fifth age and his best writing work, which isn’t saying much considering the world is falling apart on a structural level (bad grammar, maybe?). That doesn’t stop Gehn from obsessing over the number five, which is a magic number in the context of this game. This could make a good drinking game – anytime you see something related to the number five in Riven, have a drink. Speaking of numbers, the mythology of the D’ni is fleshed out much more in this game and one puzzle will require you to learn the basics of the D’ni numerical system. 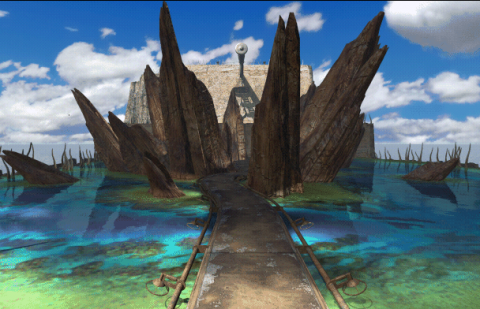 When it comes to immersion, coherency and overall quality of the world, Riven is really a step above Myst in terms of worldbuilding. This seems to show that Cyan’s talents had really matured in a few short years. All of the islands are interconnected, and a lot of little things have their story to tell. Subtle signs can be seen of Gehn’s despotism and obsession with writing ages, as one island has been razed to produce paper and another has been turned into factory to manufacture the tools needed to further Gehn’s ambitions. Most of the vistas show a breathtaking amount of detail. A fishing village filled with round stone huts built on piles. A tiny forest, lighted by paper lanterns, filled with strange flora and golden scarabs, the only area somehow spared from destruction. A lonely bay inhabited by sunbathing aquatic dinosaurs. A gilded temple, filled with food offerings to an animal god. And so on.

The sound quality has been ramped up quite a bit as well. The effects are much more natural and sound much less like they were processed through a computer. The music is once again quite sparse, leaving place for the gorgeous ambient noise of the wind blowing, insects buzzing and birds singing. It is somewhat odd that you can hear chickadees on Riven… it doesn’t seem like the kind of bird you’d find in an alien universe, but hey, it’s nice to know the little guys are finding their way in the world.

There are still a few inexplicable gizmos just lying around to give your brain some trouble, but that’s what puzzle games are for, right? To be fair, the majority of machines have actual in-world uses, most of them being devices employed by Gehn to cement his power. For example, that weird spider-like chair is actually a 3D recorder used to project messages to his amazed followers in his temple. It’s interesting to compare what those devices were intended for and what the player does with them, like using an execution device as an impromptu elevator. 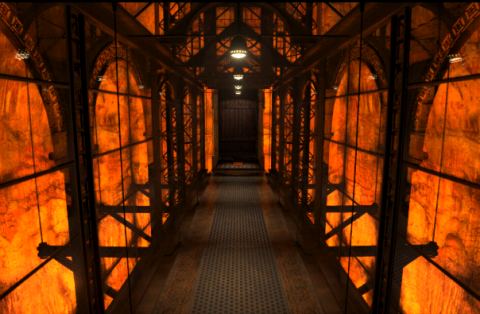 Riven is essentially two large puzzles, but they’re two devious head-scratchers which will require you to travel to all the islands to discover what they are, exactly, and piece together the information on how to solve them. The upside of having just two large puzzles is that you can explore most of Riven while thinking about them, since both lock away tiny but crucial areas of the world, instead of being roadblocks that must be solved right now before moving on to the next riddle. Hints to solve both those puzzles are everywhere, it’s just that those hints don’t always have the decency of telling you what they are. Going back through the game a second time, it’s amazing to see just how many hints are thrown at the player that that don’t really seem to be important.

Obviously, you’ll also have to tackle smaller, more mundane challenges, like opening locked doors, extending bridges and fiddling around with machinery. In that vein, the very first obstacle is deceptive – a very flimsy-looking wooden door with a padlock on it, preventing access to a cave. Aren’t those annoying? Those stupid doors you could usually break or crawl under only to have to walk all around the world to find a key for them? You could search that key for a long time before simply deciding to just click on the floor and crawl underneath the door. Each island is contained on one CD and you need to switch discs each time you move on to another, so prepare to see that “insert CD” prompt a lot if you’re at a loss as to what to do next. The rereleased edition contained on one DVD does not have that problem, obviously. The game has ten endings, but there is a single good one and all the others are bad endings punishing you for doing something stupid (like annoying Gehn into killing you, which is still pretty funny). It seems like Riven is a much harder game than Myst, but the difficulty of a puzzle is extremely hard to judge – sometimes you “get it” and sometimes you don’t. 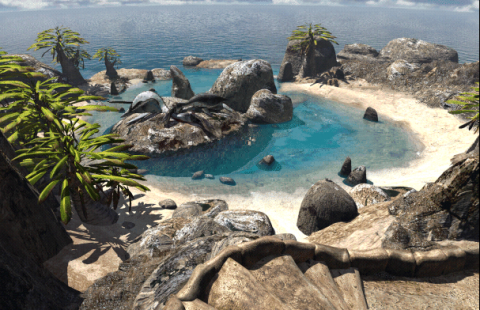 D’ni was introduced here as a fully fledged language, so the more motivated fans can even translate their writing to get some extra background info. Important journals are thankfully written in English since they are a necessary read if you want to have any hope of finishing the game. If you started playing games to get away from reading, then Riven isn’t for you.

Although there’s very little human interaction in the game, the few actors help give the universe a lot of credibility. Gehn is fittingly theatrical and falsely civil… and he can also belt out a mean “O Sole Mio” in a secret Easter egg. The actress portraying Catherine is surprisingly pretty, which makes meeting her up close a pretty good reward for freeing her and saving the day, especially after all that wandering alone you’ve been doing. You can also catch a glimpse of some of the natives of Riven whom, subtly enough, do not speak D’ni. They speak “Rivenese”, which is really a dialect of Papua New Guinea. In fact, the incomprehensible guard you meet at the beginning of the game starts by talking to you in Rivenese, then uses a sentence in D’ni probably taught to him by Gehn to “greet” newcomers. Seeing that this doesn’t work, he goes for the more universal approach of robbing you. 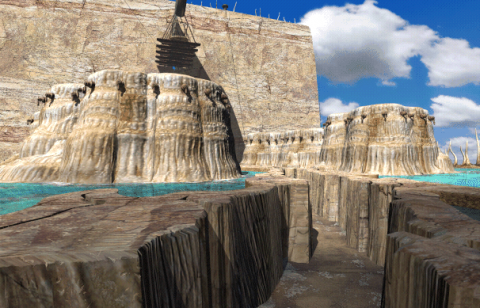 There’s another situation worthy of elaboration. In Gehn’s bedroom, you can find a spherical machine with a lever on it. If you activate the lever, you will see a video of a woman saying some gibberish: “Blurga? Scrugla pridla bugga.” Boring, right? Well, you have to understand that this woman is in fact Gehn’s wife and that the D’ni words she is saying can be translated as something like: “Is this thing on? My dear Gehn, I will love you for all eternity”. Considering the woman in the Imager looks thirty-ish and Gehn looks almost seventy, it really makes you wonder: How old is this video? How many times has Gehn watched it during his thirty years of confinement in a lonely world? It almost makes you feel some sympathy for the despot he’s become. You can also find his journal on his desk, where most of his writing is steady, self-assured descriptions of his nefarious plans, except for a single entry about his wife. It is extremely pale and shaky, ending in a smudge that suspiciously looks like a single tear. This is really mind-blowing – it’s got to be the most understated tidbit of background information in a video game. How many games require you to have knowledge of an imaginary language to understand all the nuances of its story? And Riven is literally full of little things like these, which most players will probably never notice.

All in all, Riven is amazing both from a technical and artistic perspective; it is also a masterfully created universe in terms of coherency and depth, plus the puzzles should really get your gears turning. It is one of the high points of the adventure genre.