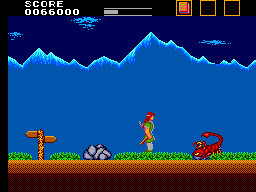 As one of the few “Adventure Role-Playing” games on the Master System to follow in the wake of Phantasy Star, gamers picking up Lord of the Sword likely hoped for a large-scale quest that could satisfy their inner adventurer. The box implies something similar in scope and mechanics to games like Zelda II or Castlevania II, but in reality, it plays out more like Wonder Boy in Monster Land, an odd mishmash of arcade and RPG design philosophies that never quite commits to either direction. But while Monster Land provided enough secrets and depth to justify its blending of genres, Lord of the Sword crumbles beneath the weight of its ambitions, succumbing to the most frustrating parts of arcade games while failing to provide the empowerment that comes with RPG progression.

Things are off to a bad start in the land of Baljinya – followers of the demon lord Ra Goan have murdered the royal family and are plotting to resurrect their master and put him into power. In response to this, the elders of Baljinya have arranged three tests in order find a person worthy enough to stop Ra Goan and become the new king of Baljinya. The hero of the story, a burly man named Landau, takes the elders up on their challenge and sets off for the town of Amon to find his first lead. 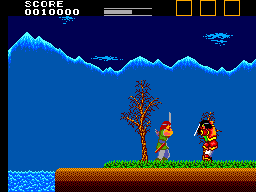 The three tests are as follows: find the tree of Marill, which serves as the symbol of the royal family, subdue the goblin of Balala Valley, and destroy the statue of evil, which turns out to be none other than Medusa herself. Despite the setup here, the three tests aren’t the centerpieces of the game as you’d expect. There’s no fanfare whenever you complete a test and it’s actually possible to skip the third test entirely by accident! In practice, the tests are more like suggestions on what to look for as you explore the world in earnest.

Armed with only a sword and bow, Landau’s actions aren’t any more complex than your average action game. Your standing slash covers a wide range and you can do a crouching slash to hit smaller foes. The bow takes a second to ready, but fires quickly across the screen, making it your safer option. There’s also a trick that allows you to slash extremely quickly by holding forward while doing so, something that is practically essential to know. While this simplicity makes for intuitive combat, it never evolves beyond this and the strategies you figure out early on will apply for the entire game. You do get a few upgrades for your sword and bow, but these only provide power boosts. Satisfying RPG gameplay relies heavily on providing the player with more options to consider in every encounter, so the lack of options in comparison to something like Zelda II’s magic or Monster Land’s range of equipment is very noticeable. 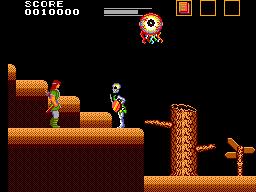 Don’t think your quest will be a breeze though, because Lord of the Sword has some of the most obnoxious monsters around. The game loves to throw small enemies at you like snakes and worms and every screen has plenty of foes you’ll have to work through. You’re assailed in all directions, so between the far too prevalent birds that fly at you from across the screen, the thieves that somehow teleport above you, and the scorpions that move ludicrously fast, it’s extremely easy to die in this game. Inventory management isn’t a factor here, so the only way to heal is by defeating bosses or by talking to the lone NPC that populates each town. To make matters worse, you’re only given ten credits (one life per credit) to complete the game, with no option to save or get a password, so players should expect to commit at least a few hours per sitting. Continuing restores you to full health and keeps you in the area where you died, but it’s all too easy to waste continues just trying to figure out what to do. Oddly enough, boss fights tend to be easier than the enemies you fight on the way to them, since their patterns are simplistic and fairly easy to manipulate to your advantage.

In general, Lord of the Sword’s obtuse structure is its biggest issue. The land of Baljinya is made up of several towns linearly connected by a variety of grasslands, forests, mountains, and caves. You have a map, but it’s just an illustration of the land without any indication of where you are or what anything is, making it completely worthless. You’ll have to judiciously talk to every NPC you meet multiple times, since they don’t always divulge the information you need the first time. Some events are triggered by completing seemingly unrelated things and the order in which you have to complete tasks is punishingly strict for such an otherwise open game. Even if you’re aware of the location of a boss from a previous run, going there without satisfying the right conditions first will cause that boss to not show up, resulting in wasted time and a good chance of dying on the way back. A prominent example of this lies with the town of Shagart – multiple NPCs throughout the game will tell you that something’s afoot with thieves there, but in order to gain access to their den, you specifically have to rescue the daughter of Lindon’s mayor first and have her tell you the same thing before you can go there. This was likely done to prevent players from skipping chunks of the game, but it still feels needlessly arbitrary and inelegant. 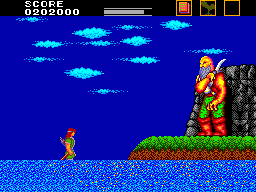 Lord of the Sword has a rather strong presentation overall, with large, well-animated sprites and good use of background details to make each type of location visually distinct. Landau’s sprite in particular is a highlight, detailed enough that you can see his legs and arm muscles animate in sync with his movement, though having such a large sprite does unfortunately make you easier to hit. There are only a few songs in the entire game, but the one that accompanies the majority of the game is a really strong, rousing track that makes one feel like they’re embarking on an adventure. Much like the use of “Bloody Tears” in Castlevania II, if the track is good enough, it can hold up throughout the entire game. FM sound is also supported here, which does wonders for the soundtrack.

With some tweaks or more focused design, Lord of the Sword could have been one of the best action RPGs of its time, but as it stands, it pales in comparison to the likes of Zelda II and Faxanadu and really doesn’t feel like a RPG at all. It was a victim of the ongoing transition from arcades to early console gaming, where developers were still carrying over tendencies meant specifically for the arcade environment. Still, there’s some fun to be had here, between the action itself being solid enough and its world being more ambitious than its pure action contemporaries. It’s a shame this one will probably never get a remake, because it could easily become something great under the purview of a modern lens.