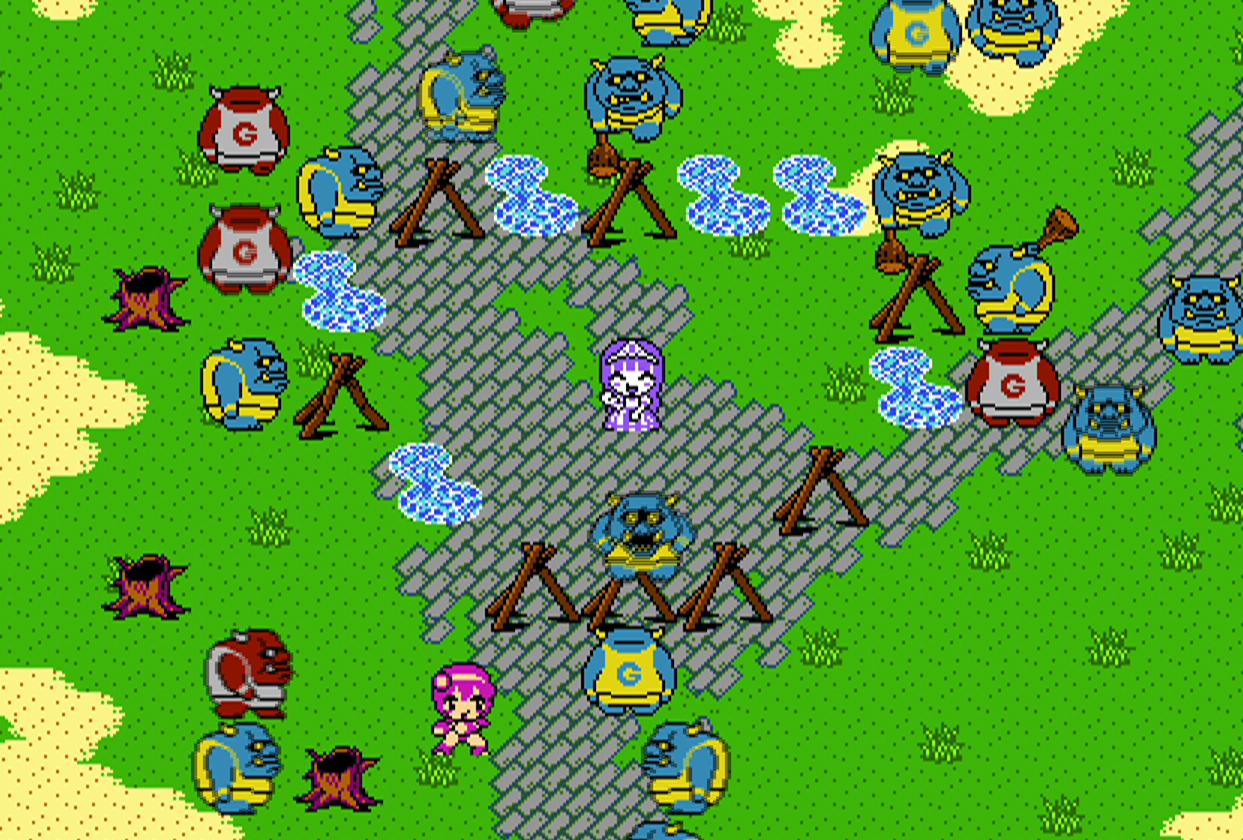 This entry is part 1 of 1 in the series Protect Me Knight
Protect Me Knight
The Xbox Live Independent Game Marketplace was an interesting experiment on Microsoft’s behalf, offering an open place for pretty much anyone to sell their games on the Xbox 360, free of any vetting or publisher interference. As can be surmised, most of it was cheaply hacked together crap, though many of the better games have since gone on to better lives on services like Steam. While many XBLIG games were Western developed, a few smaller Japanese developers put out titles here, either porting their Windows-based doujin games or creating new ones. One of the few that’s still sitting in limbo, to permanently disappear once Microsoft shuts off the servers, is Ancient’s Protect Me Knight.

The game’s main premise is that it presents itself as a lost retro game – when you start, the game’s titles are glitched, and you need to blow into the cartridge in order to get it to work. (A similar theme was found in the Game Center CX / Retro Game Challenge DS games.) NES-style throwbacks have since become common, but it was still fairly unique back when it was released in 2010. But Protect Me Knight doesn’t merely rely on the nostalgia gimmick – in fact, it’s arguably secondary to the game itself, which is completely unlike anything seen back in the 8-bit era.

Rather than taking on the role of a typical side-scroller, like so many other retro-type games, it’s something of a tower defense beat-em-up, a retro equivalent of a 2D Dynasty Warriors or similar Musou-style game. At the center of the screen is the perpetually cheerful Princess, who you must protect at all costs. While each level starts out almost empty, it quickly fills with a number of monsters pouring in from all sides, with the main goal of harming the mostly-defenseless maiden. Your goal, simply put, is to smash everything until the enemies’ forces are exhausted. The climax of each stage often has dozens of smaller monsters, with occasional larger foes that act as bosses or mini-bosses.

While simple at its core, there are some stat-building elements that give a little more depth to the game. There are four different character types – Fighter, Amazon, Ninja and Mage – each with their own attacks and base abilities. As you build up combos, the Princess will grant you larger amounts of hearts. These can be used to customize one of four areas of your hero between levels, adding to your health, your weapon strength, the power of your special attack, and your magic regeneration. Each stage also has simple defense structures that surround the Princess, and you can use the hearts to either fortify (or repair) existing ones, or just build new ones. While your main special attack is powered by a regenerating MP meter, there’s also a powerful crowd control move that will deduct hearts instead. Playing smartly, building up as many combos as possible while conserving hearts, is essential to building a powerful enough character to weather the extremely hectic later levels.

Like the Musou games, there’s not much to Protect Me Knight more than smashing tons of enemies, upgrading your character, and then smashing some more, but it’s remarkably fun, as long as it’s played in short bursts. The four player multiplayer (local-only, since it’s an XBLIG title) is also excellent, creating one of the best of its type on the Xbox 360 that isn’t a first person shooter.

The visuals are simple but show a remarkable amount of personality. The Princess proclaims “Defeat F@*#in Goblins” on the title screen, and much of the game’s tutorial text is written in authentic Engrish. Even the small comic stills on the stat upgrade scenes show a remarkable amount of character despite having very little text. The music is all by Yuzo Koshiro (he co-founded Ancient, along with his mother), and it’s all delightfully silly NES-style chiptunes.

Hopefully one day Protect Me Knight will be preserved for play outside of its dying platform. But at least its sequel, which greatly expands on this title, is available on the 3DS, which is still quite alive (for the moment, anyway).
Thanks to Jimmie-TopSectret007 for the help getting screenshots for this article.

Legend of Oasis, The