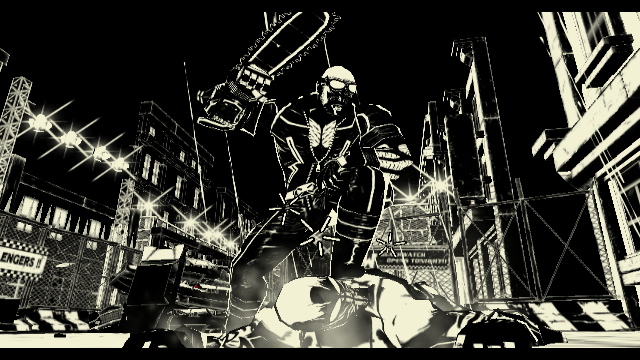 MadWorld is a game that detest you. Well, half of it does, but we’ll get back to that a bit later. The newly founded PlatinumGames, trying to pick up from their Clover days, became interested in an ultra-violent game for the Wii that would stand out among the crowd. Some A+ talent was put towards this goal, including Viewtiful Joe producer Atsushi Inaba and director Shigenori Nishikawa, whom worked on Resident Evil 4 as a designer. Eventually, the team took inspiration from combining Japanese manga style with Frank Miller’s Sin City, which uses black and white with single colors for emphasis. They studied western trends, including the trend of overly violent games like the Manhunt series, and ended up creating the mechanical basis of MadWorld. This game portrayed a city in chaos, with killers on the streets and sadistic games held by mysterious individuals where murder scored the players points and standing. The main character they created, Jack, is a big mass of muscle of frustration, tired of the messed up world he lived in. They had created something completely unlike any other game on the market, much in the same way Clover had previously done with Viewtiful Joe and Okami. 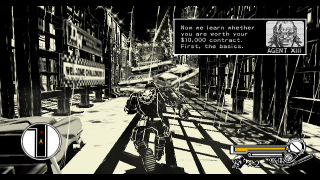 As a game, MadWorld was designed to be much more beginner friendly than their normal output, though it’s certainly not casual. Some nasty enemies get thrown your way, including chainsaw wielding bull men, and it can be easy to be overwhelmed by enemies if you’re not careful. The goal of each stage is to rack up points by killing enemies in creative ways. After getting a certain amount of points, you reach a milestone that triggers a new event in the area, like new weapons or obstacles, or minibosses that will hunt you down through the stage. Every area of the game has a different theme, and all of them rather tacky to match the reality TV theme. There’s an abandoned military base with alien technology, a cheesy looking haunted mansion with rollerblading grim reapers and zombies hanging around, and even a Japanese castle filled with ninjas you can stuff into firework tubes.

The actual controls are a tad clunky, sadly. Still new to the Wiimote, the staff made a lot of questionable decisions, such as having to shake the nunchuck to dodge roll. That particular flaw can easily lead to overshooting your dodge and put you in a bad situation right at the worst time. It also lacks precise timing. This is no Devil May Cry, but the delay can be felt. The camera is forgivable given the limitations, but it’s still a tad awkward in giving you control by centering the camera around where Jack is facing instead of free control. Jack’s running speed also has to build up to use charge attacks, not making him adapt for intuitive combo chaining or crowd control. Most fighting is one and done here. 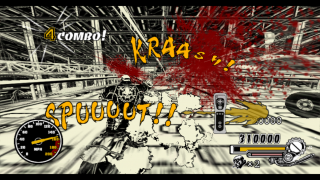 The clunky combat fairs better, though. Jack, being a muscle mountain, does not move gracefully, which is fine. All his hits have a ton of impact and feel satisfying, and most combat is based around quick time event finishers and environmental moves. It’s hard to care too much about the lack of grace when most combat comes down to throwing people into the path of trains or shoving their heads in toilets or flaming garbage cans. You can switch between punches, chainsaw attacks that wear out with a gas meter that recharges when not in use, and grabs. Those grabs are especially useful when trying to line up multikill situations, letting you toss people into mobs to send them all into terrible situations. You can also grab weapons across the area, from simple objects that can be used to rack up score, to elegant killing tools like lances and dual blades. Despite the clunky feel of the game, it has a charm once you get used to it, though it’s hard to ever get used to the poor dodge roll.

It cannot be stated how beautiful of a game MadWorld is. It only uses three colors: Black, white, and red. The red is for the blood, and it is everywhere. It gushes out when you chainsaw enemies in half. It flows when you smash them against spike beds. It seeps when you slam a garbage bin lid on them. Really, it’s easier to list times when there isn’t blood coming from somewhere. It sprays onto the carefully designed comic like levels and contrasts perfectly with the spectacle, and it gets on Jack’s body to boot. It’s the period on all the constant gore and pain the game revels in, and backed even further by gruesome finisher moves. Every boss gets one special to them as well, ranging from being blasted away by their own revolvers to getting dragged around by a chain on a bike. Even mundane actions are nasty, with one of the most common tactics being shoving street sights right into the brain. 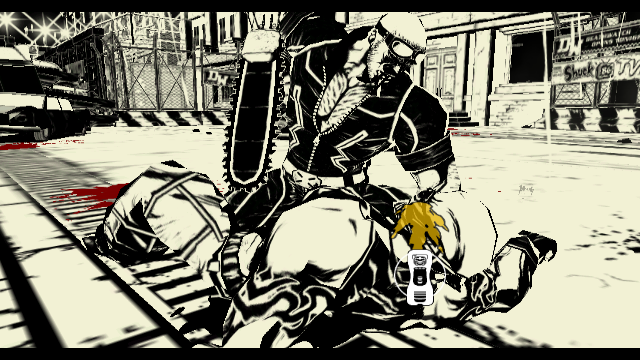 MadWorld is like a terrible B-movie brought to horrible life, and it’s certainly presented as much. Since this game was made for a western market, Platinum looked into getting western voice actors and comedians on staff. The end result are two narrator characters played by Greg Proops (The Drew Carey Show, …Bob the Builder!?) and John DiMaggio (Futurama, Adventure Time) named Howard “Buckshot” Holmes and Kreese Kreely, who may be the most well remembered elements of the game. The two constantly talk over gameplay, commenting on everything and sharing disgusting stories about past Death Watch games. Most of their dialog was even improvised, ignoring continuity with the game for the sake of good jokes, and that was definitely for the best. DiMaggio’s role here is particularly amusing, because you get to hear Bender use really bad curse words, which is way funnier than you’d think. The rest of the voice cast is strong as well, especially Jim Ward as major villain Agent XIII, Steve Blum as Jack, and Reno Wilson’s hilariously overplayed role as The Black Baron.

The soundtrack is also some of the best work in Naoto Tanaka’s career. Remember, this is the man who composed most of the Mega Man X series, the Ace Attorney franchise, and Bayonetta. Saying MadWorld is one of his crown jewels on his record is not something said lightly. He sampled a ton of western rock, rap, and hip hop during composition, created some truly sick beats, and then invited some small time western rappers to record for each track, mainly using Ox, Sick YG, and Doujah Raze. Every single talent found for this soundtrack is fantastic, matching the speed and intensity of each track almost effortlessly. The stand outs are definitely the final boss theme So Cold, credits theme Soul, and the very cheesy Ain’t That Funny? These tracks all fit the campy reality show segments perfectly, while the story segments use simplistic, foreboding beats and silence. 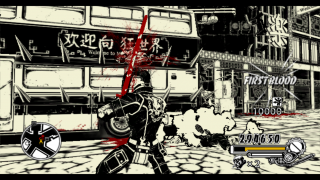 The most interesting part of MadWorld’s development is the story. Platinum Games hired outside the studio for the game’s narrative, hiring on Tactics Orge and Final Fantasy Tactics vet Yasumi Matsuno, who seems like the absolute most unfitting choice for this sort of project. All his work focuses on the humanity within conflicts and complex character dramas. Yet here he is, writing a story for a game where the main element and concept is decapitating dudes with a chainsaw. 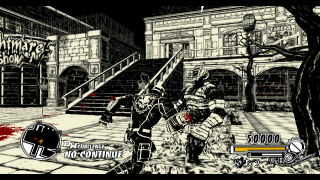 The actual story revolves around a major city being captured and turned upside down by terrorists holding the gross spectacle of the Death Watch games, killing off much of the population via a mysterious disease and sending in the violent crazy thugs to do the rest. Now everyone left is fighting for points in a gory contest to see who the best killer is, while Jack has stepped in as a a surprise contestant of unknown affiliation. He is working with someone, talking with a partner named Naomi during quiet moments, but what exactly he wants and who he is remains unknown. This starts to catch the attention of the people in charge of Death Watch, while Jack is investigating them and ends up helping a survivor named Leo, a hospital intern.

The story segments are a completely different thing from the game proper. These play when Jack isn’t on camera, leaving him to his thoughts and conversations with Naomi, commenting on the perverse spectacle of the games. The music is almost nonexistent, and the atmosphere is thick and oppressive. The sheer horror of the game’s scenario really starts to sink in, and the fun times stop for a few minutes in sobering moments of humanity and despair. It seems like the game is building up a rather average story where a scorned father or detective is getting revenge on crime and evil and blah blah blah, but it swerves in a radically different direction towards the end. It all comes back down to who Jack is and what he’s doing here, and the game’s ending is filled to the brim with unexpected revelations that completely paint the game you just played in a coat of loathing and disgust. And it’s brilliant. 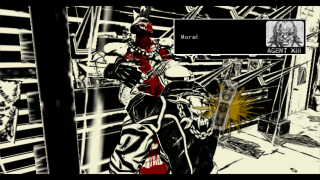 Where No More Heroes tries to convey themes with subtly disguised by spectacle and humor, MadWorld is loud and spiteful. Matsuno’s normal style completely disappears here as he just loses himself in how disgusted he is in the modern state of gaming and how it treats violence, undercutting every fun gore-fest by showing you the real horrific aftermath of that violence. The ending ends in a particularly tragic way, mixing in a bit of meta-narrative in the player’s role with just a simple quick time event, not much unlike the final battle with The Boss in Metal Gear Solid 3. This story is actually too good for this game, elevating it into something truly special.

MadWorld is just shockingly angry, and in the best way. The entire game is like a series of New Year’s parties and the morning afters, leaving you with smiles and wiping them away just as quick. Games about violence in games are nothing new, but I have rarely seen them so spot on and direct like MadWorld. Honestly, the message would have probably been clearer if the game was released for a system that actually had all those violent games it’s so pissed off about. MadWorld is both a middle of the road action game from one of the best studios for action games, and a damning critique of modern gaming trends. Somehow, those two things conflicting with each other just makes the game better. 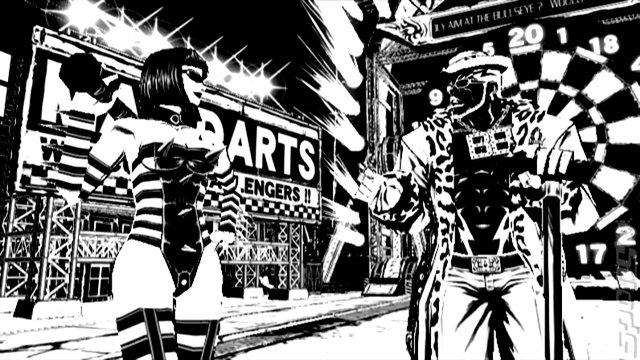 If you need further proof that Matsuno is the heart and soul here, just go check out the story in Anarchy Reigns, a reboot made without him. That game is like the Psycho-Pass season two of this series. It’s entertaining in many respects, but it’s hard to believe it ever had anything to do with the original.