E.V.O.: Search for Eden is a significantly different take on the same evolutionary concept and mechanics of The Shinkaron. Abandoning the often monotonous turn-based combat of its predecessor, Search for Eden is a side-scrolling platformer, so you bite, jump, and dodge enemies in real time. Instead of distributing points into stats to evolve into discrete, pre-defined creatures, here you use Evo Points to upgrade your individual body parts, like your jaws, limbs, tail, and dorsal fin. Search for Eden also attempts to address the anticlimactic progression of the previous game’s story, adding extremely tough boss fights throughout each chapter. 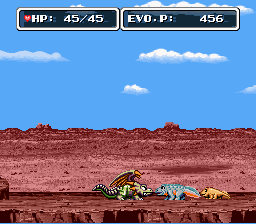 The ability to customize your creature’s individual body parts is the game’s main draw. At various points in the game, you begin as the weakest possible fish, amphibian, dinosaur, or mammal, unable to pose much of a threat to anything beyond shellfish, herbivores, and rats. But as soon as you can eat enough of these weak enemies to earn the EVO Points necessary to buy your first body upgrade, you’ll feel a dramatic difference in your capabilities, in terms of damage, handling, or survivability. Every upgrade feels meaningful as a result, and it’s more satisfying to improve in this way than to simply allocate points toward your various stats, as in The Shinkaron. 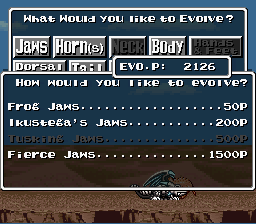 Your evolutionary choices are generally determined by which of the five eras you’re living in – Age of Fish, Early Creatures of Land, Age of Dinosaurs, Ice Age, and Early Man. Your animal type is predetermined in the first three eras – fish, amphibians, and dinosaurs, respectively. But at various points in the final two eras, some hidden away in side quests, you have the choice to evolve into a new kind of creature, switching permanently to its evolutionary tree. You can complete the game as a reptile, bird, mammal, or human.

As satisfying as this customization mechanic can be, numerous issues mar its execution. The game’s controls often feel clunky; you tap a direction twice to charge irreversibly forward until you change directions, jump, or hit something, which makes it difficult to be both fast and flexible in combat. Hit detection can be pretty inexplicable; the best place to bite a stegosaurus, it turns out, is a spot floating in space above their tail. The game’s combo-friendly stun system is a double-edged sword; you can take out several bosses by locking them into a stun with repeated bites, but if you fight multiple enemies at once, you’ll find yourself juggled between them and dead very quickly. You spend a lot of time being stunned, anyway, from getting hit to merely landing a jump, which makes movement feel rather unresponsive. 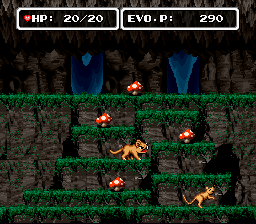 Whereas the previous game felt universally hostile, with everything from the rats to the sharks engaging you in combat as soon as they bumped into you, Search for Eden is full of prey. Herbivore dinosaurs run in terror as you approach, and only attack if they have no options left. You can attack many of the NPCs in the game without reprimand. As a result, many of the levels tend to feel like grazing fields – and they’re often just as flat – where you can devour everything in order to evolve enough to face the real threat of the bosses. The bland levels tend to improve in the game’s final two chapters, with some fairly difficult fields of stegosaurus and a large number of modern animals. But at this point in the game, you have more than enough EVO Points to upgrade everything you want, so there’s little incentive to take on these more challenging enemies.

The boss battles in Search for Eden are frequent, long, and deadly. The bosses’ damage output is extremely high relative both to what normal enemies can dish out and to what you can yourself, and the aforementioned frequency of stunning attacks grants some bosses several hits on you if they manage to land just one. Without resorting to attempting to bite them into an infinite combo yourself, these fights require a lot of patience and absolute vigilance. One trick at your disposal is that by evolving, you restore your HP and horn durability; one way to make it through some boss fights is to repeatedly purchase a cheap upgrade (like alternating between short and long necks) whenever you are close to death. Since dying costs about half of your EVO Points, as does this HP-restoring trick, some bosses simply require a lot of grinding to defeat. 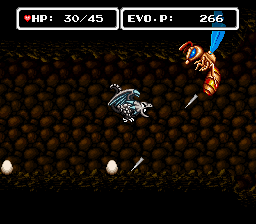 As expected for the move from a text-heavy RPG to a platformer, the storytelling is a little more sparse in this game. This time, Gaia introduces herself from the beginning, asking you to complete a trial called “survival of the fittest” in each era of the Earth’s history, with the ultimate goal of gaining entrance to Eden, where you will be her eternal companion. Along the way, you meet various animals, sometimes benevolent and asking for your help, but more often trying to wipe you off the face of the planet to guarantee their own race’s supremacy or mere survival. Outside of brief conversations with Gaia between eras, the story is told mostly in-engine; gone are the often gorgeous landscape shots in the previous game’s cutscenes. However, the death of the dinosaurs is told well through a dramatic cutscene, ending on a heartbreaking shot of a mother protecting her child. 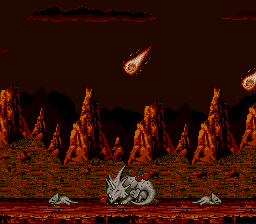 Death of the dinosaurs

The scope of Search for Eden is a bit smaller than the previous game – this game’s final chapter ends with a collection of existing modern-day creatures, joined by cavemen, sentient fish armed with lasers, and slime-lobbing ninja dinosaurs. Yet this direction is far more conservative than the smorgasbord of terrifying lizardmen, dwarves, ogres, and Doctor Manhattans roaming the earth of the previous game’s penultimate chapter. So the concept is a bit more unified and grounded in reality, if a bit less fun. Still, there are some mysterious crystals scattered throughout the world which advance creatures’ evolution, and in a hidden area you come across a colony of Martians trying to stop their originally benevolent experiment of bringing these evolution-speeding crystals to Earth. The fantastical elements are there, but just more hidden.

The game’s music is hilariously uneven, all its good parts having been taken from The Shinka Ron‘s soundtrack. The game’s opening chapter has a particularly spectacular ocean theme, arranged from The Shinka Ron‘s first overworld theme. The rest of the ocean’s music also comes from the previous game, from the ominous cave theme to a strangely jaunty theme to a land of sharks. But it’s all downhill as soon as you wash ashore. Your life on land, that is, roughly 80% of the game, is mostly accompanied by a thirty-second loop of some two-chord blues, admittedly with a few instrumental variations at times. The game’s final dungeon and final boss themes stand out from the surrounding auditory mess, though (or since) they’re lifted from the previous game’s Lucifer theme. Despite its low quality, the Search for Eden soundtrack was featured in the second annual Game Music Concert in Tokyo in 1992. 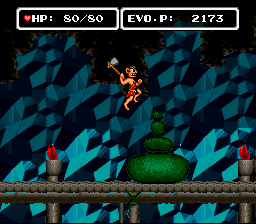 E.V.O.: Search for Eden is a curious, flawed game, and a bit of an evolutionary dead end. It hasn’t aged particularly well, and it requires a lot of patience to make progress in, but the feeling of customization and progression it offers is deeply satisfying and fun to experiment with.

Links:
RPGClassics’ E.V.O. Shrine – A site with plenty of info on the game’s evolutions and bosses.
Game Music Concert 2: E.V.O.: Search for Eden – Sorrow – Orchestrated version of a composition featured in both games.