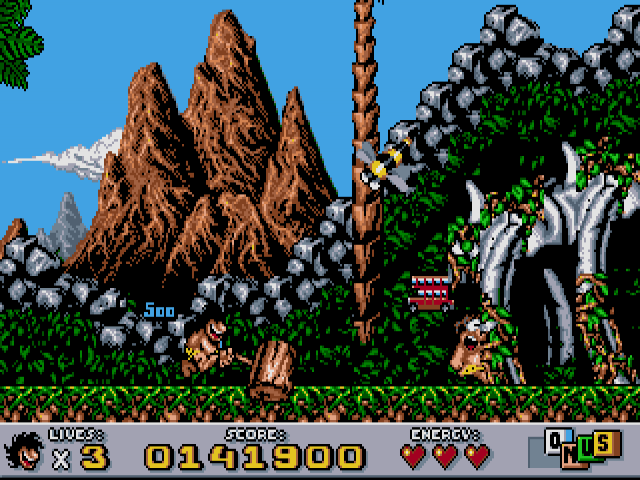 Prehistorik came back two years later, as hungry as ever, in this improved sequel that owes much to collect-a-thon console platforming games of the time. It looks similar to the precursor, but this time the levels are much more extensive, full of secret passages and tons of bonuses either in plain sight or stashed in hidden areas that can be found after hitting with the club random parts of the scenery. There’s actual scrolling, both horizontal and vertical since the levels are so huge, and there are both checkpoints and passwords, because now beating all of it in one setting is a quite hard task. However, Titus resorted again to an annoying quirk seen in some of their earlier games: the passwords aren’t simply given after beating a level, but must be found inside the levels themselves, and given how big some of them are, missing them becomes both easy and infuriating.

In general the game is harder than before, not only because of the bigger levels that make finding the exit harder, but also for the abundance of spikes and traps, enemies popping out of nowhere and bosses whose patterns and attacks aren’t as rudimentary as in the prequel. There are two difficulty levels, “Beginner” and “Expert”, but the former prevents you to enter the final stage.

The graphics are fairly similar to the earlier game, with several recycled sprites and environments; some of them stand out though, like the forest with the autumn-colored leaves, the crystal caves or the final stage. The latter, for some reason, looks like a medieval castle full of demon statues, spikes and a weird minotaur sculpture that is also the final enemy. Prehistorik lost his beard (so, either this is a prequel, or he discovered shaving) but looks crazier than before, with a wild mane of hair and his tongue sticking out. The BGM are better this time, but the newly-implemented sound effects are very annoying, especially the strange slurping noise he makes after eating foods or the grunt when he jumps on enemies’ heads.

Despite food being the game’s main theme, there’s no hunger bar anymore and our hero no longer eats enemies, they just fall off the screen after having been clubbed (or hit with the other available weapons). This time though he can jump on their heads to use them as trampolines, to reach new zones or out of the way bonuses. Also there’s this quirk where, if you manage to defeat an enemy that just hit you, it will drop bones that if collected will give you back the energy point lost. This mechanic will be used in all subsequent games.

Prehistorik 2 has an arcade quality, in that is much more score-oriented than the first chapter: bouncing on enemies’ heads a few times in succession increases their points value after beating them, passing a level without dying doubles the point value of the bonuses taken during the end-of-level tally, there are bonus stages full of stuff to pick up, and there are scattered letters that form the word BONUS which, if completed, instantly makes a fridge (!) appear, that is worth 100k points. There are also giant versions of some food bonuses hidden here and there, reminiscent of the Bubble Bobble games; the bonuses themselves seem to be based on those from these games, in that they’re not just food items but every kind of random things, including toys, tools and playing cards. 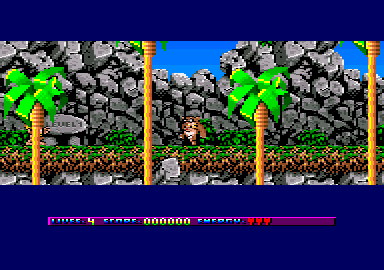 This time the game was only ported on Amstrad, in a decent enough port, given the computer’s capabilities, that however has only one BGM and suffers from the usual slowdown when there’s too much stuff on screen. Still, it’s one of the few games on the system enhanced to have full parallax scrolling.