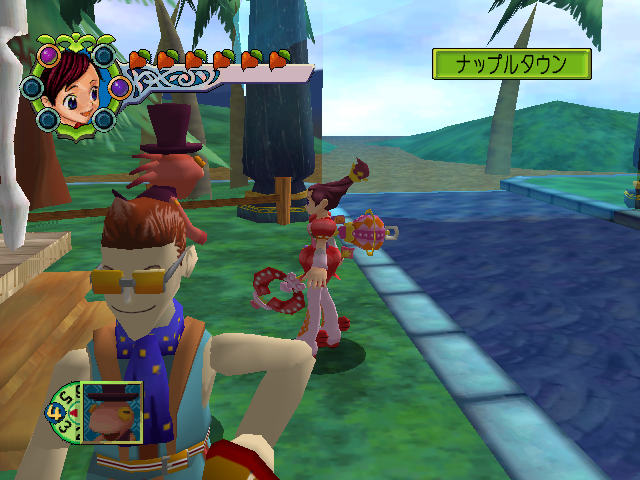 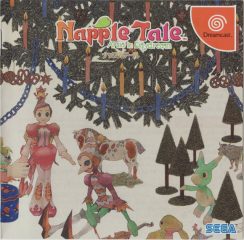 At first glance, Napple Tale: Arsia in Daydream looks like a historical anomaly. In a time when Sega was flexing their creative muscle with games like Jet Set Radio and Rez, a straightforward platformer like this appears unambitious by comparison. Indeed, the one aspect the game is most remembered for is being developed by an all women creative staff. Yet there’s far more to Napple Tale than either the circumstances of its creation or the conventions it uses would ever reveal. On the one hand, you have an emotional storybook journey about a young girl coming back to life. Looking at the game more broadly, though, exposes a game that’s eager to celebrate life; one that not only sees life as one big performance, but knows how to deploy video game conventions in service of that idea. Hence its penchant for theatrics and fairy tales; its poetic ardor for the natural world; and its peculiar approach to emotional resolution.

To offer a basic summary of the game, Napple Tale presents itself as a platformer with light roleplaying elements, released midway through the Dreamcast’s short life cycle, and only released in Japan. On their own, none of these aspects present that many surprises. Putting aside minor inflections like the carefree way the heroine floats through the air or how she playfully bats enemies aside like tennis balls, the game plays much like any other contemporary 2.5D platformer. The only notable addition Napple Tale makes (even if its impact on the game is relatively minor) comes in the form of the Paffet system. By defeating enemies or poking around a given level long enough, you collect random objects like a model house or a guitar or a tornado. The objects themselves aren’t of much importance; all you can really do with them is extract resources by examining them in 3D space (like how you examine items in Resident Evil games). But with those resources, you can create all manner of things: either furniture/fixtures to deliver to other townspeople, or Paffets, little creatures who aid you during your journey. Some function as makeshift platforms; others offer new offensive and defensive capabilities; and one early Paffet exists only to give you a round of applause. This doesn’t offer any immediate benefits, but it does make your journey through the game a little more festive.

Yet for as average as much of this sounds, it’s not until you consider the game’s narrative that you see the magic Napple Tale can work with these tools. The story reads like a fairy tale from the pages of Hans Christian Andersen: a young girl by the name of Poach Arsia wanders away from her friends during the summer festival, only to find herself mysteriously whisked away to a world between life and death. Not only has this world (Napple World) been thrown into disarray, but the only means Poach has of returning to her world have been scattered to who knows where. Her task, then, is to restore the proper flow of time, retrieve her missing petals, and return to the world of the living. It’s a story filled to the brim with characters, each one of which could be relevant at any given time, but to summarize the principal actors: 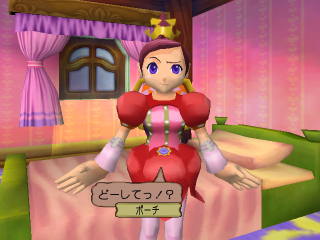 The adolescent heroine of Napple Tale. She’s a consistently heroic character, displaying the requisite traits like determination and a drive to action, but she can also be fairly childish at times. Poach often finds herself at a loss to understand the many nuances of Napple World, much to her frustration. 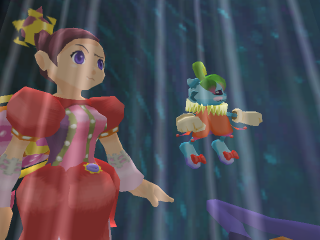 Poach’s soul guide through Napple World. Strennup serves as a source of both exposition and comic relief. The guy takes his job seriously, but his inexperience ensures a humorous mistake or two every now and then. 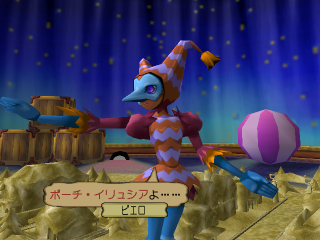 Personality-wise, The Jester is exactly the kind of person you’d expect him to be: the coy, playful figure who’s always willing to have fun. He can even be a little flirtatious every now and again. However, it’s revealed over the course of the game that he knows more about the world (and the people in it) than he lets on. 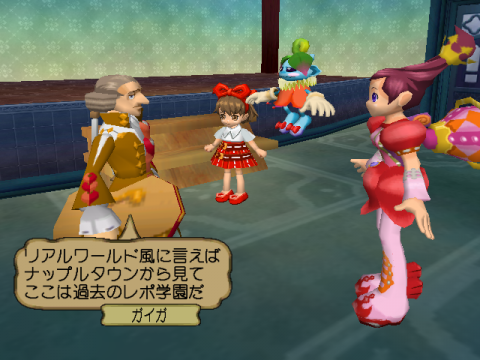 The first thing you’re likely to notice about Napple Tale is how fascinated it is with capturing feelings of childhood innocence and joyfulness. This is obvious enough in the many fairy tale references sprinkled throughout Napple World; to cite just a few examples, Napple Tale draws from works like Alice in Wonderland, The Wind in the Willows, One Thousand and One Nights, and The Snow Queen. (In fact, you could arguably describe Napple Tale as a reimagining of Alice in Wonderland.) Yet the game carries things further than that. The fairy tale motifs aren’t limited to surface references, but are something the game pursues with clarity and purpose.

Take the language, for example. On occasion, it becomes more flowery, delicate, and melodic than usual, delivered with a cadence like it’s being read directly out of a storybook. There’s a very palpable feeling of nostalgia and warmth communicated in these moments. It’s this warmth that acts as a unifying force for every facet of Napple Tale‘s design. The visual style at least partially reflects this. Being a 3D Dreamcast game, Napple Tale‘s visuals land somewhere between cartoony and claymation (the latter being something you rarely see games pursue). The music captures it even better. Yoko Kanno’s soundtrack can capture a variety of moods – from meditative to energetic to somewhat eerie – while fitting with the game’s playful attitude.

At this point, it might be best to clarify that the game’s playful energy isn’t blind and lacking in direction. In fact, Chime was smart enough to focus it through themes of temporality and psychological growth. Nowhere do those themes come across more clearly than in Napple Tale‘s levels. On the one hand, there’s their playful quality. Much like the game consciously invokes fairy tale motifs, the levels go out of their way to present themselves in a fun, circus-y sort of way. The time you spend here will be spent jumping through hoops, bouncing off trampolines, riding down ziplines, and smashing your way to whatever goal it is you have to achieve. However, the levels simultaneously serve another purpose: they also function as poems dedicated to the four seasons. Sleigh rides, summer festivals, the changing colors of the leaves, the first rain of summer, the melting snow that signals spring’s arrival – Napple Tale takes great delight in extolling these moments and many other likes them.

Napple Tale imbues its levels with a feeling of temporality. It opts to represent the seasons not through broad strokes, but with these very particular and very fleeting moments. This is because the game sees a lot of value in life’s fleeting nature. In fact, it’s that very nature that gives life its value, the game posits. As much as it wants to encourage Poach and the player to celebrate the seasons, Napple Tale recognizes how vital the movement of time is toward that end. It exposes people to a wide variety of life experiences, good and bad, and presents opportunities for growth through those experiences. That’s why Poach’s quest to return to the world of the living involves restoring the natural flow of time: because doing so helps her gain a greater appreciation for the transient nature of human existence. Conversely, it’s also why each of the game’s bosses are linked to stagnation and ruin: because they want to stop the clock to sate their own desires (eating leaves, eternal rain, etc.). 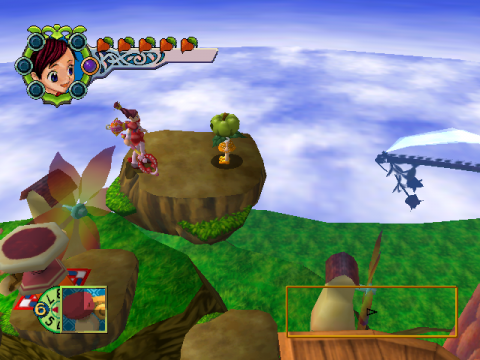 Within this context, it becomes easier to see how play grounds the game’s understanding of impermanence. Indeed, play, being an inherently temporary construct which is destroyed almost as soon as it’s created, is perfectly suited for this purpose. It wonderfully illustrates how a person can enjoy something temporary for its own sake, and how valuable living in the moment can be at times. In addition, Napple Tale‘s theatrical motifs help ground its ardor for the seasons in something material. By this point, it should be clear that the game doesn’t want you thinking of the seasons as some eternal idea that exists in our minds, separate from reality. Napple Tale doesn’t even think it’s possible to understand life divorced of its ephemerality. It wants you to approach its spaces as a lived experience; spaces that you can make your own after they’ve made a strong personal impression on you.

Again, the game’s playful attitude lends itself well toward this goal. You’re encouraged to view the world as one grand performance, your own movements unified with whatever natural forces present themselves on this particular stage. You may find the gust of spring wind propelling you into the air like a trapeze artist, or hopping across ponds formed by the first summer rain. They’re each minor moments, but that’s exactly the point. The game wants to foster a holistic celebration of all life’s moments, no matter how small they may be. It’s par for the course in a game that venerates something like strawberry juice.

One might also apply this holistic approach from a psychological standpoint. In fact, doing so reveals a unique empathetic quality built into the game. First up are the more conventional ideas of tightly knit communities facilitating emotional growth and resolution, perhaps the most obvious instance of a feminine sensibility in Napple Tale. Just as one can’t appreciate life’s moments in isolation, so too is it impossible to think of identity as being limited to just the self. It stretches beyond those boundaries to include the much wider community of people in a person’s life.

In fact, they’re what end up structuring the game. Although the game is effectively a straight line from beginning to end (with maybe a few side objectives complete here and there), simply completing the levels as they appear to you won’t advance the game very far. Progress is often a back and forth affair where Poach encounters a problem with one of Napple Town’s citizens (Alice’s fears falling sleeping, Geiger’s failings as a piano teacher, Cecil’s longing for the rich life, etc.), learns more about it in Napple Town proper, and then goes back to the level proper to help them overcome this issue for good. In other words, before she can become whole herself, Poach must first help those around her achieve the same thing. However, these episodes also serve as a sort of thematic inversion to the bosses: where the latter are tied to an outwardly destructive desire, the former are tied to an inwardly destructive fear/insecurity/failing/etc. In addition, while their pain may be rooted in the past, enough of it still lingers to visibly affect the characters in the present. They require a different approach. 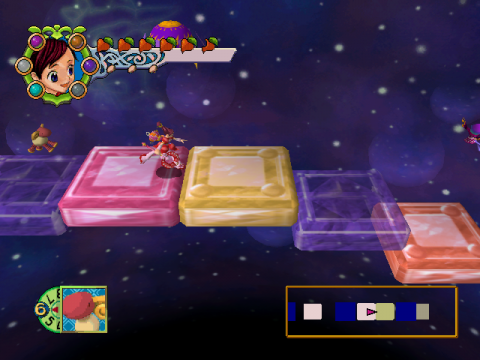 In other words, to play Napple Tale means learning to see the citizens of Napple World beyond whatever utility they may serve Poach in the present. They’re not just obstacles standing between her and psychological resolution, but independent agents worthy of serious consideration and individual treatment. True, some of that treatment involves some form of destruction (usually a boss battle), but it’s not destruction for destruction’s sake. It’s always aimed at whatever is causing this character pain, with the intention of seeing its resolution so these characters can stop being stuck in the past. In this way, Napple Tale is able to reconcile its celebration of life with life’s more negative moments.