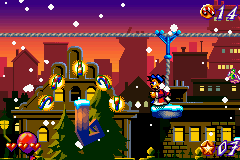 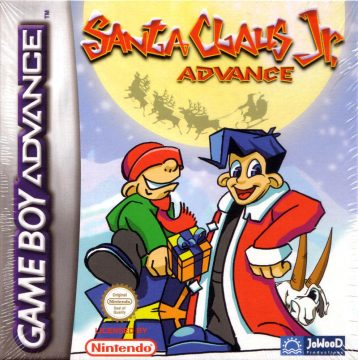 Released just over a year later for the still recent Game Boy Advance, Santa Claus Jr. Advance is quite different from the original in both gameplay and presentation. Striving to add more complexity to its gameplay, the end result is a decent platformer with plenty to dig into, though one that feels a bit more finicky in spots.

It’s Christmas Eve once more, when Santa Claus appears at Nick’s house to tell him that the witch, furious at not getting any presents, curses the toys and scares the children away. Santa can’t find all the kids in time while still delivering the presents to everyone else, so he asks Nick for help. Teaming up with the fairy Flöckchen, it’s up to Nick to find the children, deliver the presents to them, and defeat the witch in her dimensional castle. 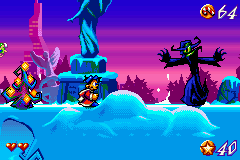 This time around, Nick has a few more abilities thanks to the magic powers of Flöckchen, such as double jumping, restoring one heart of health (activated by pressing L), and temporarily freezing all enemies (pressing L & R together). To use them, you’ll need to find magic stars that are obtained in boxes scattered around; which give you five or ten depending on their condition; and by defeating enemies; which gives you just one. These abilities aren’t needed to get through the game, but they can come in handy if you’re having trouble with a gap or need a helping hand with enemies.

There are also select power-ups that will activate for a short time, like being able to throw snowballs at enemies (pressing R), temporary invincibility and being carried through the air by Flöckchen. These all culminate in a more complex game than the original, and one that’s plenty faster too since Nick now runs instead of walking. That said, it’s still worth taking your time when going through stages because the game gets fairly challenging as it goes on.

It doesn’t happen as suddenly, since there’s many more levels to play through, but it does happen and arguably ends up being even tougher by the end. Unfortunately, that added complexity – with so much of it depending on limited resources – results in more finicky controls that make certain sections much harder. The double jump in particular is hard to figure out, which can be particularly frustrating when you need help getting to a certain ledge or want to correct a bad jump.

Other sections that make using the snowball or fairy flight mandatory also suffer the same problem, sometimes requiring good timing and reflexes that the game just can’t make good on. Most of the time, you only really need most of these to reach the secret areas where you’ll find the missing kids (handing them the presents instead of finding presents), and those are an optional goal that just unlock mini-games and a sound test when you beat the game. But it’s still frustrating that all these new skills often feel very limited or actively hamper your ability to play.

At the very least, Advance makes an enormous improvement on its predecessor by featuring battery-backed saves instead of passwords. You’re given three save slots, and the game saves after beating a level, so there’s no worry of having to replay earlier stages. You even have unlimited continues, meaning you can jump right back in after losing all your lives. The only cost to continuing is that you lose all your magic stars, but they can be found again easily enough.

There are two difficulty options, but these only seem to impact the number of enemies found throughout instead of deciding how much health you have. On that note, the game still doesn’t restore your health between stages and health pickups are practically gone, making that heart restore power something of a crutch. It’s nice giving the ability to recover in the player’s hands, but it often feels like a cheap way to make up for tricky, sometimes irritating sections.

It’s a considerably longer game than the original, with 36 stages compared to the latter’s 21, but it overall feels more repetitive due to levels retaining a motif or theme for a good while more. These can sometimes lend themselves to further exploring an idea, like the swinging platforms in the city outskirts becoming more challenging or hitching a train ride while ducking and jumping over obstacles. However, the pacing seen in the first game isn’t quite there, and most of the gimmicks end up either overstaying their welcome or being run through very quickly. 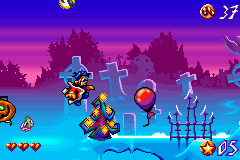 In terms of graphics, there’s a shift towards a more angular art style, with chunkier characters and blocky mountains in the distance. Some enemies look a bit weird like the big Yeti, but the rest are quite expressively animated. However, the visual theming of the game holds it back, sticking to the same backdrops for at least three levels (though the color usage is quite nice. Considering the game first takes place in the mountains as it shifts from midday to evening, it results in a good few stages stuck out in the same snowy backdrop for a bit too long. While the progression from the boy’s home to the witch’s castle still exists, it’s not as gradual nor compelling.

The music also features a notable change in sound. Credited to Shin’en Multimedia (but most likely done by its lead in-house composer Manfred Linzner), the soundtrack focuses entirely on samples to create a distinct soundscape that’s more focused on atmosphere than melodies. While this can sometimes result in tedious tracks, it often manages to nail a greater variety of style and mood while retaining that slow shift towards spookiness.

It’s admirable how much Advance seeks to create its own identity, almost acting as a complete do-over of the original concept, but the end result is a bit too uneven compared to the first to consider it as an improvement. Both games exist as alternate takes on the same idea, so which one you prefer will depend on whether you’re in the mood for a brisk but basic romp or a more complex but less dependable affair.

An interview on German website Planet Game Boy with project manager Pete Walentin prior to the game’s release: https://planetgameboy.de/artikel/santa.html