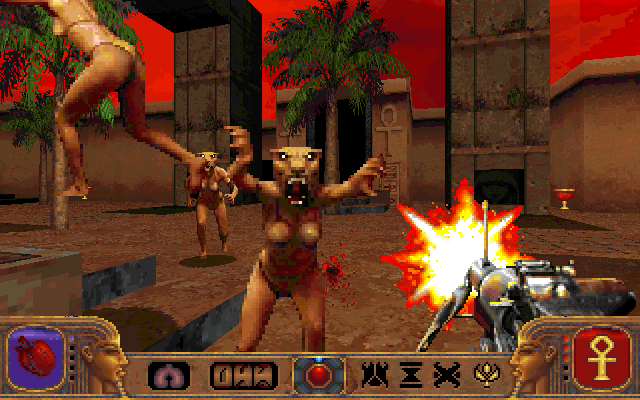 The mid-90s saw many first-person shooters released either trying to emulate or elaborate upon the success of id Software’s DOOM and Wolfenstein 3D, with some of the more memorable examples being created with Ken Silverman’s Build engine (Duke Nukem 3D, Blood, and Shadow Warrior). Among these games is PowerSlave, which was the first original title developed by Lobotomy Software: a team made up of former Nintendo of America and Manley & Associates employees. It was planned to be published by 3D Realms as Ruins: Return of the Gods, until budding publisher Playmates Interactive got the rights to it, necessitating a name-change possibly inspired by the Iron Maiden album Powerslave and a port to the PlayStation and Saturn. Although the PC version of PowerSlave is the original game (despite releasing AFTER the console port), it often gets ignored for that port in most discussions. That’s likely because while it’s a perfectly fine shooter of the era, it isn’t particularly noteworthy save for an extremely glaring flaw.

The Egyptian city of Karnak is under attack by supernatural forces commanded by something called the Kilmaat, and a crack team of special soldiers have been sent to deal with it. However, nearly everyone is killed in a helicopter crash, leaving you as the only survivor. In your travels, you awaken the spirit of King Ramses (voiced by legendary trailer voiceover actor Don LaFontaine), whose body has been exhumed by the Kilmaat to resurrect him and use his powers to control the world. It’s now up to you to travel through the land surrounding Karnak and prevent the Kilmaat’s machinations. 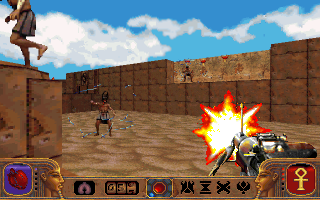 The gameplay is pretty standard for the time: your goal is to reach the end of the level by navigating large stages, finding keys to open up new areas, and shooting everything in your path. You have a variety of weapons with different ranges and levels of damage that you find as you progress through the game, along with a host of power-ups that can be found in secret areas such as invincibility, stronger firepower, and a full health restore.

But instead of using power-ups when you touch them, they instead become a part of your inventory that you can activate whenever you like. However, you can only use them once, and you’ll need a pretty stocked magic meter – which is filled by picking up orbs left behind by killed enemies. Letting you activate the power-ups lends an extra level of strategy to the game, as you now have to decide when’s the best time to use them. Killing enemies to fill your magic meter sounds like a good way of encouraging you to fight everyone you come across, but it doesn’t really work since your meter is frequently full when you don’t really need it. It’s especially annoying when ammo pickups are much scarcer, often forcing you to either backtrack or attack everything with a machete until you find a small clip. 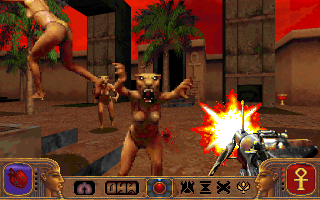 Perhaps the game’s only big deviation from its contemporaries is that it features a checkpoint and lives system. Located at certain points in the level are golden scarabs, which you’ll return to upon dying, but you can only do so a certain number of times – run out of lives and you’ll have to start from the beginning. You start with three lives, but can collect more by finding floating Egyptian men hidden in secret areas (yes, seriously). It’s a cool idea that’s forgiving towards players who forget to save frequently, and dying is usually fine since enemies stay dead and items collected. However, that last point is a big problem in sections where you’ll need ammo or magic in order to progress, which can be severe enough to force you to completely restart the level.

This is especially a glaring oversight since levels are quite big. Even from the beginning, stages can take roughly 10-20 minutes to beat on your first go, what with solving puzzles, finding keys and remembering where to use them, and still trying to stay alive through the many combat encounters and deadly traps. It doesn’t help that the level design makes navigation difficult, due to a lack of memorable locations, repetitive colors and textures, and very flat geometry (which is due to the game being made with an earlier version of the Build engine, where slopes hadn’t yet been implemented). 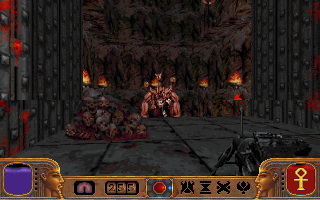 Unfortunately, what really exacerbates these issues is that you can’t save at any point during the game. Although it autosaves between stages, what this means is that you have to beat levels in one go. And no, loading the game after you’ve reached a checkpoint doesn’t start you from that checkpoint; you’ll start from the beginning every time. Considering how big these levels are, it’s frankly insane that you can’t save anywhere in case you’re caught out by one of the game’s many cheap, sometimes unavoidably fatal traps, or if you even want to just take a break. It makes playing through stages feel like a marathon, with the constant reminder that if you stop playing before you reach the end, you have no choice but to do it all over again. Why this decision was made is a mystery, considering plenty of shooters from the day let you save anywhere. It could be argued that it was done to stop people from save scumming, particularly when you take the checkpoint and lives system into account, but when this alternative screws over everyone regardless of whether they abuse the save system or not, that doesn’t really matter.

It’s such a shame considering PowerSlave is otherwise a pretty good game. If you’re fond of the 90s FPS formula of navigating levels and solving puzzles as you’re fighting enemies, you’ll get plenty of that here. The varied enemy types and attack patterns encourage you to think on your feet when dealing with different combinations, and your weapons give you plenty of options to fight back. That said, some of the enemy encounters can be irritating: the randomly vanishing Bastets force you to wait around for them to come back, and the underwater piranhas are a pain to hit with your machete thanks to very spotty collision detection. 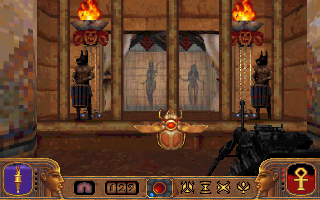 The controls are also a little weird in spots. You can’t turn and strafe at the same time, which gives combat an awkward stop-start feel. There are dedicated strafe buttons (though they’re not mentioned in the manual), but they move at a ridiculously slow speed that they’re not worth using. You can’t toggle a button to autorun, meaning you have to hold the Shift key if you’re planning on running around levels. This also extends to your control options, though this is more of an issue for players used to modern PC conveniences: you can’t remap any of the controls, and there isn’t any dedicated support for either standard mouse-and-keyboard set-ups or game controllers.

But other than that, it’s a perfectly fine game for what it sets out to do – for good and ill, sadly. Nothing about PowerSlave really stands out from the rest, be it mechanically or in execution. The combat is serviceable but lacks any real punch, the level design is competent but uninspired outside of the Ancient Egypt aesthetic, and you’re not doing anything that different from any other mid-90s FPS inspired by DOOM.

It also lacks various little features often seen elsewhere that would bolster its accessibility and replay value. You only get one difficulty setting, which can make the game in its current state potentially too hard for those who want to focus on exploring the levels. There isn’t a level tally screen full of various stats when you reach the end of a stage, which would normally encourage players to retry the level to beat the fastest time or find all the secrets. There aren’t even any secret levels to find: when you’ve played through PowerSlave once, you’ve seen it all. 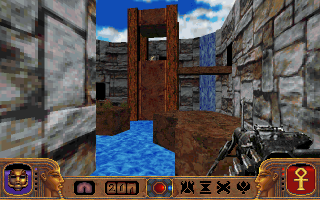 This mostly applies to the presentation as well. The game runs at a smooth framerate, enemies have nice big sprites, and you don’t often get shooters rocking the Ancient Egypt look. However, the environments suffer from drab, repetitive colors that make most areas blur together too often. The Redbook audio soundtrack by Scott Branston offers a nicely arranged mix of rocking tunes and more ambient pieces, but they’re short enough that they easily become grating when you’re spending ages in a level. Perhaps the most charming part of the presentation is the main character, who belts out amusingly daft deep-voiced quips every now and again in the vein of other Build engine FPS heroes.

PowerSlave fell into obscurity after its release, further compounded by the lack of any ports for decades. Using DOSBox was the easiest way to emulate the game, albeit with patches like the EX/PS DeHacker patch to improve the experience through bug fixes and various enhancements like properly working strafing, autorunning, and mouselook.

However, it was finally made legally available again in late 2020 when Throwback Entertainment released it on Good Old Games and Steam as PowerSlave (DOS Classic Edition), in order to distinguish it from the console port. It’s the same game running through DOSBox, but features improvements from the rarer American edition such as faster strafing speed, and includes a working Redbook audio soundtrack, along with tweaks to DOSBox to match the game’s performance on older hardware.

The EX/PS DeHacker patch, along with details on what you can do (click on the green text with the V1.X number to download) – http://www.r-t-c-m.com/knowledge-base/downloads-rtcm/powerslave-patches/