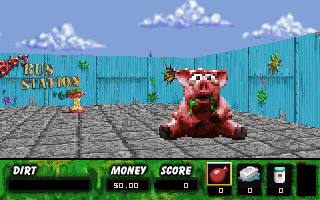 There just aren’t enough kid-friendly first-person shooters on the market. Certainly not enough non-militaristic shooters. This is probably because, whenever a development team comes along and tries to make one, the end result is crap nine times out of ten: for every Jumping Flash! or I. M. Meen, there’s a baker’s dozen H.U.R.L.s.

H.U.R.L. was developed by Deep River Publishing and released in 1995, later re-released as Slob Zone 3D, and in German as Blob Mudfight 3D. Since the original title is obnoxious to type, it will be referred to as Slob3D from now on.

To be fair, you could do a hell of a lot worse than Slob3D. Sonic’s Schoolhouse, RoboQuest, and the Mr. Pibb game are all abysmal affronts to children’s entertainment. Slob3D at least has personality: it delivers a fun Wolfenstein 3D adventure with claymation monsters and a positive cleanliness message for the filthy, back-talking sewer rats comprising its target demographic. 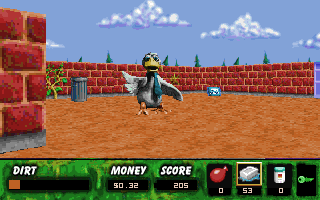 At a glance, Slob3D is great. Bob the Slob has stolen the world’s supply of underpants, and is holding it for ransom while his H.U.R.L. terrorist force dirties up the town with eggs, used kitty litter, and all sorts of vile trash. As an agent of S.U.D.Z., it’s your job to clean up the town, defeat Bob the Slob, and get the undies back. This much is explained to you (more or less) by Quigley, your cowardly boss who would totally help you out if he didn’t have to shampoo his kangaroo, and other excuses as he thinks of them.

Your quest for cleanliness generally follows the usual FPS formula of “find the colored keys to unlock the colored doors to reach the exit switch, shooting monsters along the way and trying not to get dead” – the word “dead” in this case means “hopelessly dirty”. From there things take a turn for the unusual: you progress by collecting trash items that Bob’s minions have polluted each level with – empty bottles, banana peels, newspapers, etc – and turning them into cold, hard cash; then turning that cash into objects of cleanliness for blasting the bad guys squeaky clean. Vending machines dispense water balloons, bars of soap, and sticks of deodorant, in that order of price and potency. Damage-wise, however, there is barely a difference among the three weapons, rendering the expensive 50-cent deodorant totally superfluous and useless. There’s really no point in buying anything but the soap, since it costs three cents a pop and drops enemies faster than the balloons. The game never gets more violent than pegging filthy alligators with a good soapy lathering until they become docile. 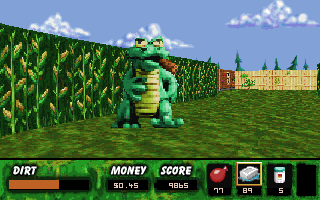 As previously stated, your life meter is actually a dirt meter that gauges how covered in filth you are. So each level has a plethora of methods for washing up: raincoats, umbrellas, and cleaning wipes will reduce your dirtiness when collected. Public showers will clean you slightly for a little cash (they’ll keep eating your money even if you aren’t dirty, though, so don’t spam the spacebar). Toilets and leaky fire hydrants will also give you a good wash when you use them, so memorize their locations.There are a few other interactive objects thrown in for no reason, like pay phones, intercoms, and drive-thru speakers that spout “funny” non-sequiturs, which only a three-year-old would laugh at. It’s a nice interactive touch, though.

Most of the levels are totally unique from one-another, with very few repeat environments: your quest takes you through a bus station, trailer park, sewer, fast food plaza, public school, farm, and finally Bob the Slob’s disco palace. They’re all distinct and memorable, and filled with quirky details – as short as the game is (only ten levels), you never find yourself getting bored. The music is forgettable, but appropriately goofy, and all of the monsters are brilliantly sculpted in clay, as adorable as they are disgusting. 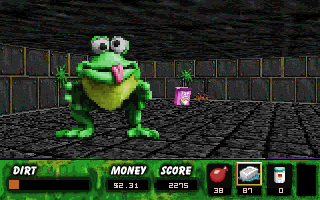 By all accounts, Slob3D should be a blast for any lover of old-school shooters. And it would be, if it wasn’t for one minor problem: the most basic gameplay mechanics are so crippled it renders Slob3D unplayable even to adults, nevermind children.

Slob3D either wasn’t playtested, or Deep River simply didn’t have the time or budget to iron out the engine bugs and refine the controls. You move too fast, and turn even faster, making the simple act of going through a door (or aligning yourself just right so you can even open it) a true odyssey of frustration. The same applies to any interactive object, including the vending machines. And this has nothing to do with the “old games run super fast on modern machines” issue, either – it’s that broken. 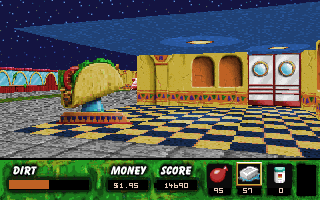 The attack key is not very responsive, and if you’re too close to an enemy, or even slightly moving, you can’t attack at all. Even when you do get a shot off, there’s a chance it’ll just pass right through your target anyway. Enemies do not take damage while in their “stun” state, so spamming them with soap just wastes ammo: you have to wait for them to stop flinching before firing again. Since you have to be standing still to fire, and since you can only hurt an enemy when it’s not flinching, combat is reduced to ro-sham-bo, with two combatants standing around, trading shots until one of them dies or runs away. You can’t strafe, either, but given the aforementioned restrictions, strafing wouldn’t help you anyway.

Trash items and enemy “corpses” block your shots, and their hitboxes are huge; you can shoot enemy projectiles out of the air, which at times is a pain; others, it’s a relief, especially when you can’t afford to take another hit (your movement is too crippled to dodge). Sometimes a defeated enemy remains solid, which spells doom if they were killed in a doorway, forever blocking your progress; and this is bound to happen sooner or later, since the agents of H.U.R.L. have more difficulty moving through open doors than you do! And when you load a level in progress, all the slain enemies are back, though they don’t move or attack and go down in a single hit. 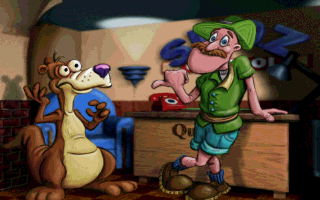 All of these issues work together to hinder or kill the player, or at least waste his hard-earned soap and leave him unable to defend himself later. It’s enough to make you H.U.R.L. your keyboard out the window.

It would be nice if some kind soul would reverse-engineer this game to fix the bugs and make it playable, because there really is a lot of potential here. Slob3D contains a visually unique world that would be otherwise fun to explore. But any game is hopelessly broken when the player’s single greatest adversary is a simple door. It was a solid effort, but Deep River should’ve licensed the much more refined Wolf3D engine.