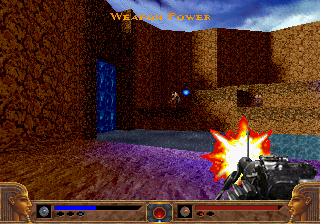 As part of the publishing agreement with Playmates Interactive, Lobotomy produced a console port of PowerSlave for the PlayStation and Saturn. However, it wasn’t possible to port the Build engine code over, so they had to remake the game completely. The end result wasn’t a straightforward albeit truncated conversion like the console ports for DOOM and its contemporaries, but an entirely new game that takes the original ideas and goes in a very different direction. So it’s worth examining this port as its own thing, especially since what it does is both fascinating and a massive improvement on the original.

The gameplay is largely the same, though various minor tweaks have been made to the controls. You move a lot faster and can turn while shooting, which improves combat greatly. However, the squirrely movement makes platforming sections tricky, since even the slightest push moves you further than expected and can possibly knock you off platforms. You can look up and down by holding the look button (albeit with inverted vertical controls only), but enemies can still be hit as long as you’re firing on the same X axis, and they even flash white when hit in a very helpful move. Unfortunately, smaller enemies like the scorpions and wasps are harder to hit, likely due to how often and haphazardly they move around. 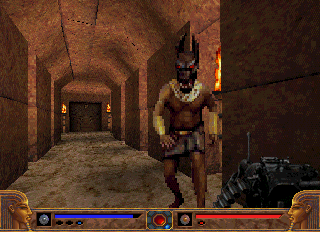 Spells have been discarded and you no longer have a magic meter, which effects what enemies leave behind. They now occasionally drop red orbs that restore your health and blue orbs that refill the ammo of whichever gun you have equipped (which can also be found in barrels, alongside other orbs that offer temporary power-ups like invincibility). This is a very clever change that simplifies the design while encouraging you to kill as many enemies as you can to recover your resources, and asks you to carefully consider which weapon you want to refill. That said, it’s irritating how you sometimes won’t find anything from barrels, which wastes your ammo if you’re shooting them – and attacking them with a machete is risky since barrels can suddenly explode.

However, the biggest change is in the game structure. Instead of a linear series of massive levels, the world is split into smaller locations that you can jump back and forth between. Areas are often inaccessible and can only be overcome by finding permanent upgrades such as a higher jump, the ability to breathe underwater, and more. This focus on exploration and backtracking essentially makes PowerSlave one of the earliest known examples of a first-person shooter using elements of the Metroidvania sub-genre, years before the Metroid Prime trilogy gained mainstream acclaim for it.

It’s a direction that works very well for the gameplay flow and level design, since it encourages you to revisit previous areas to either discover new stages or find optional items such as life-extending ankhs and pieces of a potentially important transmitter. Levels are smaller, but are more compact and therefore quicker to traverse: a tremendous boon for finding where you need to go next and for moving around in general. This is particularly helpful since you now restart levels when you die, which isn’t as bad when they can be beaten quickly. 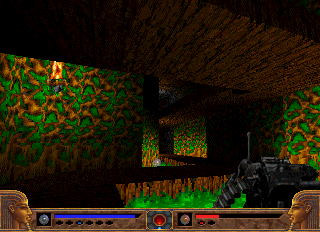 The geometry is much more complex, offering memorable locations within levels that help you remember where a certain power-up might be needed. Individual stages are very distinct, with each one featuring unique architecture, color schemes, and design sensibilities that makes exploring new areas exciting and spontaneous. Perhaps the only issue with this structure is that there’s only one route to take through the game. Though you can sequence break with the help of Quake-style grenade jumps that propel you through the air, you’re never offered more than one new level at a time, so your options when replaying the game are fairly limited.

In terms of combat, the enemy roster has changed too. A couple of new enemies are introduced, such as eagles that charge into you, while others like the wasps and the big bull-like creatures have either been resized or removed altogether. Even the rate they’re introduced into the game has slowed down considerably, with the Bastets and Magmantises being saved for much later on. This creates a more gradual difficulty curve that compliments the increased focus on exploration and makes combat more enjoyable. In general, the game’s difficulty is much fairer, with far fewer dead ends and mean-spirited death-traps. But they’re not removed entirely, and one level in particular suffers from an obnoxious, inescapable trap right at the end – made all the worse by being the only truly tedious level in the game to navigate. Quick hint: if you see the last key in front of two exits underwater, make sure to head into one of them as soon as you grab the key.

The most distinguishing thing about PowerSlave is its superb graphics, especially considering it was made primarily for the Saturn – a console notorious for being hard to program for and for its difficulty handling 3D games. Utilizing the Slave Driver engine designed by Ezra Dreisbach, the game renders wide open levels in full 3D and manages it without much issue. Though the framerate can dip when there’s a lot happening onscreen, it tends to keep a near-consistent 30fps throughout – making for a very playable game and one of the best running shooters on the Saturn. The only issue is the dark coloring and texturing for the level geometry. While this does help to establish a certain mood, it also makes darker stages like the cave and mine levels near impossible to navigate when the difference between two walls of varying distance is indistinguishable. 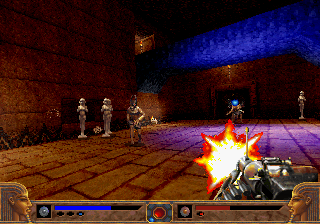 The music from the PC version is carried over, but its use is generally more effective due to smarter placement of tracks to fit specific moods. It also helps that the compact stage sizes prevent tracks from outstaying their welcome. The main character’s goofy quotes have been entirely scrubbed, which maintains the game’s more serious tone.

Since the Saturn was the lead platform, the PlayStation port received several changes due to its different architecture, both big and small. The autoaim doesn’t work as well, which makes hitting the smaller enemies more irritating. Moving around is less squirrely, so tight platforming is much easier to do. You even pick up ammo drops more frequently, ensuring you’re always stocked. However, the most noticeable edits have been made to the level geometry. Levels have been redesigned to various degrees to make for more enclosed areas, with some stages such as Amun Mines and the Cavern of Peril receiving entirely new layouts. This has been done to make sure the game runs as smoothly as possible, though the irony is that the framerate is a lot more inconsistent – it can reach 60fps, but it can also go down to 20fps, and usually wavers in between for the majority of the game. 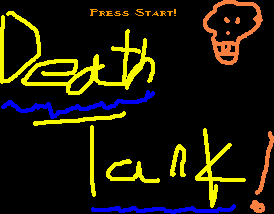 Despite that, the fact that you’re playing through a rearranged campaign should make this port worth experiencing for fans, though they’ll have to live with the loss of grenade jumping, along with the secret minigame Death Tank. As well as sequence breaking, grenade jumping can be used to launch yourself into some pretty wild areas, where you’d find Team Dolls emblazoned with the faces of Lobotomy Software. Collecting every doll unlocks Death Tank, where you and five other players fire missiles at each other much like Scorched Earth, though in real-time. This is missing from the European version of PowerSlave (known as Exhumed), since that came out before Death Tank was programmed, and from the PlayStation port altogether. While you can still collect Team Dolls, they simply unlock ridiculous powers that only serve to find more dolls. 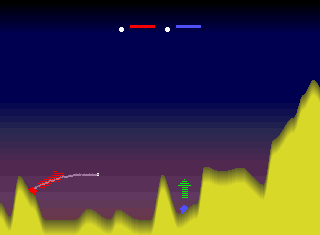 In 2015, Samuel “Kaiser” Villarreal of Night Dive Studios released an unofficial remake for PC called PowerSlave EX. This remade the PlayStation version from the ground up with Kaiser’s KEX Engine (which has been used to power Night Dive’s ports of classic games such as Turok, DOOM 64 and Quake), with the usual features such as mouse/keyboard controls, mouselook, adjustable resolutions, and more. It was temporarily available on Kaiser’s blog, but was removed sometime after – presumably due to legal troubles with whoever owns the rights to PowerSlave.
Kaiser did release the source code for people to compile and edit for their own purposes, but this is no longer necessary with the release of PowerSlave Exhumed on every major platform in 2022. This port features the same improvements as EX, but fashions itself as a hybrid of the Saturn and PlayStation versions: utilizing the Saturn as a base while inserting additions in the PlayStation port such as the blue scorpions, exclusive sections in levels, and the orbs falling to the ground.
It also includes optional checkpoints scattered throughout the levels, ensuring you no longer have to beat them in one go. The addition of freelook while moving around helps to make exploration and platforming more comfortable for the player. These additions combine to make PowerSlave a more manageable experience, though the original degree of challenge with enemy encounters and level design is still there. You can even kick the game up to brand new higher difficulties if you’d like, and there’s a few new Team Dolls included to find. Sadly, there’s no Death Tank in this version, but this is otherwise the best version of PowerSlave to check out.
PowerSlave wasn’t initially successful, but it soon gained a significant cult following in Europe – largely thanks to the efforts of the Sega Saturn Magazine and its editor Richard Leadbetter. This following enabled Lobotomy to earn its next two projects: creating Saturn ports for Duke Nukem 3D and Quake using the Slave Driver engine. They were more accurate conversions than PowerSlave‘s drastic reinterpretation, but were of similarly high quality in the technical department. There were even plans to develop a sequel to PowerSlave, which would have been very different.
It was a third-person action game made in an entirely new engine, where you would try to rescue the sun god Ra and return light to the world by gaining powers from other Egyptian gods. The focus on exploration and interconnected levels would be further expanded by seamless transitioning between areas, the inclusion of optional abilities and boss battles, and even the ability to shift between the living world and the Afterlife similar to Legacy of Kain: Soul Reaver. However, the game was cancelled when Lobotomy closed in 1998 due to financial problems, leaving only an interview with Gamefan and screenshots of models and concept art to hint at what might have been.Special thanks to dsparil for helping me get acclimated to the controls and mentioning a couple of things, and Kurt Kalata for supplying the Death Tank screenshots.

An interview with Ezra Dreisbach on working with the Sega Saturn –  http://www.segasaturn.co.uk/beta/news/ezra-dreisbach-interview/

Various links for a patch that fixes an issue with the mouse for PowerSlave EX in Windows 10 systems – https://www.reddit.com/r/pcgaming/comments/a3qngq/powerslave_ex_mouse_fix/

A Gamefan interview discussing plans and art for the cancelled PowerSlave 2 – https://archive.org/stream/GamefanVolume5Issue10October1997#page/n107/mode/2up

PowerSlave EX screenshots were obtained from Kaiser’s blog for the game: https://powerslaveex.wordpress.com/