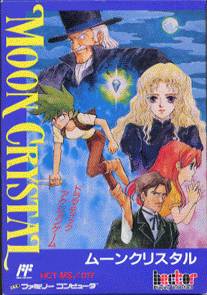 When it was released back in 1989, the animation in Prince of Persia was a revelation. In an age where having more than three frames of running movement was considered an excessive waste of memory, here we had a player character who could walk, run, jump, and attack with incredible fluidity. Of course, huge amounts of frustration set in when you actually tried to control the character, and more often got yourself unceremoniously killed. 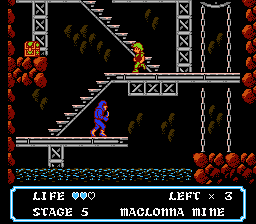 Moon Crystal, by a fairly low profile developer called Hector and published only in Japan for the Famicom, feels like it was inspired by Prince of Persia, but with tighter controls and put into the framework of a traditional console action platformer. The green haired hero, Ricky, isn’t quite as detailed as the Prince, but his animations are also far smoother than practically any game on the system. Most games used a simple frame for jumping and ducking – Moon Crystal uses several. He skids slightly when he changes direction. He can also grab onto any platform – necessary for certain sections, naturally, but also a good tool to save yourself from misguided jumps – and pull himself up. It even generously gives you the ability to double jump upon obtaining a certain power-up, quite a rare function in an 8-bit game. 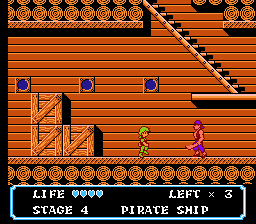 In particular, its visuals hold up beyond the character animation, occasionally using multi-plane scrolling. The stages, particularly the European village, the count’s castle, and the somewhat anachronistic robotics in the final stage, seem to channel Ghibli movies. Hayao Miyazaki is reportedly a huge hater of video games – after some rather poor Nausicaä games for Japanese PCs, it was probably for the best, seeing how it’s probably spared us countless unnecessary Totoro games – so about the best anyone could any hope for are games inspired by his visionary animation. 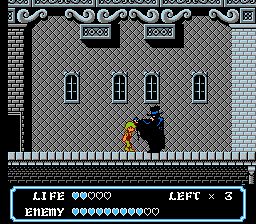 Like Castle in the Sky, Moon Crystal revolves around a shining pendant with mysterious powers. You control Ricky Slater, whose father, a great scientist, has been kidnapped by the evil Count Crimson. By using the power of the Moon Crystal, the Count seeks to use a device called the Unisystem to turn the dead into living, and thus rule the world. Only Ricky, with the help of a mysterious girl named Rosina, can save his family and stop the evil Count. The story is told through Ninja Gaiden-esque cutscenes, and while not quite as dramatic, they’re still pretty effective, and there are a few surprise twists that make it more interesting than your standard NES game. A translation patch also exists to play the game in English. 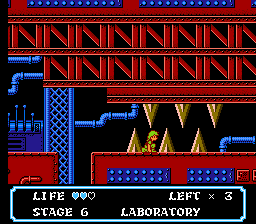 While it’s all quite impressive, the extra animation leads to some control issues, initially subtle, but grow more infuriating as the game progresses. Ricky seems a bit unresponsive compared to other games, often slow to duck, and you’d never know you’d miss the ability to turn around while crouching until you play a game where you can’t. Ricky is also quite poorly equipped, wielding an extremely small dagger. A power-up extends it a bit further, but that’s all you’ll ever get. 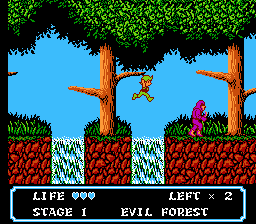 It’s rarely a problem during the actual stages, where its short length requires some ingenuity in dealing with the surprisingly smart foes, but it completely ruins the boss battles. Since you must engage in close quarters, there’s never any room to dodge attacks. Technically, you can strike more powerful blows by hitting the enemy in its head, but getting it to work is pretty haphazard. Most boss battles need to be won by entering the arena with max health, getting close, and simply stabbing away, hoping you outlast the enemy. 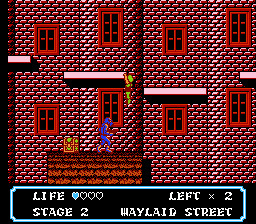 It’s issues like these that place Moon Crystal on the level with other second tier NES/Famicom titles like Conquest of the Crystal Palace or Shadow of the Ninja – quite great, but not outstanding. It’s really nothing to be ashamed of, though, because it’s still plenty worthwhile. 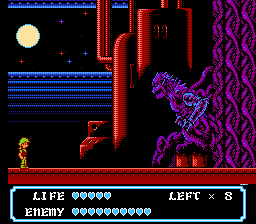 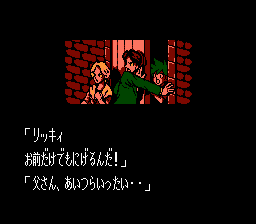 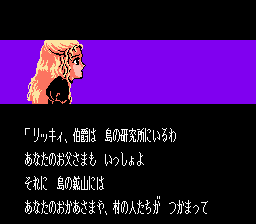 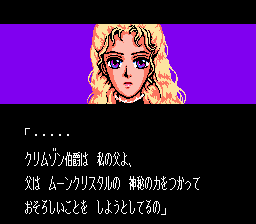 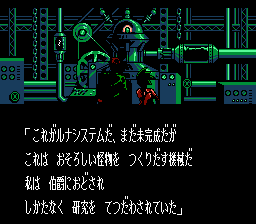 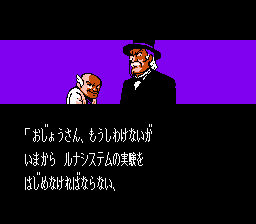 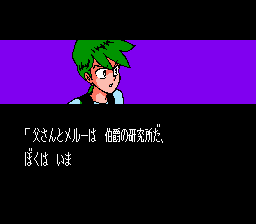 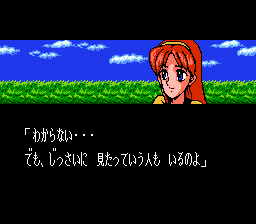 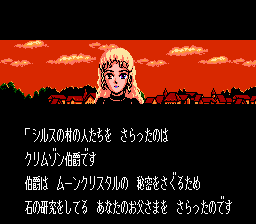