While the NES was on its way out in 1991 thanks to the advent of the SNES, games were still officially made for the system up to 1994. Quite a few of these twilight titles demonstrated the fullest potential of the system’s technological limits, though it is a shame that not too many of them were recognized. Little Samson (Seirei Densetsu Lickle, or “Holy Bell Legend Lickle” in Japan )falls into this unfortunate later generation veil, but it deserves attention for being one of the most impressive action-platformer titles ever released for the system. While published by the well-known Taito, very little is known of its developers, Takeru. The only thing that can be said for certain is they should have made more games if all of them would be as good as Little Samson. 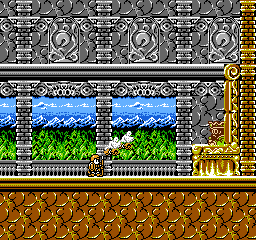 The basic premise is told through a few cutscenes without any dialog, wherein an evil green wizard destroys the soldiers of a king, who promptly sends out messages to four heroes and tasks them all to save the land. These heroes are the titular Little Samson, Kikira the dragon, Gamm the golem, and K.O. the mouse, all of whom exhibit different abilities in their own introductory stages that you can choose to tackle in order.

Samson’s the most well-rounded hero with the ability to climb walls and ceilings, tossing out straight-flying bells as fantastically improbable (but effective) weapons. Kikira is able to fly through the air for several seconds and breathes out arcing fire which can be charged up to three levels. Gamm moves slowly but takes a lot of punishment, can walk on spikes without any damage, and toss out powerful punches in the four cardinal directions. K.O. has a tiny lifebar, but he moves fast, jumps high, can also climb walls and ceilings like Samson, fits into small passageways, and while it can be tough to hit with his bombs, they do great damage if deployed at the right time. 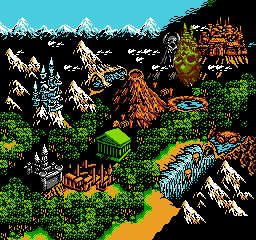 The four heroes come together after their tutorial levels, but Kikira initiates a fight against Samson implying some bad blood between them. After Samson beats Kikira, the two put aside their differences and begin the game proper, where you can switch between the four heroes at will while the game is paused. There are overall approximately twenty stages in the game, ranging from ruins to rivers, jungles, caves, castles, and the like. All levels after the tutorial courses can potentially be beaten only using Samson, but Kikira and K.O.’s enhanced platforming skills along with Gamm’s incredible strength make the stages and enemies easier to deal with. The baddies in question consist of basic one-eyed worms, large ceiling-clinging pillbugs, skeleton soldiers on spring shoes, and lots of bouncing eyeballs. More threatening monsters include exploding air mines, floating skulls that spit out smaller skulls in eight directions, and mages that conjure thunderbolts to strike your exact position.

There’s overall a fine variety of enemies that don’t usually feel too overwhelming, but they do become noticeably fiercer in later levels. The classic hazards of pitfalls and spikes are ever present and require fair use of all characters’ abilities to clear without much difficulty. There are some helpful items, including basic small and large hearts for life recovery and bonus lives in the form of literally little Samsons. You can also find hearts encased in orbs which increase a hero’s maximum lifebar by two notches, though only so many can be collected for each individual character. Gamm gets the most, then Samson, then Kikira, then K.O., who still can’t take much damage. 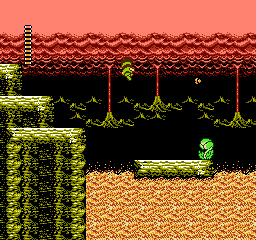 The rarest and most useful items are life potions which completely heal a character’s life, though each individual character can only hold onto one at a time and they need to be used from the pause menu. Any character besides Samson who dies in a level remains dead unless the current stage is cleared or if a deceased character has a potion to revive them. Every stage is thus designed so that only Samson is needed to beat them, but having Samson’s comrades along makes things overall less stressful. With an “Easy” and “Normal” difficulty to choose from, the game runs on a good challenge curve that tilts a bit on the easier side due to extra lives being somewhat generous, though the heat does turn upward in the final levels.

The straightforward and polished mechanics make for a tasty sundae, but Little Samson‘s astounding aesthetics comprise the whipped cream and maraschino cherry. Proudly proclaiming itself as a latecomer to the NES library and thusly taking advantage of its technological extremes, the graphics are bright and colorful with some of the most fantastically animated sprites on any console. Nowhere are the visuals more flagrantly shown off than every time when Samson jumps, gratuitously twirling his body around for even the tiniest leap. 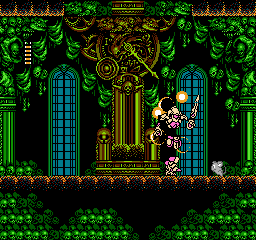 The sound design is good if not stellar; each hero is accompanied by their own leitmotif, changing the music every time you switch over. These themes may get a bit redundant after a while, but they’re done well enough to never come off as obnoxious and fitting for each hero. Samson’s peppy and spirited music fits for his main hero role, Kikira’s breezy carefree tune evokes the feeling of flying, Gamm’s slow march compliments his bulky form, and K.O.’s jazzy track works for his sneaky behavior.

When it comes to the game’s visual appeal, the bosses deserve special mention for looking incredibly wicked in addition to being fun and challenging battles. Many of them clash with the cute designs of the protagonists and would look more at home in a game like Castlevania. The green wizard from the intro is one of the earliest bosses you face, and he fights suspiciously like Dracula from Castlevania before morphing into a large cyclopean fireball-blasting monster. Other awesome fights include a creepy blob full of skulls that summons even more skulls to kill you, a skeleton horseman who refuses to stay down even after you destroy his equally skeletal steed, a tough blue knight who strikes you down with lightning, a gigantic flying dragon that essentially rips off the mecha-dragon from Mega Man 2 (you even fight on a sparse three blocks in midair!), and the grim reaper itself in a further Castlevanian parallel. 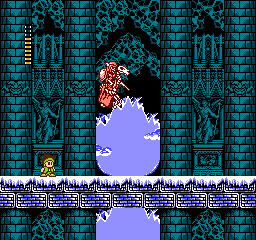 One of the hardest fights near the end of the game is a golden archmage who shoots many direct and bouncing projectiles before morphing into a dragon skull head, spamming energy blasts while hovering in the background. This jerk is tough enough to be the final boss, and he is if you chose the Easy difficulty. Playing on Normal summons the true finale, a dark floating castle that comes in three stages and reprises four boss fights. Samson’s friends stay deceased even if you beat the first two parts, making this section particularly challenging if you don’t want to lose all lives on purpose just to bring them back. Ta-Keed, the prince of darkness and the true final boss, tosses spheres that cause unavoidable explosions, but becomes easy once you realize these spheres can be destroyed… too bad he sheds his cloak, summons a large sword, and leaps around the screen stabbing around and blasting red balls at you. While a suitably tough final challenge, it’s not over yet as you have to escape the crumbling castle and use all four characters’ abilities to reach the end. 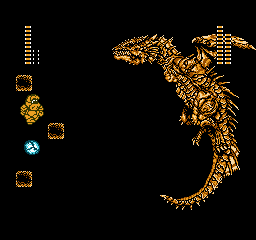 Little Samson has it all: Gorgeous graphics, vibrant music, solid gameplay, an even difficulty curve, and decent length (approximately an hour for skilled players) over numerous levels with good variety. It may not do anything particularly innovative, but what it does, it does with fantastic vigor. It is thus lamentable that it remained obscure to the public save for a feature on issue #40 of Nintendo Power, but its obscure status was all but unavoidable. Coming out as a late NES game when support for the SNES was in full swing doomed it to obscurity, and it is unlikely that it could have been made earlier than it was with its advanced graphical detail. As the only game of its kind with no plans for any sequels or additional memorabilia, Samson and friends had little chance to prosper outside of their current cult status. Today, the American cartridge is one of the more sought-after collectors’ items for the system, rising to exorbitant amounts and sometimes exceeding $1,000. However, it comes highly recommended to enjoy one of the many buried diamonds in the rubble of the NES’s software library.