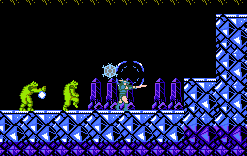 Dragon Fighter is one of those forgotten NES games that desperately needs a modern remake. It’s a game where you fight monsters as a sword guy who can also turn into a dragon and breathe fiery death on everyone, a concept that inherently benefits from a budget and better technology. It combines two different genres in the process, and this alone would make it an indie darling if it was made today. Dragon Fighter was one of those weird late releases on the NES, one that benefits from a strong understanding of the technology on display, but also had to deal with the looming shadow of the Super Famicom and SNES, cutting out any major success. It’s a shame, because Dragon Fighter‘s novelty alone makes it something worth revisiting.

The story given in the manual is about as generic fantasy as it gets. The evil warlock Zabbaong attacks the land of Baljing, a great dragon spirit possesses the statue of a great warrior to fight him, you go save the world. To do so, you have to go right through six stages with very minimal platforming and kill everything you see, defeat every boss, and finally defeat Zabbaong in a shoot-em-up battle in dragon form. To the game’s credit, it really sells the epic scope in the final stage, as you move at high speeds and see the land behind you as you dodge and fire upon a gauntlet of enemies. 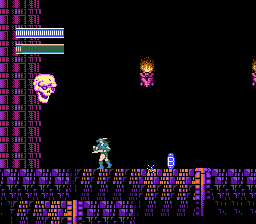 The warrior combat is pretty simple stuff. Move around and slash with your sword to hurt enemies. The jump slash is the same as a standing slash, and you also have a crouching pose slash. The jump controls exactly as it should, fluid and with the proper amount of weight, not too dissimilar from Mario. Nothing terribly impressive, but all functional and smooth. The innovation here is the dragon form, which can be activated after the meter is filled halfway by killing enemies and starts flashing by holding up at the height of a jump arc (and return to human with the jump button and down held down). Once in dragon form, the screen starts auto-scrolling for as long as the mode is active, and you can destroy most everything that crosses your path with eight directional movement. You’re stuck facing right, but that hardly matters much when you can rain death from above. The dragon also has multiple types of projectiles based on the outfit you’re wearing.

The warrior can pick up little capsules marked with either R, B, or G (red, blue, or green) that cause their sprite to change. It has no affect on the warrior, just the dragon. A red dragon can drop a fireball that spreads out on the ground, green can fire off three bullets in a fan formation, and blue fires homing orbs. Each is more useful on different stages, but know that you’re usually better off ignoring red and going for blue whenever it shows up. Homing attacks make some bosses child’s play. For the final stage, though, you remain in dragon form the whole time with a straight shot, which is sadly not ideal with the variety of enemies on screen that also shoot straight. As for other power-ups, enemies sometimes drop energy potions, flows that add to the dragon meter, and rings that wipe out all enemies on screen. The warrior’s health also increases every time he finished a level and collects a new staff. 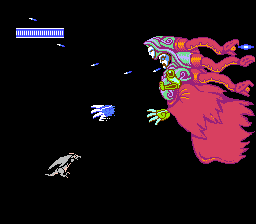 There are some cool structures and decorative touches, like lights in the sky in the snow area and the Alien-style architecture in the second stage, but the presentation suffers from the need to make room for the dragon gameplay. Levels are simple, vast and empty for the most part so the dragon can easily move around and attack, leaving a lot of empty space. A good few stages have almost barren backgrounds with one single color, and the variety of monsters doesn’t feel as large as it really is because not many appear on screen the majority of the time. On the plus side, this allows for large bosses, and the final stage is a visual marvel for the NES. There’s even some surprisingly complex arrangements in the score, truly putting across an epic scope. There’s a bit of a Castlevania vent to some arrangements, and others closer to a Mega Man style. Overall, it’s a great set and makes every area and encounter equally exciting.

Dragon Fighter lacks tight level design, as every stage is mostly a wild gauntlet you have to survive, but that dragon form is a major game changer that makes it worth trying. It’s hard (and unfortunately has limited continues), but it’s short if you know what you’re doing and offers a unique mechanic among the NES’ action game library. It’s not one of the best, but certainly one of the more memorable for technical accomplishments and the successful implementation of an experimental mechanic.