Demon Sword (or Fudou Myououden in Japan, translated to “The Legend of Acala”) isn’t technically a sequel to The Legend of Kage. Rather, it’s a whole new, longer game that takes its high flying mechanics and fleshes them out significantly for the console environment. The hero wields both shurikens and sword attacks, and has similar, super-high jumping techniques that can carry him through the air for several screens. However, there are a lot more stages (7 in the American version, 13 in the Japanese one) which are all much longer than anything found in The Legend of Kage. Each level is huge, but they’re also extremely repetitive, sometimes recycling layouts to the point where it feels like you’re running in circles. 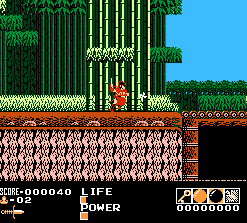 There are a number of power-ups and spells to find, which increase the power of your throwing stars or temporarily summon shadow doubles that follow your character, a la Ninja Gaiden II (which this game predates). Additionally, each level contains a number of locked doors. If you find a key (which randomly pops up when you defeat an enemy), you’re taken to a small subspace area where you’re either granted a piece of magic, or confronted with a midboss – who, after being defeated, will also give you special magic. The boss battles at the end of each stage are often quite rough, featuring erratic patterns and questionable hit detection, so it’s imperative to stock up as much magic as possible to enable you to attack from a distance. However, every few levels, your sword will grow a little bit. You start off with a near-useless dagger, but by the end of the game, it’s a huge, badass blade that’s almost the size of the main character.

There are a number of significant differences between the Japanese and American versions. Fudou Myououden is much like The Legend of Kage, in that you can only take a single hit before dying. There are power-ups that automatically resurrect you after getting hurt, but given the way that enemies fly all over the place, these get eaten up pretty quickly. Demon Sword grants you a life meter, so you can take much more damage. Additionally, one of the randomly dropped power-ups will extend your life meter permanently. It’s all too easy to simply fling yourself through each stage, all while avoiding enemy confrontations, but this gives you some incentive to stick around and engage enemies until they drop what you want. 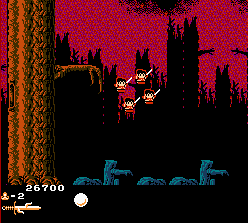 In Fudou Myououden, most of the regular enemies only take a single hit to kill. In Demon Sword, even the weakest of enemies will take two or more hits. However, you can also upgrade the power of your shurikens – in their powerful form, you’ll send out a single huge, spinning blade which tears through practically anything. Since you can enhance both your strength and endurance, Demon Sword is definitely an easier game.

However, a bunch of stuff was also left on the cutting room floor during localization. Fudou Myououden contains six extra stages, more enemies, and a few more magic spells. These include a hurricane, which slowly wipes out foes across the screen, an item that temporarily transforms you into a dragon, and a strange power-up that turns your character into four spinning, chibi renditions. Some of the bosses have been shuffled around, too – a few of the ones that were cut show up in the subspace levels. In Fudou Myououden, these levels are either pitch black or have a blue background and blocks around Sanskrit characters, while Demon Sword only has the latter. The title screen and password system also differ. Both games have passwords, but in Demon Sword you need a cheat code to obtain and enter them.

The storylines are completely different. Fudou Myououden is heavily based on Buddhist lore – the hero, Ashura Nahata, has the blood of the deity Acala, and his goal is to assemble the legendary Nanatsusaya no Tachi sword, also known as the Shichishitou. The heroine is also Sayo from KiKi KaiKai / Pocky and Rocky, who only appears in the ending.

In Demon Sword, the story is much simpler – you control a warrior named Victar, who must travel the world to assemble the titular demon sword. It has completely misleading cover artwork that depicts a generic, Western-looking barbarian holding the sword up high, which still looks like the seven bladed Nanatsusaya no Tachi. This completely ignores the fact that the game takes place in an obviously Asian setting. Sayo is still in the ending, but Demon Sword cuts out the close-up picture of the couple.

Honestly, neither of these versions are spectacular. The levels are long and not terribly interesting, and the enemies – bosses especially – can inflict way too many cheap hits. Although all of the additions are cool, the gameplay just doesn’t hold up when removed from the quick plays of The Legend of Kage’s arcade game. Still, overall, Demon Sword is eminently more playable just because you aren’t dying every few seconds. On the other hand, Fudou Myououden has quite a bit more content. It would’ve been nice if Taito hadn’t hacked out such a huge portion of the game for America, but the reduced difficulty level probably makes it the version of choice, if you had to pick. 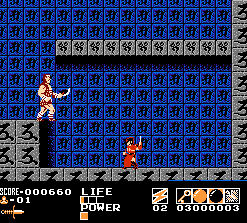 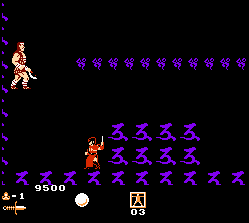