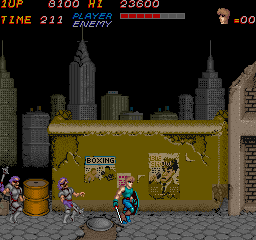 In 1984, Irem developed Kung Fu Master, the arcade game that more or less established the “walk forward and beat up dudes” trend that influenced so many games after it. While the company continued the formula with a few follow-ups like Vigilante, the original designer, Takashi Nishiyama, had left for Capcom, where he took the basic concept and evolved it into the game Trojan.

Taking place in a post-apocalyptic future, you control a soldier who, unlike many brawler heroes, carries a sword and shield into battle. As with Kung Fu Master, enemies flow forth from both directions, but slashing those guys with a sword ends up being slightly more satisfying than just kicking them, plus the added length of the weapon makes it a little easier to play. The shield also adds an interesting defensive element, too. However, while useful for blocking projectiles, it’s harder to use properly in close combat due to the erratic nature of enemy attacks. Plus, they aren’t stunned by hitting your shield, so there’s no real opportunity to quickly counterattack. Still, you need to rely on it to some extent if you have any hope of survival.

Certain projectiles will knock both your sword and shield out of your hand, requiring you to attack solely with punches and kicks. Thankfully, replacement equipment will pop up pretty quickly. There are only two buttons on the arcade cabinet, so you need to jump by pressing Up on the joystick. It’s not a huge problem since there’s no real platforming, and it’s really only needed for when you want to take leaping attacks, fight enemies in the air, or in the few cases where you need to jump upwards or downwards between planes.

The game is quite difficult – not Ghosts ‘n Goblins hard, but still pretty challenging. Though you have eight life blocks, most attacks take off two of those, and there’s no invincibility period, so you can find yourself killed pretty quickly. Dying sends you back to an earlier checkpoint, though the stages aren’t very long, so you usually aren’t sent back too far.

There are six levels in total, most consisting of two areas and punctuated with boss fights. In the arcade version, you can start at any stage, but you only get the true ending by playing it through twice. Beyond the usual punks found in these sort of games, there’s a weird assortment of foes that include guys that wear a shell on their backs (they’re called Armadillon but they look more like turtles) and leaping deformed guys called Goblins. One of the bosses has a bionic arm (and named Iron Arm, appropriately), predating Capcom’s Bionic Commando, released a year later. At the end of the game, you face off against the gang leader, Achilles.

The first stage is the most impressive – urban decay was a prominent theme in many 80s arcade games, but the backgrounds are well designed and the sprites are nicely detailed too. The middle stages are the weakest, ranging from a mountain range to a generic bases, though they do offer some structural variety. The third and fifth level send you downward on a series of elevators, while the fourth requires that you hit certain signs to unlock hatches. The sixth and final level makes thing more interesting again, taking place in what appear to be ancient ruins, a stark change from the previous areas. So either the bad guys made their headquarters from the remains of an old civilization or they have curious taste in interior decorating.

The NES port is faithful in many ways, yet still makes a number of subtle but significant changes. For starters, the game speed is dialed back a bit – the levels are about the same length but take a bit longer to complete just because of your slower walking speed. The damage output is also lower, so you can take more hits – most regular enemies still go down with a single slash, but that also means bosses have more defense and therefore take longer to kill. So it ends up being easier in some ways but harder in others. There’s no continues by default, but you can resume progress with a button command on the title screen.

The stages are mostly faithful but with some changes – there’s a pool of water in the second area, which adds some new enemies like leaping piranhas. Conversely, the spiders in the elevator stages have been removed here, as well as the land mines later on. There’s also an added boss fight near the end of the game, against a foe named King Shriek. The mid-level map screen is more detailed, showing the descent into the enemy lair, rather than being just a straight line, probably inspired by Ghosts ‘n Goblins. The final boss fight is also broken up into its own stage, plus each boss gets their own portrait in the ending. 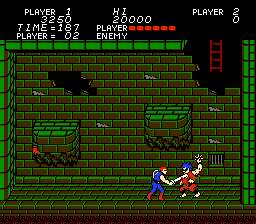 Additionally, in an element borrowed from the NES port of Commando, there are also a few added side rooms. For example, in this version you can leap down manholes and find optional boss fights in the sewer, which can give extra power-ups. One of these is a pair of boots – in the original arcade game, there are occasional “jump” blocks that let you leap super high, typically so you can attack enemies that are otherwise out of reach. There are gone in the NES version, and instead the boots replace that function, though they only stay active for a limited amount of time. Even rarer are power-ups that increase your strength and speed, which last until you die. These give you such an upper hand that the optimal way to beat the game is to find these power-ups then make it through the rest of the game without losing a life.

There’s also an added two-player competitive mode, where you players control the hero and duke it out with each other. This appears to be the first of its type on the NES, seeing as Double Dragon offered similar a whole year later. It’s also a historical curiosity since Takashi Nishiyama later went on to design Street Fighter, also technically making it Capcom’s first attempt at a one-on-one fighter, even if it’s just a tacked on bonus mode. It’s simple but fun, though a two player co-op mode obviously would’ve been preferable. 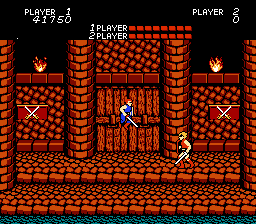 The game’s title is something of a mystery. In Japan the game is called Tatakai no Banka, or “The Elegy of Battle”, which is strangely poetic. As for the name Trojan, since the game takes place in the far future, it obviously has nothing to do with the Trojan War from Greek mythology, other than the final level kind of using that setting and the ultimate boss being named Achilles. Perhaps it was meant as a counterpart to Spartan X, the Japanese title of Kung Fu Master. The English NES manual also names the main character Trojan – this might have been a mistake, since there’s an enemy character, also named Trojan, that’s a palette swap of the hero, at least in the NES version. (He’s a distinct sprite in the arcade version.) In Japan, the protagonist is named Ryu, at least according to a comic featured in Gamest magazine. 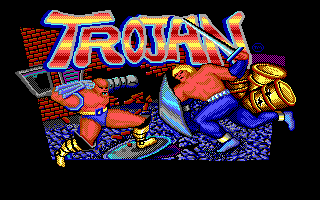 Trojan only made it to one home computer, the IBM PC. The EGA visuals are not too bad, but the title screen is hilariously awful, plus the PC Speaker soundtrack is terrible. On the surface it plays okay, though it utilizes flip-screen scrolling, and about half the levels are missing. There also doesn’t appear to be a shield button, which removes one of the main aspects of the game. A ZX Spectrum version was planned, and a partially completed version was released by the developer, Clive Townsend, in 2012. Again, it uses flip-scrolling scrolling, but despite the slightly slower speed and flickering, it plays fairly well. It’s only complete up until the third stage, though.

Ultimately, Trojan isn’t one of Capcom’s better titles – hacking up dudes is fun as always, and the shield changes up the typical formula, but its inconsistent balance makes it difficult to play for long, and so it’s remained mostly forgotten. It later showed up on the Capcom Classics Collection for the PS2 and Xbox (it’s included on the PSP release in Japan but not in North America) and later on the Capcom Arcade Cabinet for the PS3 and X360, which has some extra options in a “casual mode” that makes the game easier. In some of these compilations, you can assign a button to the jump command. In Namco X Capcom, Sylphie (from Forgotten Worlds) has an attack called “Tatakai no Banka”, named after this game. 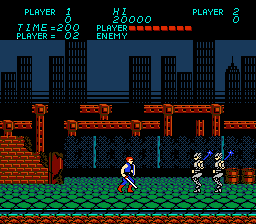 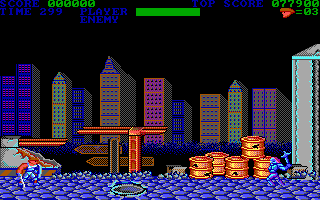 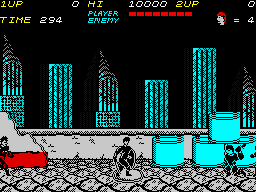