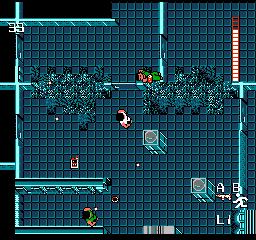 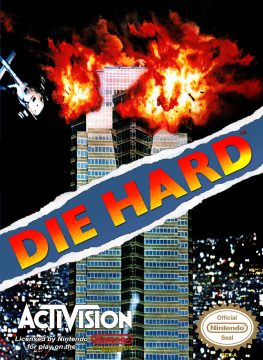 This article comes courtesy of Cassidy from the Bad Game Hall of Game, do check them out!

The NES version of Die Hard is significantly different from the home computer versions. The developers at Japanese studio Pack-in-Video opted for a top-down perspective to these proceedings, lending itself to more open floor plans with unique interactables (such as vending machines with soda cans to replenish your health, and locked doors requiring C4 charges to open). The underlying structure is different too – conventional item drops, optional side quests, and requiring the elimination of all terrorists in order to complete the game. While this may sound like it makes for a more straightforward adventure, it actually encourages the opposite: Free rein to travel across five of the seven floors in order to track down terrorists – by either stairs, elevators, or ventilation shafts – fundamentally alters the game’s structure. 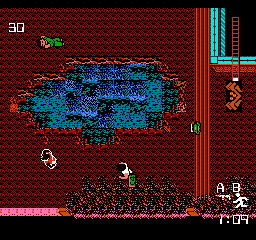 Perhaps the most contentious change though comes with a new “Feet health” mechanic, where use of the run button or stepping on shattered glass can now slow McClane down to a jerky, stuttering pace. In the PC and C64 versions, the potential to step on glass and injure your foot does exist at one point in the game, incurring a slow drain on health until dealt with. But in the NES version, it is a constant issue in need of addressing, with scattered first aid kits providing only temporary reprieve. While tedious, it does further encourage you to cut down on travel between floors, and to proceed with caution around glass during the hectic gun battles. Speaking of which, the NES game’s emphasis on running and gunning against potential multiple enemies in battle makes for a more action-oriented game overall, complete with further encouragement to spray your SMG fire and utilize new weapons (including a fire axe, flashbangs, and C4).

Much of the modern frustration with the NES game comes from players not reading the manual or having a clear idea of what they can do in the game. If given a fair chance, you’ll find a compelling action game that maintains the ingenuity of its home computer predecessors, and which can potentially provide multiple playthroughs worth of replay value: Discovering the multiple permutations of endings you can receive, optimizing the most direct routes, and mastering the frantic combat can all be very rewarding. For these reasons, it’s the best video game rendition of the original Die Hard. 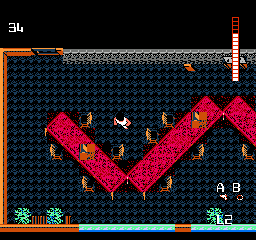 No matter which version of Die Hard you might play, you’ll experience a novel take on the action game formula. While the IBM PC release may be the most challenging and obtuse, it might capture the spirit of the movie the closest. The C64 conversion serves as a more digestible rearrangement of its PC counterpart, and may prove the most accessible of the three. The NES version provides a more frenzied and intense take on the action elements, while still nodding its head to the features that made the home computer titles so unique. Whatever your platform of choice, each title is deserving of consideration, and best enjoyed by yelling “Yippee ki-yay” before diving headfirst into the fray.