The arcade version of Turbo OutRun was basically an upgrade kit; a set of stickers and decals for the old cabinet plus a circuit board that could be plugged into the expansion slot of the original 1986 OutRun, making it cheap and easy to install. It looks very similar to the original, although the graphics are brighter and it throws a lot more crazy visual effects at you. 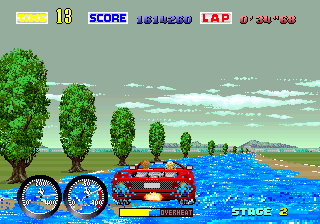 As the name suggests, Turbo OutRun comes with a new addition: a boost button that you can activate at practically any time, but overheats the engine if used too often. Cops will chase after you occasionally, although they don’t appear to have any interest in pulling you over, as they just try to knock you around a little bit. A white car will be your opponent to beat to the finish line, and at every checkpoint your girlfriend will leave you and hop into it if you fail to stay ahead.

Additions include weather conditions (rain, snow, and dust storms), and certain areas have puddles of water or ice-coated portions of the road that can make driving difficult. There are also oil slicks on the road that catch fire when the burning exhaust from the turbo boost touches them, in addition to obstacles like traffic barriers, all of which can slow you down. The car now looks more like an F40 than a Testarossa, and it also allows you to choose between manual or automatic transmission. 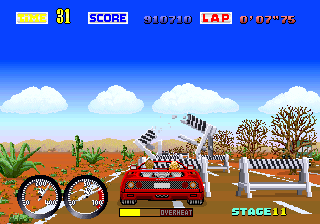 Turbo OutRun’s greatest flaw is that it ditches the multiple routes, so every time you play it’s the same trip across the United States over and over again. There are 16 stages, beginning in New York City and ending up in Los Angeles. Most of the locations have only tenuous relations to the area they’re based on, if at all – Atlanta is nothing but a bunch of sand dunes, and Pittsburgh is little more than a long, rainy field. At least there are a few cool levels, as you drive through the city streets of Chicago at night and the fields of Indianapolis at dusk. To break up the pace, there are three checkpoints, each appearing after four stages. Here, you get to tune up your car with either more turbo power, a more powerful engine, or high grip tires. It’s a nice touch but it tends to ruin both the pace and simplicity that the original is known for. 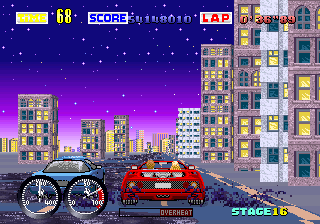 You no longer get to choose your music, as instead it changes automatically after each checkpoint. The four tracks composed by Hiroshi Kawaguchi and Yasuhiro Takagi – “Rush A Difficulty“, “Keep Your Heart“, “Shake The Street“ and “Who Are You?“ – are decent, but they lack the smooth, laid-back feeling of the original music. The shop theme from Fantasy Zone also appears during the tune-up sequences. 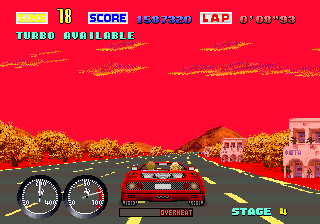 Turbo OutRun was ported to the Mega Drive. It’s fast and it plays well, but for some reason, looks much worse than the port of the original OutRun. Nearly all of the spiffy graphical effects from the arcade version have been wiped out entirely, and as a result, it doesn’t feel like there’s any difference between any of the levels other than palette swaps. Two new songs have been added, but overall the quality of the music has dropped even further. It’s a passable port, but not to the level it should be. This is one of the few Mega Drive games that was released in Japan and Europe, but not America.

The FM Towns port was converted by CRI. Though it’s still missing some background details and it’s not quite as smooth as the arcade game, it’s a big step up from the Mega Drive version. The brand new, redbook audio, arranged soundtrack is the best part of the package, greatly improving on the songs from the arcade original.

US Gold once again published the computer ports, with Probe handling the Amiga, Atari ST and Commodore 64 versions. The quality of these are about the same as the conversions of the original game.  The Amiga and Atari ST releases are by far the nicest looking, keeping many of the background details that were missing in the Mega Drive and FM Towns ports, but the animation and speed is embarrassingly choppy. The Commodore 64 game isn’t as visually attractive as either of these, but it maintains a good sense of speed, the scrolling is far smoother and, overall, this version is the best of the computer ports. The IBM PC version has a large display window that takes up a sizeable chunk of the screen. It’s smooth but totally missing the speed of the other versions, plus there is no in-game music. The Amstrad and Spectrum versions are both slow and choppy to the point of being unplayable.

The Amiga, Atari ST, and Amstrad soundtracks have completely new music composed by David Lowe, which is generally pretty decent. The Commodore 64 soundtrack was composed by Jeroen Tel, whose work is a fantastic rendition of the original arcade songs. The title theme is a brand new piece of music which remixes parts of “Magical Sound Shower“ from the first OutRun, in a style consistent with his other excellent works found in Cybernoid.

The only arcade accurate port is on the 3DS, which is only included on the Sega Fukkoku Archives 3 retail release. Other than widescreen and 3D effects, there are no major additions. 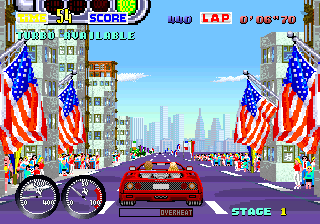 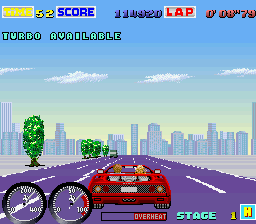 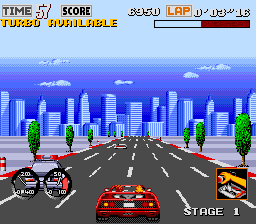 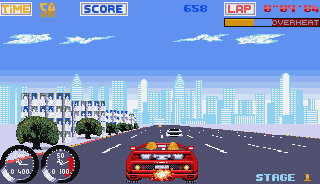 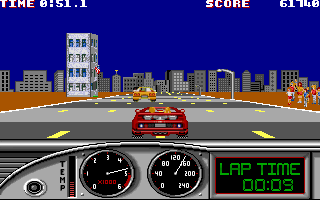 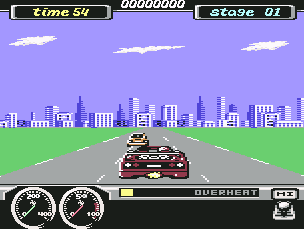 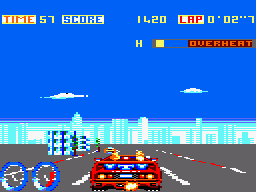 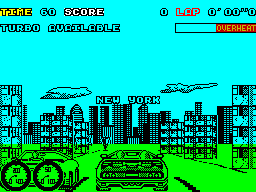