OutRun 2019’s roots are probably the most curious in the franchise. The project was originally conceived in the early 1990s as a Mega CD racing title under the name of Cyber Road. Hertz, its creator, transferred the development to the Genesis while at the same time renaming the game Junker’s High. Sega then granted them the OutRun brand, most likely to give Sims’ work the extra marketing push, resulting in this Genesis-exclusive futuristic take on the franchise.

Like Turbo OutRun, there’s a boost option which lets you go extremely fast. Rather than triggering it manually, it will instead activate automatically when you reach a certain high speed. The general feel of the game is a little more somber and darker than its predecessor’s breezy worldwide jaunts, making the tracks rather dull to look at. The redesigned car isn’t quite as attractive as the Ferraris of old, but its design is fairly cool, at least. The music is a collection of bad techno songs, composed by “real“ bands like “Dual Noise“ and “Hyper Sonic Gang“, which are likely pseudonyms. 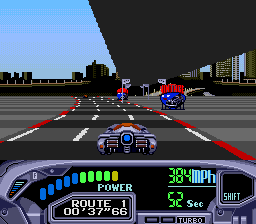 Despite feeling more like a depressing version of F-Zero than OutRun, at least OutRun 2019 still succeeds on a technical level. There are four stages, each divided into many tracks, which makes the game slightly longer than the original. Each stage section has its own background, and there are ramps you can use to jump to other sections of the road. There are also some nice graphical effects, like tunnels and overpasses. It’s extremely easy to fall off if you’re not paying attention. Also new (and unwelcome) is the big tech-y dashboard on the bottom of the screen. So while the core of OutRun games is largely missing, the game controls well and has a respectable sense of speed, making it a decent racing game in its own right.

The regional releases have different top speeds – 241 km/h in Japan, 682 km/h in Europe, and 682 mph in America. This only affects the speedometer, as the actual speed is identical for all. 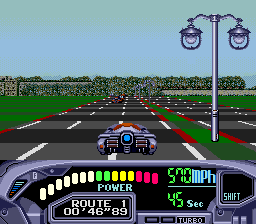 OutRun 2019 was also released in 2005 as a standalone game system that hooks directly up to the TV, complete with an analog “steering wheel“. Why they went with this game and not the original OutRun is unknown, though it may have had to do with the license (or lack of) for the original Ferrari car.