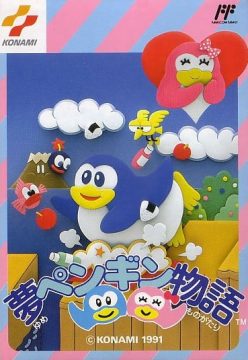 After spending Antarctic Adventure and Penguin Adventure running all around the continents, Penta the penguin settled down with his girlfriend Penko and became lazy and fat. She gives him an ultimatum – lose the weight or she’ll ditch him. Waiting in the shadows is the nefarious Ginji, seeking Penko’s heart for his own. Penta begins an exercise regimen, but Ginji sends his minions to attack him with snacks and send his diet off course. It’s only with hard work that Penta can shed the pounds and win back his lady love. 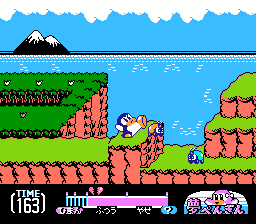 Yume Penguin Monogatari (“Dream Penguin Story”) is just ridiculous. Most of this has to do with the insane cartoon logic that the game operates by. Penta has three different states, based on his weight, and indicated at the bottom of the screen. He starts off chubby, with a kick attack; when obese, he chugs along slowly and can barely jump, but can body slam enemies; and when skinny, he shouts at enemies, which fires a projectile across the screen. One would think that regular exercise (running, jumping, etc.) would have an effect on Penta’s weight, but it doesn’t. Instead, items like riceballs and apples will cause him to get fatter, while vitamin drinks will make him thinner. Falling into water will cause him to inflate like a balloon, immediately catapulting him to obese state while he floats back onto dry land, while apparently retaining his water weight. The flagrant disregard for nutrition and metabolism is endlessly amusing. 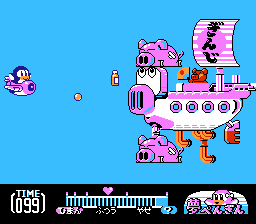 Since there’s no life meter, just your weight indicator, you can’t technically be killed. Even running into an enemy will just stun you, so you really only need to worry about the unhealthy food. However, each level is timed, plus there’s a weight goal that you need to maintain. There’s a phone at the end of the level where Penta talks with Penko, and if he’s not skinny enough, it’s game over. The final shot of Penta, sadly eating a cookie, is the epitome of 8-bit tragicomedy. 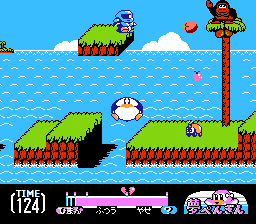 While there’s an air of body-shaming cruelty that surrounds the whole game, it’s hard to take it seriously when everything is so incredibly silly. The visuals are some of the brightest and most colorful on the Famicom, and the sprite of Penta waddling along, regardless of his health, is priceless. The music is similarly peppy – the tutorial theme is short but prepares you for the silliness ahead – while the rest of the tunes are easily as goofy. 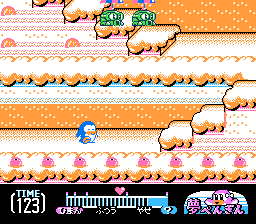 There are also two endings. In the last stage, Ginji steps out from the shadows and decides to kidnap Penko outright. If you defeat him and you miss your weight goal, Penko still leaves her hero and stays with her kidnapper, which is remarkably cruel. If you get skinny, though, Penko stays while gorging herself and stacking on pounds. There are some weird gender politics to unpack here, but it’s probably best not to think about them in a game featuring goofy cartoon penguins. 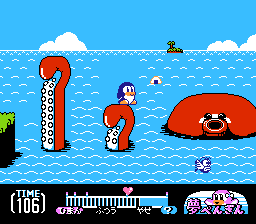 The only truly negative thing to be said about Yume Penguin Monogatari is that it’s just too short. There are only six brief stages, two of which are side-scrolling shoot-em-up segments. This particular genre was Konami’s specialty back in the era, but here they’re just kind of dull. Your default weapon is too weak, and while it can be powered up, it disappears when you get hit. Plus, the size of Penta’s ship makes it difficult to avoid hits. (Though in another bit of silliness, the logic here is that when the plane is destroyed, Penta self-inflates to stay in mid-air until a replacement plane flies in, also adding extra weight.) Plus, the final level is just a few screens and then a boss battle. It’s also a pretty easy game – bosses will toss out vitamin drinks peppered among their regular attacks, so you can easily regain your skinny state. 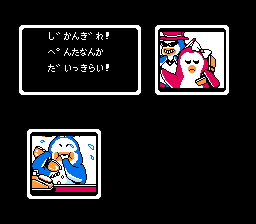 Ultimately, when the worst thing you can say about a game is that “there’s not enough of it”, that’s a pretty okay problem. Despite Konami’s enduring obsession with penguins, this was the last game in the series, beyond some medal and mobile games. 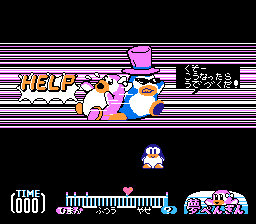 Penta is featured in the MSX Parodius, while his son Pentarou stars in subsequent Parodius games. He also pops up Konami’s Ping Pong, and was added to the mobile port of Wai Wai World to replace King Kong. In 2006, Konami published a digital comic called Penguin Adventure: Penta no Daibouken: Korokoro kokoro no Penko-hime (“Penta’s Great Adventure: The Colossal Heart of Princess Penko”). It’s loosely based on the plot of Penguin Adventure, with 20 episodes total.