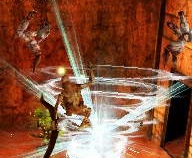 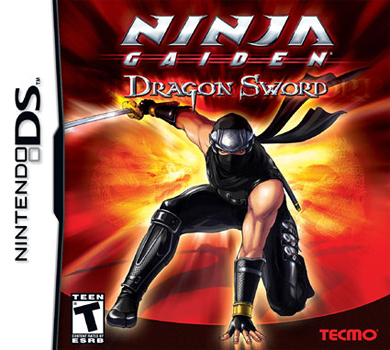 Six months have passed since the “Dark Dragon Blade Incident”, how the events from the Xbox game are now referred to. Ryu has rebuilt the Hayabusa ninja village and lives there with the surviving members of the clan. While he is training his new pupil Momiji, the still weakened village is suddenly attacked by the infamous Black Spider Ninja Clan (it was they who were already tailing Ryu throughout his Xbox adventure) to steal the Eye of the Dragon, a mighty artifact able to upgrade Ryu’s sword to the True Dragon Sword form.

After single-handedly destroying the Vigoor Empire and the Dark Dragon Blade, he rebuilt the Hayabusa village and is now training a new generation of Ninjas, as…

Ryu’s most promising pupil, the kunoichi Momiji, gets kidnapped by the great witch of the Black Spider clan. She’s briefly playable in the opening segment.

Luckily, he is staying at the Hayabusa village just when he is needed most. He once again sells all kinds of useful things to Ryu.

One of the four ninja brats. He is quite the bookworm, and gives Ryu useful hints, ending every sentence with “That’s what it says in this book, anyway.”

The only girl among the four little kids. She asked Momiji to bring flowers to Kureha’s grave and thus blames herself for the Kunoichi’s kidnapping.

Another kid in the Hayabusa village. He dreams of being a ninja as strong as Ryu one day.

This chubby but inventive little guy seems to have a crush on Sakura.

The good soul of the Hayabusa village. Or something like that.

The great witch of the Black Spider Clan (Obaba literally just means “great witch,” but it was left untranslated nonetheless), who is behind the theft of the Dragon Eye and Momiji’s kidnapping.

The Ancient Greater Fiend of Creation. She seems to be involved in the doings of Obaba and the Black Spider clan.

The Ancient Greater Fiend of Death and Destruction and Ishtaros’ twin sister.

Kureha
This time she – or her spirit – takes a more active role in the events, but ironically, at the same time she isn’t featured in the manual anymore…

This is the premise to the first modern Ninja Gaiden handheld game, but this time, the pen… er… stylus is mightier than the sword. All of Ryu’s attacks are now executed through the touch screen, and the only button you’ll have to press throughout the game is the block button. What might sound odd works astonishingly well, and in no time you’ll find yourself easily pulling off complicated maneuvers like the Izuna Drop. You walk by holding, attack by stroking through the enemies, and even can use your throwing stars or the bow by tapping on the screen. Jumps are realized through upwards strokes. Also, Ninpo is executed by drawing a symbol, and you can direct it’s power afterwards. You hold the DS vertically like you’re scribbling into a notebook, and thankfully there’s also an option to flip the screens for left-handed use. Ninja Gaiden Dragon Sword is easily one of the few games, alongside titles like The Legend of Zelda: Phantom Hourglass, Trauma Center and Elite Beat Agents, that make thorough and well thought out use of the DS’ capabilities. The only move that doesn’t work quite as well is the Ultimate Technique. You’re supposed to rub the screen to charge it up, but if you don’t to it just right, you’ll execute several other commands before and waste precious reaction time. There’s also a function for the microphone, but that is a very secondary one and feels kinda tacked on. 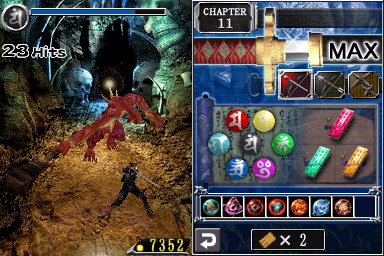 Of course, no one could ever expect a DS offshoot from the 3D Ninja Gaiden series to come without cutting back compared to its big brothers. Instead of a real time 3D engine, it counts on pre-rendered 2D backgrounds, like many of the better looking PS1 games did. However, for boss battles it switches to a 3D arena, and by the difference in detail you can see why they preferred the other alternative for the bulk of the game. The backgrounds look quite good, but they’re a bit too static. Like, completely-still-waterfall static. The characters are decent 3D models but fit smoothly in the environment, except for a few passages where the nature of the engine shows its limits. For example, Ryu’s not able to jump over the handrail of a staircase, although his jump is clearly much higher than the rail. The cut scenes are shown as colored manga-esque comic sequences, which are beautifully drawn but bring a lighter atmosphere to the whole story, which might not appeal to everyone used to the violent, dark tone of the console games. This is be the only newer Ninja Gaiden game getting a Teen rating in most regions. In consequence, there’s also no blood to be seen, much less beheadings. 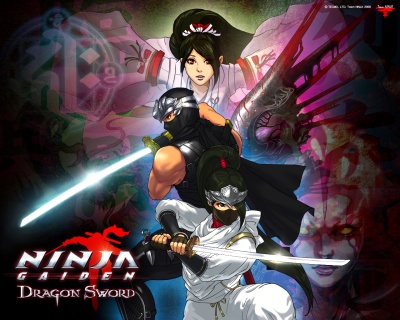 As good as the graphics look, they sometimes can get boring to long time Ninja Gaiden fans. Most of the enemies and bosses are recycled from the Xbox game (with some of them slightly simplified gameplay-wise), and also quite a few of the levels look more like a “best-of” compilation, than a completely new game. Sadly, the levels don’t quite hold up to the standards set by its predecessor. Most of the time you feel like running from arena to arena, with the only platforming sequences being repetitions of the same wall jumps. Puzzles are also rare, most of them requiring use of one or more of your Ninpo techniques to solve. There’s seven of them now, though some are more useful than others. In turn, you have to rely completely on your Dragon Sword for close combat, since it’s the only weapon you get. After all, this is called Ninja Gaiden Dragon Sword, right? At least you can upgrade it, but that makes it only more powerful without expanding your repertoire of attack moves or combos. The only new attacks you learn after the beginning are the multiple Flying Swallow technique against flying enemies and the counter, but the latter one doesn’t seem to work too well here. The connected world of the first game was also abandoned, and you now access most of the several chapters through stone circle portals, with the Hayabusa village serving as your base to shop at Muramasa’s store and chat with the villagers. 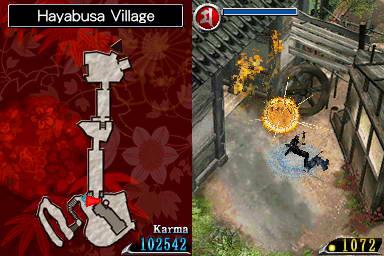 Not only did the gameplay get simplified, also the difficulty level has been lowered noticeably, which will please the many gamers who had to yield to the unforgiving Xbox game. But all the others might find that they overdid it a bit, and most of the bosses are ridiculously easy, at least on the only difficulty level that’s available from the start. The dragon statues, formerly used plainly to save the game, have enhanced now, and in addition to auto saving(! Take care to copy your save if you plan to revisit a certain chapter directly, as you also can’t go back to finished areas), they also recharge your life and Ninpo magic. Also, now a good portion of your life bar turns gray after damage, which will regenerate after each battle, which is quite necessary, since there aren’t any refilling potions anymore, and you never get more than one Ninpo charge at a time during the entire game. 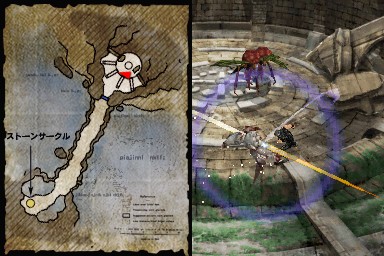 That said, despite all its shortcomings, Ninja Gaiden Dragon Sword is nonetheless one of the most entertaining games on the DS and really worth it, if only to show off the real potential of Nintendo’s hardware. As most handheld games, it’s rather short, and skilled players won’t need any more than five hours to play through the story, but there’s enough replayability value to keep you at it afterwards. Through finishing the game, you unlock more and more difficulty settings, with each one containing individual wooden plates at a total of 45 to be found. Most of them are accessible through fiend arena challenges, but there’s also some hidden ones you’ll need the microphone to make appear. With these plates you unlock a gallery with lots of bonus content, like character profiles, in-game cut scenes, and letters from the villagers. You can even play the “Path of the Master Kunoichi” as female ninja if you manage to beat the quite unfair first chapter boss battle with Momiji. 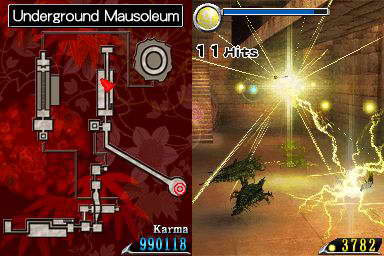