Irem is the company behind R-Type, undoubtedly one of the most influential shoot-em up series this side of Gradius. Sqoon is their fourth cartridge on the Famicom and their first original product for Nintendo’s console, after two ports of their own arcade games (Zippy Race and 10-Yard Fight) and the licensed Spelunker. And yes, Sqoon happens to be an horizontal shoot-em-up, though this one is starring a pink submarine.

And what about submarines? Actually, the world already had plenty of oddly-colored subs. You’ll certainly recall the yellow one of Sgt. Pepper, one of the most recognizable pop icons of our times. A decade prior to that one however, there had been a pink submarine too, in the 1959 Hollywood movie Operation Petticoat, a comedy starring Cary Grant and Tony Curtis as two clueless U.S. Navy officials who ultimately get to see their own submarine painted in pink by the crew of stranded nurses they took onboard, because the grey paint was out of stock.

Anyway, Sqoon is a shooting game made by Irem and stars an eponymous pink submarine. In videogames, everything has vivid colors, so a pink sub doesn’t really stand out as it does in a 50’s flick – the Sqoon is just like a waterproof Winbee, after all. Also Sqoon feels a bit dated – and probably felt so even in 1986. It was the year that Darius hit the arcades, speaking of “fishy” games. 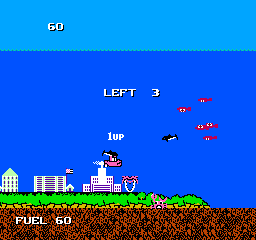 The whole setting has an aura of twisted brilliance. You see that pink sub shooting fishes and you think it’s yet another nonsense, surrealistic cute-em-up. That’s not quite the case – Sqoon actually is built around an odd sci-fi premise. The Neptunians have invaded the Earth and they had a great plan this time – melt the polar ice caps and flood all the continents. Mankind is just livestock for them. The Pentagon can only ask pirate Narikeen to save the day. With his Sqoon, he’ll travel through eight sunken zones: Hawaii, China, India, Egypt, Greece, England, the North Pole and finally New York, rescuing poor humans while kicking alien ass.

First off, hats off to the man who conceived such a setting for the game. It’s also a bit eerie (and vaguely Bydo-ish?) when you realize that all the cities you see in the backgrounds represent the Earth literally submerged, and that humans (“Man-ham”) are now enslaved underwater-like cattle. The sunken cities you see at the beginning of each phase are pretty much the only background graphics you’ll get. But in exchange for a very monotone seascape, you’ll be pleased by the overall look of in-game animations. The game is littered with tiny sprites, but unlike very early NES games, all of these sprites are charmingly in constant motion. (Don’t be fooled by still thumbnails.) Little sharks and killer whales swim across the screen; crabs and other little crustaceans crawl at the bottom of the sea; your ice bombs leave a frozen geyser; ascend your Sqoon to the surface and its hatch will open. And of course there are those minuscule drowning men, which literally burst out and choke in the water when you destroy the bio-factories they’re imprisoned within. Overall the pixel art and animation in this game is something commendable and will definitely attract you into spending a couple of lives with it. It’s also a good thing that Sqoon can show quite a crowded display without the NES slowdown. 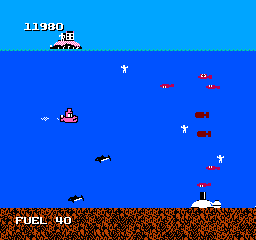 Approaching Sqoon at first can be harsh. A lot is happening and the screen is strangely deprived of gauges and other useful info. You can only see your score and the all important fuel level: the also important number of lives remaining and number of men rescued aboard the Sqoon are invisible and will show up only at the next loss of life / rescued man. The rules to survive are also found in the manual and strictly to be followed. Basically, you need to replenish your fuel to stay alive, and you can do so only in two ways: rescue nine men, or else get at least one gold ingot and one man (the single man is necessary to discharge the ore on the ship). The gold hidden by crabs acts therefore as a shortcut to get fuel if you aren’t able to collect enough men within 60 seconds, but you always need nine men to receive a weapon powerup. As soon as you have upgraded your missile twice, your best bet is to concentrate on the ore. Once you have enough men or gold, a rescue ship (a motorized island, according to the manual) will appear on the surface, and you’ll have to approach it and discharge the poor little men, getting fuel and power upgrades for your shot.

But wait, it gets trickier. All the discharge operations must be performed real time, possibly while avoiding sea monsters. That means lining up with the island, pressing the button repeatedly until every men is safe, and quickly grabbing the falling fuel tank. You can only shoot crabs for gold with your ice bombs, and you must be very quick picking that flashing bullion because the crab will soon respawn and touching it means death. Actually, touching anything that moves means death since the Sqoon doesn’t have any kind of energy bar. The exceptions are those little sharks / killer whales that swim around the submarine and apparently cannot harm it in any way. You’re soon convinced that they’re there just for cosmetic reasons, when you’ll notice that although they can’t harm the Sqoon, they are quite harmful to the drowning little men. 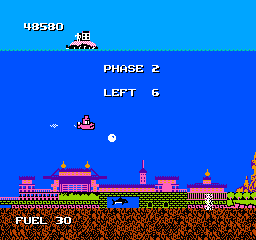 Once you’ve got a basic grasp of survival, and you learn to live with the sixty second fuel limit, things get better, and you’ll perhaps begin to notice some of the game’s more subtle features, or just plain oddities. The game takes your lives easily, but fortunately is also generous with hidden extra lives. You may find an invisible 1up lying in one of the sunken cities’ standout points. Or it may happen that one fellow you weren’t quick enough to rescue will safely reach a raft on the sea level – in that case, picking him up warrants an extra life. And finally there’s that weird sea slug thing – carpet bomb it and you’ll receive the mermaid’s necklace, which not only counts as an 1up, but also has magical powers and can warp the Sqoon in a different dimension, provided that you can reach and destroy the next biofactory without loosing a life. The “other dimension” is shamelessly one of the cheapest special effects you’ll ever find in a NES game: it basically remove completely backgrounds graphics.

Speaking of Kazumi, the mermaid, she is prominently featured in the title screen (hey look! Nudity in an NES game!), wielding that holy necklace of hers. According to the manual (which is crazy), she was the fair ruler of the Neptunians but was dethroned by the evil Baruban, thus suggesting that she’s in fact a good guy; however, when she appears during the biofactory boss, you can’t do much other than taking her down or letting her go. Maybe it’s related to the game’s second loop which, uncharacteristically for the time, features altered color palettes for backgrounds and some new enemy sprites. 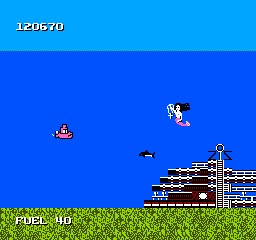 Sqoon is plagued by a design which seem to have gone in the opposite direction of shmups evolution. Its stages are quite long and repetitive, whereas these games have progressively shortened their stages’ length. It doesn’t help that, despite each phase being introduced by a brief tune, the game has basically only one music track (but that didn’t stop Irem from using a differently different song exclusively for the pause screen. Talk about bizarre.) The game also “suffers” from a certain complexity which makes it more similar to games of some years before, instead of pushing on the action side of things. You have to care about fuel, like in Scramble, something that shoot-em-up fans genuinely hate to do. You must fire continuously with two buttons, again as in Scramble or Xevious, for straight missiles and depth ice bombs. And you have to rescue tiny little men from a horrible death by drowning, a bit like in the classic Defender, just upside-down. It’s admittedly too much for a shooting game – it demands some strategy and may detract the fun in the long term. You have plenty of reasons to see why the game failed to impress in Japan and in the West, and why it was destined to shoot-em-up limbo. And yet, there are shining moments in this game.

Taken in the context of NES, it delivers good horizontal action, fluid and quick-paced. If Zombie Nation has achieved a cult status for being so bizarre, this one at least adds solid gameplay to the equation. The game has a couple of interesting ideas that weren’t used anymore, and the above-mentioned complexity can also be seen as a strength – having your hands full by avoiding enemies, rescuing men, and bombing crabs does help to overlook the game’s repetitiveness. This is Sqoon. Long gone but not forgotten: not by Irem developers, that’s for certain, as the affection for submarines has stuck with them ever since. The far more known Kaitei Daisensou / In the Hunt and U: Underwater Unit / Sub Rebellion are a testament to this little game’s legacy.

Links:
NES Wonder Blubbun at Nes Wonder took time to type the English manual.
Destructoid One of the very few articles on the net.