After the disaster that was Ninja Gaiden 3, Team Ninja apparently wisely concluded that they are not worthy of making new Ninja Gaiden games any more (no reports of anyone committing seppuku over it, though), and thus Tecmo joined the hot Japanese trend of relegating action game series to Western studios (see Castlevania: Lords of Shadow, DMC). The task fell upon Lara Croft creator Toby Gard’s studio Spark Unlimited. Keiji Inafune’s Comcept also appeared in there somewhere, but the game’s credits suggest that this was limited to a conceptual and production level.

Still, the series wasn’t given into new hands wholly, and thus this entry is more of a spin-off, starring not Ryu Hayabusa, but his newly introduced sworn enemy Yaiba. The story also lies a bit outside of the usual Ninja Gaiden territory, as the world is swept by a devastating zombie plague (as if we didn’t have enough of those already). So to get to Ryu, Yaiba has to slaughter his way through hordes upon hordes of mindless zombies.

A particularly cruel and foul-mouthed former assassin from the Kamikaze ninja clan who got expelled because of his inability to use Ninpo. Then he challenged Ryu Hayabusa to a duel to the death and lost. In short, he would just be an ordinary ninja henchman doofus in any other entry of the series, but here he was brought back with cyborg parts to star in his own game and hunt down Ryu for revenge.

To get his revenge, Yaiba is searching for Ryu, who is in turn running around to find a cure for the Zombie virus. After slicing Yaiba apart in the intro, he isn’t seen again for most of the game, but then an entire stage is dedicated to the two ninjas’ epic showdown.

The scientist who brought Yaiba back to life and turned him into a cyborg gives Yaiba intel during his dubious mission and appears as the sexy teacher in brief tutorial intermissions.

Miss Monday’s irritating boss. The Spaniard is a shady businessman who never seems to shut up and apparently views the whole Zombie Apocalypse business predominantly as a profit opportunity, but Yaiba decides to do his bidding at the time being because he promises to lead him to Hayabusa.

Momiji teams up with Ryu to assist him with her powerful ninja magic.

The most immediately obvious problem with Yaiba is that the tone feels completely out of place for the Ninja Gaiden series, much more so than even Ninja Gaiden 3. It starts out promising with a video sequence showing Ryu and Yaiba’s duel, which clearly riffs on the intro of the original NES game, but that flair doesn’t hold up for long. As soon as you’re put in the shoes resurrected cyborg Yaiba, everything turns as cartoonishly grimdark as the worst ’90s comic books. Yaiba being an unlikeable prick is certainly intentional, but it’s totally tone-deaf and just comes off as mean-spirited. Much of the background story is explained via text notes Yaiba can find, and most of them are also just crass for the sake of being crass, especially the sick, juvenile notes “from the desk of Ryu Hayabusa” Yaiba likes to fake. It’s not all terrible – some of the slapstick involving the ordinary zombies, who for some reason are compelled to take the steering wheel of any vehicle they’re thrown into and rush forward, is genuinely funny. But then the next scene contains tasteless jokes that would make Duke Nukem Forever cringe, like the vulgar taunts of the filth zombies, who are codified as former prostitutes, or a lingerie shop that has two giant animatronic legs hanging out of the roof, just so Yaiba can propel a truck in between them and stand triumphantly as thongs rain down on him. You know, from the guy who dissed Eidos marketing for not treating Lara Croft respectfully enough! 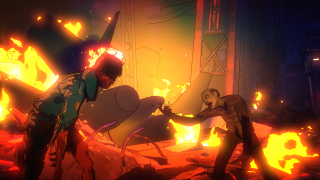 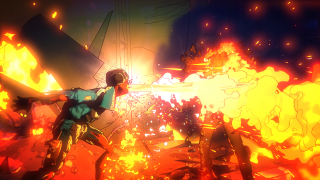 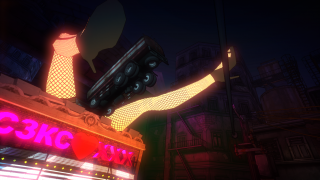 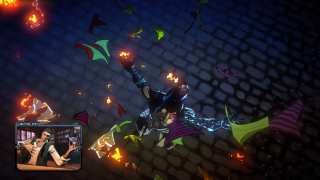 The good and the bad of the humor in four images.

Yaiba comes equipped with three weapons, which more or less represent a typical rock-paper-scissors structure. The default is his katana, which he alternates with mighty, block-breaking punches of his iron fist, and an iron chain he flings around God of War style, which doesn’t deal a lot of damage but is good for crowd control. As long as you’re just dealing with ordinary Zombies it doesn’t actually matter much which buttons you press, as long as you keep alternating the three to string them together for combos. 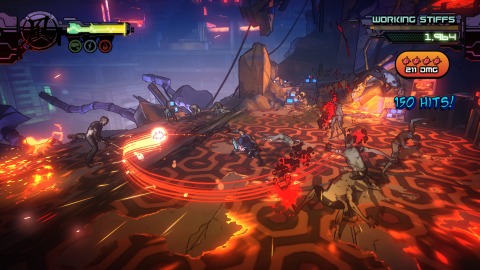 Only when some of the special elemental enemies show up, things get more interesting. There are three attributes in the game – fire, electricity and filth. If Yaiba tries to attack an electrically charged enemy with his sword or fist, he gets shocked and cannot use his cyber systems for a short while, but hitting then with the chain turns them off. When Yaiba gets hit with fire he starts burning and has to put out the flames by dashing, while filth blinds him. It’s also possible to grab certain enemies with the chain and fling them around, and combining the elements causes a number of effects. Filth and electricity encapsule enemies in a hardened shell, which can then be crushed to dispose of them, while putting filth on fire causes huge explosions. This does not only apply to enemies – a range of puzzles, typically simple for an action game, involves subjecting the environment to the elements, usually to blow open a new passage. 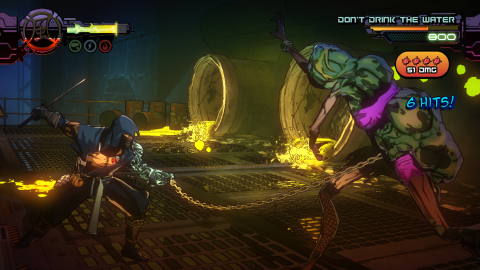 Occasionally, stunned enemies will have an exclamation mark flashing above their heads, which means they can be executed with an overly gratuitous animation. Executed enemies leave behind health recharges, which often are the only way to recover during a stage. When executing one of the stronger monsters, a button mashing QTE is triggered, in which Yaiba attempts to rip the enemy apart. Conveniently, the severed body parts conveniently always hold some kind of power – punk and clown zombies’ arms are used as powerful or unblockable nunchucks, fire giant’s heads make handy flamethrowers, and the research facility’s watchdog mechas can be gutted for rocket launchers. There’s also a berserk meter that charges up during the fight, and once it is full Yaiba can turn into an even meaner killing machine for a limited time. 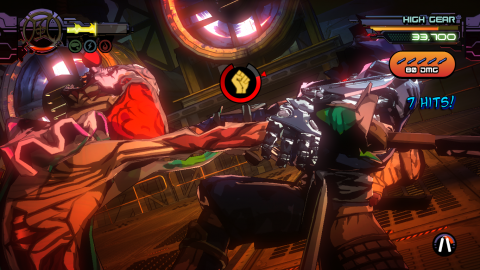 After each encounter. Yaiba is graded based on his combo counter and amount of executions. The score can then be traded for a wide range of abilities from a multi-path skill tree. Most just affect various stats in one way or another, like allowing to overcharge the berserk meter or increasing the effectiveness of various extra weapons. Some also add some valuable charged special moves to Yaiba’s repertoire. The most game changing is the one that allows to chain together up to ten executions, linked by timed QTE button presses. To extend his life bar or resistence against the three elements, Yaiba has to find various collectibles within the stages instead. 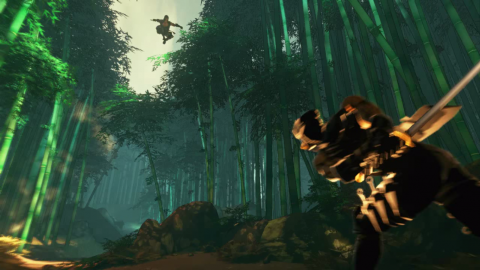 Mechanically, Yaiba would be a fairly decent if unremarkable brawler, but unfortunately the camera is terrible enough to make the game more frustrating than even the hardest Ninja Gaiden games before. There are even two settings for the camera, but one is so close to the combat and so inflexible, that you never know what goes on around the battlefield and are constantly ambushed from off-screen. The other is so ridiculously far away that Yaiba is completely drowned in zombie hordes and you get no sense of your location. Forget Waldo, you can play “Where’s Yaiba?” right here.

Aside from the camera issues, the game never is terribly hard on its own, but there are some odd difficulty spikes throughout, followed by more hordes upon hordes of fodder enemies. Especially the health upgrades make a lot of difference in terms of difficulty, but because you’re always tied to the angle-locked, claustrophobic camera in between battles and the stages are so full of invisible walls that it’s no fun to look for them at all. It almost seems prudent to play the game on easy even for skilled players, just to get through with it without subjecting yourself to frustrating attempts at exploration.

For all that matters, Yaiba is best described as a return to the pure beat-em-up roots of the franchise. There are platforming sequences, but they’re all essentially just bad QTEs – there are no explicit button prompts, but the passages are completely linear and every time Yaiba has to jump or grab a hook with his chain to swing around, the game goes to slow motion and the next step in his way flashes up, so there’s no need to figure out how to go on and no challenge, really, except the deaths that arise from the game’s arbitrary distinction whether it wants you to press the jump button to smash a wall in midair or not. 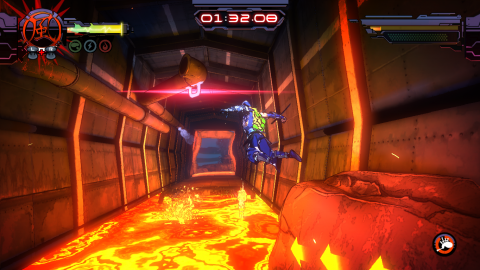 When completing the game, not only do you get a schoolgirl outfit for Yaiba (there are more typical Ninja Gaidencostumes available as DLC), but you also unlock Ninja Gaiden Z mode. It starts out with a NES style title screen and chiptune music from one of the classic games, but it’s all just a huge trolling. After terrible, terrible low-res still image cutscenes full of embarrassing pseudo-Engrish that doesn’t even get how real Engrish works, you’re simply back in the normal Yaiba engine again, only with a normal belt-scrolling perspective, no skill upgrade elements and no extra weapons. This mode is actually more playable than the main game, but also more boring due to the lack of variety.

It is hard to decide if Yaiba is a better or worse entry in the series than the vanilla version of Ninja Gaiden 3. On one hand, it’s not nearly as bafflingly incompetent a game, but it’s so much worse context-wise. It’s complete lack of ambition or vision also works against it. It feels like Spark Unlimited just threw a bunch of elements together, because of course those are the elements that go into an action game – brawler combat, combos, RPG elements for character upgrades, collectibles, QTEs, and so on. It’s the cynical design sensibilities of a big publisher playing it safe, paired with a 13-year-old boy’s idea of edgy – a cross-eyed 13-year-old, judging by the camera.