You could get away with calling Sega’s Kenseiden “Castlevania in feudal Japan” and simply call it a day. That wouldn’t be wrong, because there’s a lot of common ground shared with Konami’s never-ending series of vampire slaying games. Hayato, the samurai hero of Kenseiden, is roughly the same size of an 8-bit Belmont. He controls similarly, with slightly awkward jumping controls, and the attacking motions share a similar rhythm. Both games are quite difficult, although not always for the same reasons. The stage constructions, featuring the same type of diagonally oriented staircases, share some similarities. And in both games you’re fighting undead monsters, although Kenseiden draws from Japanese mythology rather than Hollywood movie monster lore. 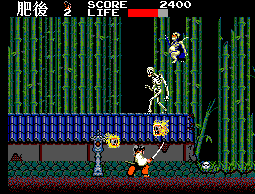 For an 8-bit action game, though, it’s remarkably open-ended. It’s not quite like Castlevania II or Goonies II, as it’s still stage-based. Rather, as samurai warrior Hayato, it’s your goal to cross over each of the sixteen providences of feudal Japan, with each province comprising its own level. At the end of each stage, you can pick to wander into a neighboring provincee. The goal is the capital of Edo, where you must take down the demon lord Nobunaga, the vaguely historical go-to figure for video games set in this era. Obviously, this is all the way on the other side of the country, but your path to get there is totally up to you. In other words, structurally it has a lot in common with the NES cult classic Clash at Demonhead. There are sixteen levels in total, and while the stages are usually pretty short, it’s still a fairly meaty game.

Amongst the provinces are six warlords (their presence is not denoted on the map), and successfully conquering them will grant another skill to your warrior. At the outset you can pull off a simple move – duck and hold down the attack button to brandish your sword forward, leaving stupid enemies to blunder in your blade and kill themselves. The first obtained skill allows you to jump higher. One will grant a powerful overhead slash, another will allow Hayato to charge forward, waving his sword slicing everything that comes near. Unlike Castlevania, there are no subweapons (and therefore no candles to attack), so these techniques are the only other offensive options outside of the standard sword strikes. There is no limit on their usage, and many are quite effective. 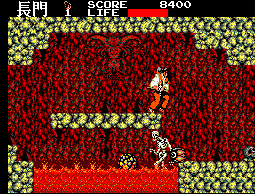 There are also two training dojos found throughout the land. These are ridiculously brutal challenges, requiring that you complete a short room filled with spikes, while being barraged by arrows from both directions. This in itself wouldn’t be too bad, but taking a single hit will cause you to fail. You can retry it almost as much as you like, at only the cost of a sliver of health, but they are still exceedingly difficult. Potential rewards include items to lengthen your life meter and talismans that act as armor. Much easier to come by are the sword icons, which increase your attack strength. Sometimes they are hidden in out-of-the-way places, but they never involve conquering any of the dojo challenges. You also gain extra lives at every 20,000 points, giving an incentive to clear out as many foes as possible.

Technically you can steer clear of the warlord battles (except for the first one) and the dojos, and just stick to the easier stages, making a beeline towards the final level. This isn’t exactly advisable, though, because you’ll find that the default skill set isn’t necessarily enough to take on the rigors of the climatic stages, and your sword will be drastically underpowered when you take on the final enemy. These light RPG-adventure elements heartily elevate Kenseiden above the ranks of a mere Castlevania clone. 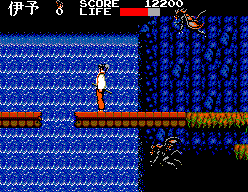 Still, Kenseiden isn’t exactly a beloved classic, and not just because it was stuck on the unpopular Sega Master System. It lacks polish, mostly when it comes to combat. A certain chain-flinging purple headed foe is nearly impossible to kill without taking a few hits. The hit detection in the boss fights can be awfully inconsistent, rendering one such occurrence, a battle against a club-wielding giant, primarily a matter of luck. One of Hayate’s biggest foes, like his spiritual descendent Ryu Hayabusa, is the bottomless pit, and they are always placed precariously so that an otherwise innocent spider can knock him to his death. This is frustrating but not without precedent – what is far more annoying is the short window of invincibility time after taking a hit. It can create situations where your helpless warrior is ping-ponged between dangers, sustaining multiple hits, potentially until death, for a single mistake. 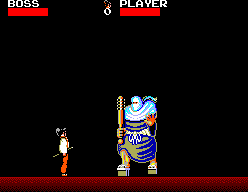 Unlike Castlevania (and like many Sega 8-bit games), there are restrictions placed on continuing after death. If you found a Diary item, you’ll come back at full strength, but if you resort to entering a cheat code, you’ll lose all of your power ups (although not your special moves), thereby requiring that you retrace your steps to recollect everything. The actual game is rarely as brutal as, say, Ninja Gaiden, but the penalties for failure are harsh.

At least it looks fantastic, The 32 color palette of the Sega Master System meant that it visually outclassed its console competitors – it’s miles beyond Konami’s NES game Getsu Fuuma Den, and comparable to Namco’s arcade game Genpei Touma Den, both titles released around the same time with similar themes. The music tracks are sparse, and not exactly catchy, but they match the dark, foreboding feeling of the visuals perfectly. Some of the levels feel like they’re duplicates of others – the construction of the two pagodas is practically identical, outside of the different enemies – a shortcut as a result of its relatively large length and small cartridge ROM (128k) size. 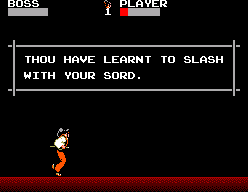 Beyond its action-RPG elements, Kenseiden is also notable for its Japanese-ness, which was surprisingly not at all toned down for (most) of its worldwide releases. The names of all of the stages are still presented in kanji, leaving non-Japanese speakers to ponder the squiggles and leave them to refer to the manual. The instructions even list the Japanese names of the special moves, although they’re (awkwardly) translated in the game. There is nothing censored, and the only alteration is an odd one. In the Japanese version, Hayato has blonde hair, which is even shown on the game’s cover. Perhaps this was deemed too manga-esque, because all of the other versions give him more typical black hair. Strangely, he has brown hair in the ending of both versions. 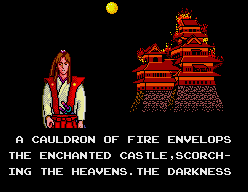 The Korean version, however, stripped out anything related to feudal Japan and changes the setting to Korea, even giving the main character traditional Korean garb. Korea, not having the best relations with Japan, tends to remove any reference to samurai or medieval Japan. Most of Kenseiden is the same, but the old Japanese map between levels is replaced with a map of Korea. (Other examples of this include Mitsurugi being replaced with “Arthur” in the Soul Calibur games, the renaming of SNK’s The Last Blade to “The Last Soldier”, and Samurai Shodown renamed as “Fighters Swords”. 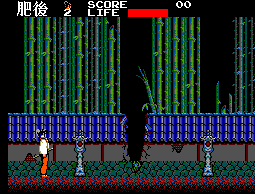 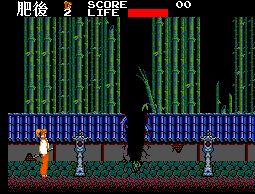 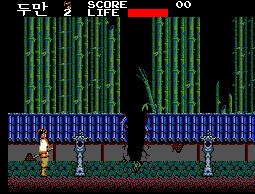 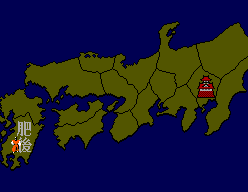 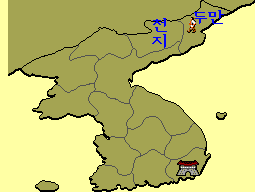