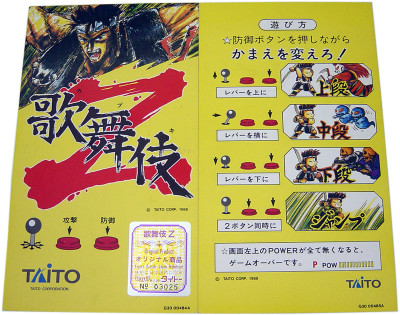 In the 80s, Taito produced a lot of popular coin-ops – mostly shoot-em-ups, puzzle and platform games. However, their beat-em-ups were not among their best. Kabuki Z is one of them. Developed by Kaneko of Gals Panic fame/infamy, it can best be described as a “hack-n-slash”. The intro sequence gives a good idea of the game’s content: a man commits seppuku, and behind him our samurai hero with his katana. The samurai chops his head off while the rice paper doors close, the resulting blood spurt splashing over them and forming the “Z” in the “Kabuki Z” title. Charming.

The game is a dark take on feudal Japan, not unlike Namco’s earlier Genpei Toumaden and its undead samurai. The bloody violence shown in the intro, while not reaching the levels of Splatterhouse (which appeared in arcades that same year), is a big component of the game itself. Mooks turn into blood splatters when the hero’s katana hits them, and the bosses are disposed of in gruesome ways when their energy drops to zero. The first one, a Shinobi-esque samurai in full armor, kneels and gets his head lopped off, the second one is reduced to a skeleton, a sub-boss gets covered in bumps and then implodes a la Fist of the North Star, and so on. The second half of stage two has lots of human remains on the floor and hanging bodies in the background. 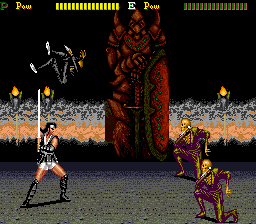 As for the controls – one button attacks and the other parries. Moving the joystick while holding the second button executes a high, medium or low parry. Pushing the two buttons at the same time makes the hero do a somersault that covers about one screen and a half, and there is exactly one point late in the game where jumping is mandatory. There are no special moves, no other weapons, no destructible environments, or two player simultaneous play, or a story, not even extra lives or high scores (you can enter your initials but it just shows which level you reached). Just long strips of terrain with enemies and a boss armed with cold weapons at the end. It’s all strangely minimalist, even for a game from 1988.

The various mooks are totally unthreatening and die in one hit, leaving behind items used to refill the energy bar before meeting bosses and sub-bosses. Here’s what the game is all about – dueling with the bosses, waiting for the right moment to strike and parry their blows until their defense drops again, rinse and repeat until one of the two gets defeated. Interestingly, the weapon of whoever is losing energy changes color according to their health, first flashing in pink and then becoming red. 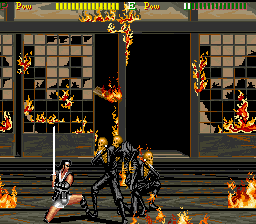 The duel aspect of the game could have been interesting if it were well implemented, but alas this was not the case. For example, parrying a blow or being hurt a few times in a row sometimes stuns the hero for a couple seconds, something that never seems to happen to the opponent. Also, their AI is inconsistent – sometimes it seems able to predict everything, when in other cases it gets fixated on jumping around, letting the guard open for attacks. The parry system also remains almost unused, because combat is too stiff and confusing to accurately predict the blows of the enemy. Usually the best strategy is just to hit and run.

You only have one life, and if you die, you have to redo the level again with your next credit. Have fun. To be fair the game is pretty short, so there’s not much else that could be done.

If you manage to survive, things take a turn for the weird from the third stage boss. You fight some sort of ogre that bursts open when defeated, releasing two kunoichi twins. After disposing of them, the samurai inexplicably becomes a barbarian warrior with sword and shield, and the next area is for some reason the checkered halls of a Western castle, swarming with morphing chess pieces, some of which are on fire (…what?). After having avoided a few falling chandeliers and destroyed some sort of gladiator hiding in a bigger chess piece, the barbarian confronts the painting of an armored knight with a lance that comes to life (the painting, that is). The next and last stage has an Arabian/Egyptian flavor to it, with mooks now able to parry hits; after having slaughtered the last enemy, a four-armed genie,. the game cuts right to the “Stuff” (hooray for Engrish) credits, not even bothering with a “Conglatulations!” or something. 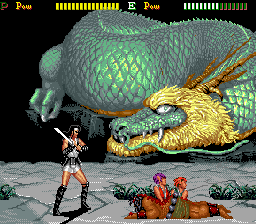 The graphics are decent for 1988, with big sprites and detailed backgrounds, like the the dragon at the end of the third stage (which also appears when you start the game, but whose purpose is never made clear). Too bad that the sprites are barely animated and seem to be slide on the ground: acceptable for the chess pieces, but looking stupid for everything else. It’s especially hilarious to see our hero sliding on his knee while crouching. The music is totally unremarkable and the various effects (cackles, grunts and yells) are very grating.

Kabuki Z is a strange, short, unforgiving title that feels unfinished and, besides the sub-boss of stage 1, hasn’t actually anything to do with kabuki. It was never released outside arcades in any form or shape by Taito, but some sources report that it was going to be ported on the Sega Mega Drive under the title “Tenkuu Retsuden Musashi”. 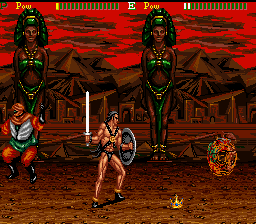 Curiously, the very same year Taito made another unusual coin-op brawler, Kuri Kinton, that consisted in a lone hero beating tons of mooks with one punch and then fighting with much tougher sub-bosses and bosses. While just an average game, it was much better than this baffling mess.