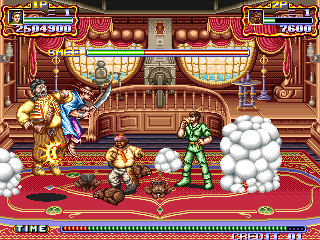 Hook is a 1991 fantasy film directed by Steven Spielberg, acting as a continuation to the original Peter Pan play/novel written in 1910s, although modern audience will likely be more familiar with its revised adaptations like the Disney animation. Featuring the grown up Peter Pan (Robin Williams) as a workaholic lawyer who left Neverland to start a family in San Francisco, he finds himself in hot water when Captain Hook (Dustin Hoffman) kidnaps his children to settle a score with his rival from past. With the help of Tinker Bell (Julia Roberts) and the Lost Boys, he must reclaim memories of his younger days to become the hero he once was. While considered a critical and financial disappointment, with Spielberg having shown disapproval in retrospective interviews, it performed extraordinarily well on cables, transcending to a childhood staple in the eyes of those who grew up in the ‘90s.

The film was translated into four different video games courtesy of Sony Imagesoft, a subsidiary of the Sony Group that held rights to assorted Hollywood blockbusters at the time (as a matter of fact, Hook was produced by Sony-owned TriStar Pictures). Two of these were platformers, each developed by the Japanese studio Ukiyotei (of Skyblazer fame) and the British company Ocean Software (of licensed rubbish infamy), while another one was a PC point-and-click adventure game by Shadow Software. Finally, there was also a beat-em-up exclusively developed for arcades. This one is odd in that, instead of subcontracting to high profile developers like Capcom or Konami, it was handled by Irem, whose portfolio was more known for shoot-em-ups than this particular genre, barring a few outputs like Kung Fu Master and Blade Master. 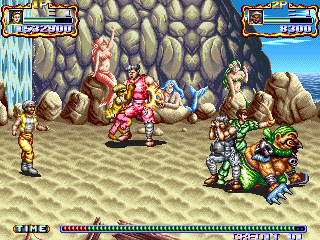 The arcade Hook loosely follows the exploits of the aging Peter Pan, as he fights his way through the regions of Neverland, joined by four Lost Boys: Rufio, Pockets, Ace, and Thud Butt. The controls are a bit complicated despite only requiring two buttons for attack and jump, but it becomes second nature once you get down with them. A repeated use of the attack button leads to striking your target until they fall to ground, but here, you can choose two different combos depending on whether you press it rapidly or slowly. On top of that, everyone gets two special moves, done by either tapping the joystick forward and hitting the attack button, or pressing both buttons just before you land from a jump (the timing for this is tricky, as you can accidentally perform the desperation move cast from your health). With wide range of specialty between the gang, there’s enough incentive to try them out without having to re-learn their moveset, although Peter Pan is the best character by and large.

Also unique to this game is an ability to pummel downed foes, a gameplay mechanic that dates back to 1986’s Renegade but is a rarity in Capcom style beat-em-ups. This helps giving it the edge over typical Final Fight clones, as it encourages the player to continue endless rushdown toward enemies, possibly finishing them off before they ever get a chance to fight back. Beware, however, that some enemies are able to counter it, so don’t forget to hit and run. 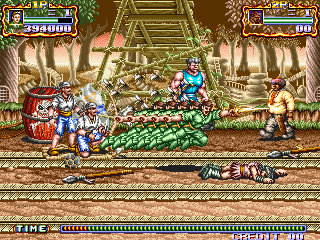 Outside of the gameplay, the general presentation is not very good. Technically, the pixel art lives up to Irem’s usual gold standard, and the levels are filled with interactive props that you can use for temporary crowd control. However, there’s not much graphical variety beyond cycling between ships, seashore, and harbors that blend into one another. Every stage is punctuated with a map of Neverland that indicates the course of your journey, with similar effect to Ghosts ‘n Goblins. Except here, instead of teasing the player with memorable nightmarish landscape, you just circle around some boring island, and it’s hard to get any excited about it. The same can be argued about the bad guys, whose only distinguishing trait is that they’re pirates. The enemy roster feels restricted, and the game repurposes the major bosses as regular mooks; given that they’re still just as cheap as before, they make up for the most frustrating moments in the game. Even Hook himself has to be dealt with multiple times, and his last encounter, where he constantly summons backup units while Smee is harassing you with cannon, is more annoying than it is climactic.

There’re some weird bits that don’t fit the source material, like when you’re suddenly teleported onto a glacier in the middle of a tropical land, where you come across a half naked old man who spams Hadoukens and falling icicles. And this is after you hatch baby crocodiles by throwing their eggs from catapults. Either this was cut from the movie, or Irem surely took some great liberty. Also, the artists must’ve had trouble getting Robin Williams’ look, as Peter Pan’s face wildly differs between mugshots, and his in-game sprites look too young, like he’s only a teenager. The title theme and the first stage’s music borrow the John Williams’ score from the movie, while most others are original to this game. Overall, they’re hardly noteworthy. 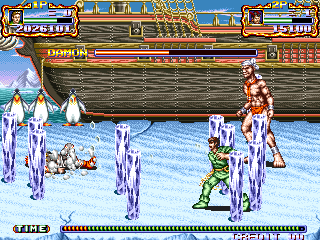 The Japanese version has some notable differences compared to the international release. Almost every part of the graphics has been re-colorized, generally using higher chroma and sometimes switching enemy’s shirt color. The biggest addition is the new Stage 3 boss, an Arabian swordwoman, replacing the Hook clones in the other versions.

In short, Irem’s Hook falls flat next to its competitors, both in terms of substance and creativity, but the fundamentals are solid enough to overlook its shortcomings. With brief length and 4-player support, it measures up to fine arcade experience. Most crucially, the Irem developers would recycle many ideas from this game to create more refined beat-em-ups, Undercover Cops and Ninja Baseball Bat Man, so it’s worth checking out if just to learn about where they evolved from. 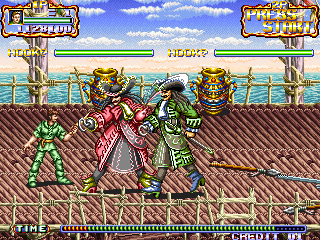 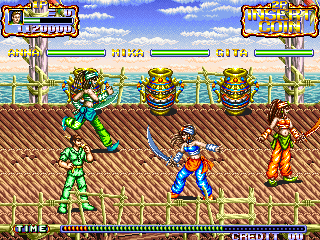