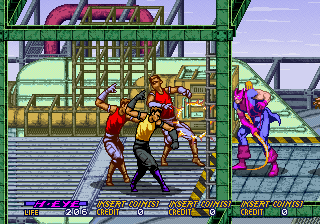 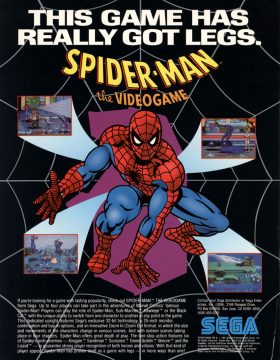 After Sega ended up getting the license to make Spider-Man games, they made a title for each of their major formats at the time. The Genesis and Master System got a platformer with some extra strategic elements, like being able to take pictures of super villains for extra cash. The Sega CD version took that concept and expanded on it, while adding some sub-par quality animation. The Spider-Man game that reached arcades, however, is an entirely different beast, and it’s probably the best game out of the lot.

Like an assortment of other games that filled arcades of the time, Spider-Man: The Videogame is a beat-em-up that can support up to four players. You’ve got the webhead himself, as well as master archer Hawkeye, lady thief Black Cat, and Namor the Sub-Mariner. The characters don’t differ all that much from each other, aside from a somewhat different special move and a projectile that’s used in one of the two major gameplay modes. The plot involves an artifact called the Sorcerer’s Stone that’s getting passed around Spider-Man’s rogues’ gallery, granting them extra strength. As you’d expect from a beat-em-up, there’s not a lot of importance in the story itself. 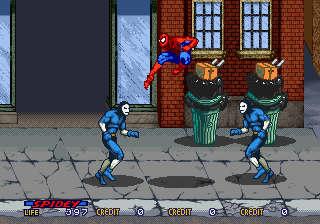 The game itself is split into two modes. One is a standard beat-em-up, where you walk forward and take out whatever goons and mooks happen to get in your way. The enemies you’ll face include fat bald guys, guys in suits, martial artists in tank tops, and masked henchmen who look like they just came out of an episode of Power Rangers. The gameplay for these sections will be fairly familiar if you’ve Konami’s licensed beat-em-ups, and you can generally results by just mashing the attack button as hard as you can. You’ve got a basic combo, a couple of different air attacks, a throw, and the requisite special move that drains your life. The combat is simple to the point of mindlessless, but there’s enough impact to the actual fighting that it’s still rather enjoyable.

At certain points, the camera will zoom out and give you more of a view of what’s on screen. When this happens, the game becomes a sidescroller, turning into something more like a simplified version of Shinobi. You fire off projectiles whenever you press the attack button in these sections, with Spider-Man shooting web balls, Black Cat throwing out her grappling hook, Hawkeye using arrows, and Namor getting the short end of a stick with a short-range lightning blast. Since he has to get closer to enemies to use his projectile than anybody else, this means he’s not the best choice for these sections. Much like Shinobi, you can also use a close-range attack on enemies if you get near them. These sections generally involve some platforming as well, including a few points where you’ll scale walls and ceilings in typical Spider-Man fashion. The sidescrolling parts are generally more enjoyable, most of the time, since you’re generally left never having to wait for the game to stop sending waves of foes at you. 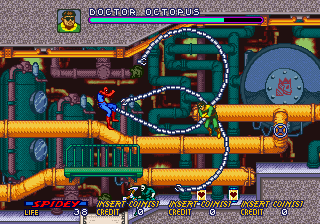 The difficulty’s pretty reasonable as far as arcade games go, with one exception. Your health is measured numerically, similar to  Atari’s Gauntlet, and much like that game, it’ll slowly drain over time. It happens slowly enough that you’ll probably never die to running out of health, but it’s still a bit annoying. The game’s nice enough to leave some health pickups behind every once in a while, although they’re not quite as common as the random street meat you’d find laying around in Final Fight. Unfortunately, given how often you get hit, it won’t prevent you from losing your credit for long. It’s also a pretty short game overall, with the game being comprised of a mere four stages.

What the game does especially well is providing an authentic comic book feeling, which really helps with the presentation. All of Spider-Man’s major foes like Venom, Doctor Octopus, and the Kingpin show up throughout the game, with Doctor Doom making an appearance as the penultimate battle. There are a few other nice touches adding to the comic book experience, as well, with characters throwing out taunts through speech balloons, along with plenty of onomatopoeia like “VOK” popping out whenever you land blows. The Game Over screen, depicting a beaten-up, confused looking Spider-Man over an incredibly goofy jingle, is also worth seeing for a laugh. The music is generally somewhat on the jazzier side, which is certainly a novelty amongst the game’s genre. There’s plenty of voice acting as well, and while it’s not typically great, it adds a lot to the colorful comic feel. 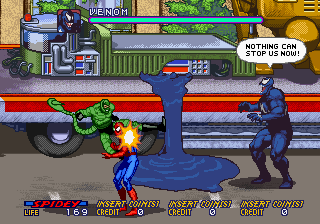 Overall, Spider-Man: The Videogame is more than worth seeking out, whether you find it in the wild or within the depths of MAME. Neither the beat-em-up sections or the sidescrolling sections really offer as much as a dedicated game of their kind, but together, they serve to make a fun game that offers plenty of variety. Sadly, the game was pretty much forgotten about after its release, with no hardware of the time truly able to give an accurate part. Instead, fans of the wallcrawler more than likely had to make do with Maximum Carnage. No justice.