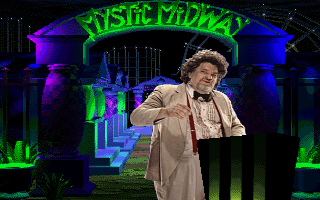 The CD-i, despite the best efforts of both its marketers and its developers, just wasn’t meant to be a games machine. It could play FMV and CD audio, certainly, and perhaps if Phillips had played to those strengths, the machine’s fortunes might have turned out differently. It would have made a fine alternative to a laserdisc player, and perhaps, if history had taken a different route, could have beaten DVD players to the punch. Time and time again, however, game creators used its underpowered hardware in a noble, if somewhat futile effort to compete with the more popular systems of its day. The Mystic Midway titles are two titles that managed to escape the confines of the CD-I, for whatever reason. To be truthful, they’ve aged about as well as a CD of spooky sound effects that sat in a microwave for just a little too long.

The main attraction of these two titles, so to speak, is live actor Randy Polk. Mr. Polk only made a handful of video game appearances between this and the Turbograpx-CD version of It Came From The Desert, but it’s clear they made just the right choice for the role.. In Mystic Midway, he takes the role of “Dr. Dearth”, a very obnoxious cross between a carnival barker and a lord of purgatory. It’s a little vague, but apparently he’s in charge of some kind of plane between heaven, hell, and Earth. He’s a little like the Crypt Keeper, given a few hundred extra pounds and with even worse puns.

This title fashions itself as a carnival shooting gallery, a subgenre done so many times that you can even find examples on the 2600. You control a gun emplacement at the bottom of the screen, which can be maneuvered back and forth to aim at the rows of targets above you. In each round, your goal is to reach a certain target score before running out of time and ammunition. Different targets are worth differing amounts of points, at the cost of being more difficult to hit. Should you reach the target score after your time or ammunition runs out, you’ll go to the next of 15 rounds. Fail to do this, and Dr. Dearth will insult you, and your game ends.

The problem is that once you get past the first handful of stages, scoring well becomes more and more of a matter of luck. The movements of the tombstones that block your shots start to become more unpredictable, meaning there’ll be plenty of shots entirely wasted. What’s also annoying is that some targets only stay on screen for a few moments before popping back down into the background. If you happen to land a solid hit on them just when they’re moving down, however, your shot won’t count at all. Since it’s more or less random how often these targets actually stay shootable, you’ll either have to be very lucky or hope you’ve got enough targets around that don’t have this problem.

That just leaves the presentation, and if you’re into cheese, this might actually make up for the subpar gameplay. There’s plenty of FMV of Dr. Dearth, offering backhanded compliments for clearing stages and insults for losing. He also has a few progressively less insulting speeches, depending on your final score, when you quit the game. During the game itself, there’s a variety of wacky sound effects for hitting the various targets, like the pirate skulls who say things like “Arr!” and “Avast!” when they’re shot.

Unfortunately, without that presentation, all you’ve got is a game that could have been done just as well, if not better, a decade before its release. It’s a simple game that doesn’t even do what it sets out to do especially well, and the only thing that really makes it special is its gratuitous FMV. The CD-I was capable of more than this, if not very much so, so it’s a shame that people were expected to pay full price for this.

The MS-DOS version was released a couple of years after the original version. It’s generally identical, aside from having having slightly worse FMV quality.