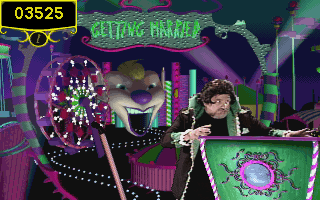 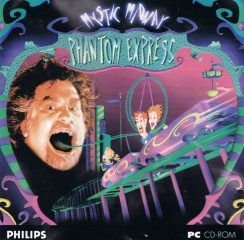 This time around, the theme is a roller coaster, split into seven stages, each one representing one part of your apparently terrible life. This boils down to literally following along a rail, shooting at targets in a black void, and occasionally watching a cutscene of roller coaster tracks. Each target is worth a different number of points, and it’s once again your goal to reach a certain target score before the end of the ride. The one real improvement since Rest in Pieces is that you now have three lives to clear the game. Unfortunately, the game’s so dull that it’s unlikely you’ll even play long enough to lose all three.

The entire game consists of moving your cursor around the screen, clicking on whatever targets pop into your view. Unfortunately, the hit detection is so off that the only way to reliably hit anything is to just wave your cursor in the general direction of the target, rapidly click the mouse button, and hope for the best. This repeats for about two minutes, or until you quit the game, whichever comes first. There’s no targets you’re supposed to avoid shooting, no enemies to shoot, no forks in the path, absolutely nothing that offers any sort of excitement. As simplistic as Rest In Pieces was, it actually required some kind of thought to achieve the scores you’d need to progress, none of which is required here.

This time around, however, it’s not just Dr. Dearth who’s there to add to just how generally unpleasant everything is. The targets you shoot include things like childhood bullies, angry bosses, and bottles of pills, a different set of potential targets for each stage. During the game, however, you’ll constantly hear voice clips of people yelling at you and insulting you, like your parents calling you an ugly child, police officers pulling you over for speeding, and your spouse turning you down for sex, among many others. In a mixed blessing, the sound the game makes when you fire a shot is so loud that it’s likely to drown out most of it, which at least means you don’t have to hear it.

Not that you won’t be seeing a lot of Mr. Polk again, however. This time, he takes on different outfits to announce each of the stages, and seeing him dressed as a decidedly female schoolteacher is a lovely sight that your eyes will in no way try to release themselves from your head from. While he overacts even harder than he did in the previous game, making a variety of fantastic facial expressions as he pulls the lever that sends you on your way, his constant string of insults eventually gets old. It mostly boils down to different ways of saying what a total loser you are, and how terribly each and every part of your life is going to be. Nothing like video games to escape from the drudges of reality.

Rest in Pieces might have been somewhat fun if it weren’t for its completely uneven difficulty curve, but this particular game has no enjoyment whatsoever. It’s a repetitive, dull, and overall completely joyless experience that not even jolly old Mr. Polk himself can make interesting. There have been bad games, certainly, but few so thoroughly unpleasant that they make you feel generally worse about living, by the time you’re through with them. There’s also the option for a two-player mode, should you have a captive on hand that you haven’t gotten around to interrogating yet.

Much like Rest in Pieces, the CD-I and MS-DOS versions of the game are mostly identical. Go ahead, though, just try playing this game without a mouse.

As for Randy Polk, he continued a modest film and TCV career, perhaps wisely choosing to put the world of video games behind him. Nowadays, he works as a professor at the University of Houston. Over on his social media, however, he still appreciates that people recognize him for this particular role. As well they should, because the man single-handedly redeemed a pair of awful games with style.