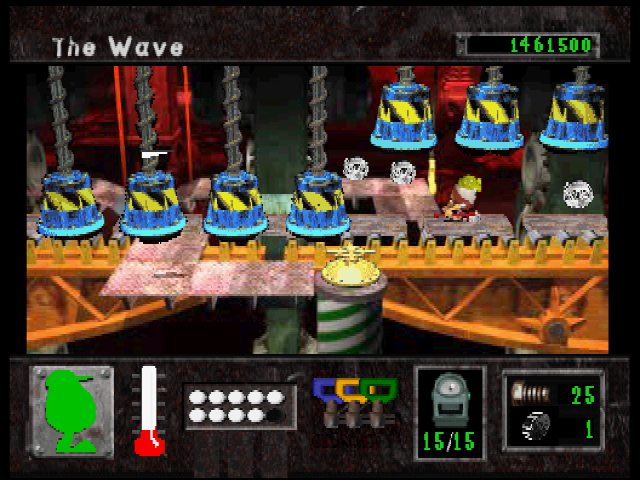 By the time it released in 1998, Eggs of Steel: Charlie’s Eggcellent Adventure (known as Hello Charlie!! in Japan) already felt like it was late to the party. 3D platforming had changed thanks to the massive success of games like Super Mario 64 and Crash Bandicoot. Eggs of Steel was an outlier on the PlayStation, offering an experience closer to something you would see on computers from the 1980s. It’s a long forgotten but interesting take on the genre that’s worth a look, even if only for its bizarre and surprisingly dark story.

Eggs of Steel was developed by Rhythm & Hues, a studio known for animation and movies rather than video game development. While the company is credited with cinematic and animation production on games such as Goldeneye: Rogue Agent and The Saboteur, Eggs of Steel was their only full-scale video game development effort. Enix Corporation provided bug testing, marketing, and the Japanese voice talent. 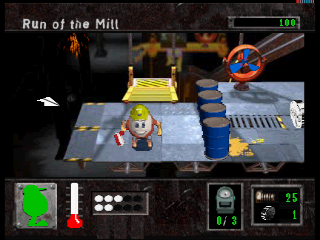 The game’s story begins with Charlie Takanite, a night watchman at the MOMSteel steel factory, goofing off and causing a major accident within the factory. In order to set things right, Charlie has to find four different keys needed to operate the reset box and shut down the factory. During his adventure, he is pursued by Blast Furnace Bill, another employee of the factory who wants him dead.

The game is divided into six levels, four of which have a hub area that leads into multiple smaller stages. The goal of each level is to hit all of the timeclocks at the end of these smaller stages. These smaller stages all have names (such as “Tunnel of Love” or “Amphitheatre of Doom”) that differentiate them and provide a bit of character. Since the entire game takes place within the MOMSteel factory, you’ll mostly be seeing dark factory walls and steel constructs. There is some occasional variety, such as levels that take place at the fiery bottom of the factory or on scaffoldings high up.

Charlie can swing his wrench, throw any bolts he finds for a ranged attack, jump, and crouch. His jump never quite feels 100% reliable due to its short arc and slow speed, but holding the direction you’re going in will generally keep you alive. The strangest move Charlie has is a roll that can be performed by crouching while running. Doing so causes Charlie to move extremely fast and make a constant “woo-woo-woo!” sound as if he was Curly from the Three Stooges and is a very effective way to get around and dodge attacks. 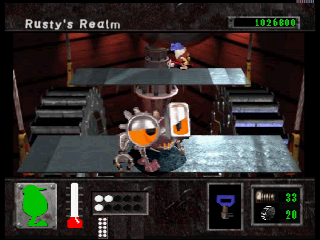 Stages in Eggs of Steel are divided into multiple single-screen rooms with a fixed camera. Since there’s no way to move the camera, moments in which it’s difficult to tell where objects are in relation to Charlie are commonplace, but you’re only able to fall if you miss a jump. Dying sets the player back at the beginning of the stage, but any progress made towards solving puzzles or damaging bosses is retained.

In addition to contending with killer robots and environmental hazards, the player will also need to manage Charlie’s temperature. A gauge on the screen shows how hot Charlie is currently feeling, and if that gauge fills, Charlie will instantly die. There are fans throughout every stage that allow Charlie to cool down, so it’s essential to find these as you go.

There’s a healthy amount of variance in the kinds of challenges presented to the player. The stage called “Slippin’ & Slidin’” has the player dodging falling girders as they stack on top of each other while Blast Furnace Bill sends fire their way. “Come Fry with Me” provides an interesting gimmick in which players press the appropriate face buttons on the controller to open and close furnace doors that serve as platforms. “See You Later, Escalator” is a platforming gauntlet involving a series of quickly descending platforms that take on the appearance of a giant escalator. 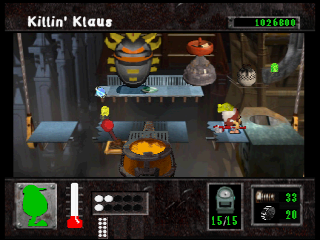 There are multiple boss fights in each level and they typically require the player to wait for an opening to hit, but there are a few more interesting examples in the game. For example, to defeat Killin’ Klaus, the player must operate a magnet to drop gas canisters in a cannon and launch them at the boss. The titular Eggs of Steel can’t be hurt at all, so the player needs to lure them to different parts of the arena and trap them before finding their way to the key that hides by their spawning point.

Throughout the levels, players can find coins (collecting 100 gives you an extra life), bolts, donuts that restore health and lunchboxes that contain extra lives. Occasionally, Charlie will get to pick up special items such as a golden wrench that increases his attack power or a titanium suit that prevents his temperature from increasing. There are also green coins that grant players access to the Donutopia bonus stage at the end of each level, in which you have to jump through the holes of giant donuts to collect items. The layout never changes, so collecting everything is easy and makes the idea fall flat despite its usefulness.

Eggs of Steel uses a combination of 3D sprites for the characters and detailed pre-rendered backgrounds, similar to Resident Evil. Animations for attacks and movement are competent enough at a distance, but when characters move quickly or are close to the screen, they sometimes become blurry and ugly messes. There are some exceptions to this, such as the way Blast Furnace Bill will appear right in front the screen and laugh at the player or when Rusty (a robot boss that Charlie encounters twice) extends his eyes very close to the screen while he looks around for Charlie. These animations are distinct and really add some personality to the characters. 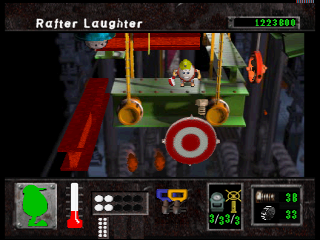 The soundtrack for the game is an eclectic mix of genres, including salsa, jazz, and surf rock. They’re generally catchy and easy on the ears, with the jaunty main theme being a real earworm you’ll hear many times throughout. The problem with the music is that it doesn’t actually fit the events of the game; it’s jarring to have upbeat or relaxing music play when Charlie is fighting for his life in a dangerous factory.

There are paper airplanes circling around in some rooms that will show a message upon contact. Usually, these messages contain hints on how to play the game (oftentimes written by Charlie’s lover, Tutty, in comically affectionate language) but sometimes they’ll contain additional information on Charlie and Bill’s past, providing the player with a means of piecing the story together themselves.

Aside from the paper airplanes, much of the game’s story is told through full motion videos (FMVs). Characters and environments depicted in them look very detailed and the animation really sells Charlie’s clumsy personality in particular. The voice acting is amateurish though, with Charlie mostly mumbling through his scenes. FMV is even used whenever Charlie falls off a stage, showing Charlie crack open like the egg he is. These FMVs are also used for non sequiturs, such as Blast Furnace Bill dancing before introducing a boss fight. While they’re charming at first, these sillier FMVs get repeated and the novelty wears thin.

As the player proceeds further into the game, the plot begins to reveal its true colors. It is revealed via paper airplane that Blast Furnace Bill was recently killed in a factory accident and that prior to his death, Bill warned the factory’s management that Charlie was unfit for the job. Another paper airplane shows how Charlie got his job by having connections to someone high up in the factory. Towards the end of the game, the player sees a flashback in which Charlie is goofing off on his first day and activates a crane that picks up Bill and drops him into the blast furnace, burning him to death. 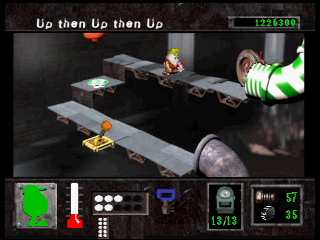 This revelation re-contextualizes the way Bill pursues you throughout the game, as it turns out Bill was actually a vengeful spirit the whole time. Even after Bill is defeated and the factory is stabilized, Charlie never once shows any remorse for his actions and is never reprimanded during the adventure. The sheer dissonance between the game’s desire to be a lighthearted, comedic platformer and the way it leads the player through a story of nepotism reigning supreme is truly a sight to behold. 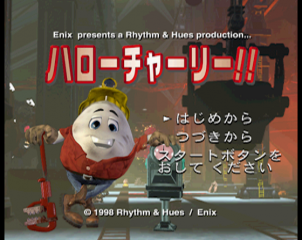