Exactly ten years later, Prehistoric Isle received an arcade sequel for the Neo Geo. It was developed by Saurus, who was previously known for their Shock Troopers run-and-gun series, and published by Yumekobo, who had previously worked on Pulstar and Blazing Star. Just like many sequels that happen several years after their predecessors, this game doesn’t have much to do with the original. For starters, there’s no island, and the dinosaurs are attacking a modern day city, so there isn’t much prehistoric stuff either. Only a couple of stages actually deal with the beasts attacking human settlements though, so it’s not even the Godzilla-esque experience the intro seemed to promise. The biplanes have been replaced by modern attack helicopters, which counts as a plus since shoot-em-ups, and video games in general, that feature choppers are still pretty rare. 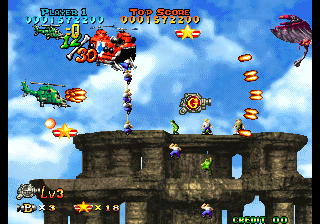 The only thing that this sequel seems to have in common with the earlier game is the presence of a shorter and more linear stage, that ends with an easy boss: the same yellow flying reptile that appeared at the beginning of the first stage, looking intimidating with its fire breath (that it never uses again) but being actually quite dumb and weak. In general, the game seems easier than the first, what with the more powerful weapons and more predictable enemy patterns. It also was turned into a very standard shoot-em-up, removing all the elements that made it stand out. The levels are much more linear and straight-forward. The developers got rid of the multi-purpose pod and replaced it with a more standard weaponry system based on icons that switch between two kinds of power up (straight/spread shot) a la Raiden. One can, though, keep the shoot button pressed and move the lever to change the shot’s orientation.

There’s now a secondary shot (various kinds of missiles) and smart bombs have also been added, even if they’re more like very powerful beams. The scoring system has been revamped as well: when the weapon’s level is already maxed out, picking another icon will start a score multiplier that lasts a while, letting players rack up huge amounts of points. Destroying swarms of enemies or big ones also releases star medals, which are counted at the end of a stage for yet another dose of points. A big score bonus is also given for completing a stage without dying.

Every now and then you will come across people that need to be rescued by picking them up and carrying them to the Blue Cross helicopters that show up. There are also sequences where the scrolling stops, the command “Defend people!” appears on screen and you have to let these people get on board of the rescue choppers without having them killed by the dinosaurs; in turn, some of the survivors will shower you with weapon, missile and bomb bonuses. 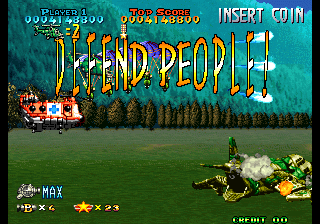 All the graphics are pre-rendered 3D turned into 2D sprites, which was common at the time but looks quite dated today, making all the vehicles and enemies seem like plastic action figures. (“The Computer Age Versus the Jurassic Age!”, proclaims the game’s flyer.) Among them there are a bipedal horned kaiju creature, turquoise sand worms, a fire-breathing dinosaur skeleton that could be a Joe & Mac reject and giant multi-eyed bugs that are yet another homage to the Ohmu from Studio Ghibli’s Nausicaa. To say nothing of the final boss: a squid-like alien monstrosity several screens long that wouldn’t be out of place at the end of a Darius game, but looks especially bizarre here. Don’t worry about another cruel game ending sequence, though… but simply because there’s no end to speak of, only the credits. 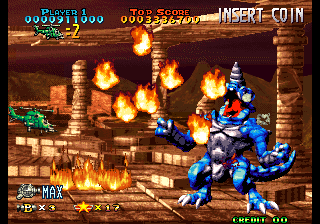 Prehistoric Isle 2 is a campy, goofy title: the booming, wannabe-epic score contrasts with the rainbow-colored reptiles that spit fire, beams, bubbles and energy rings, and the flying enemies that have crates (for power-ups) hanging from their beaks. The people speak with little wacky noises and balloons that say “HELP” in big colorful fonts and “OH NO!” when the helicopter that carries them get destroyed. Everything gives huge amounts of points as well. It’s a decent, if bizarre and repetitive, shooter on its own, but compared to Aicom/Yumekobo’s other shoot-em-ups, it feels pretty underwhelming. It was never ported anyone either, not even as a Virtual Console release, so it’s mostly remained forgotten.