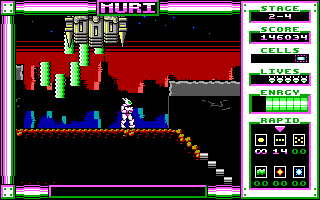 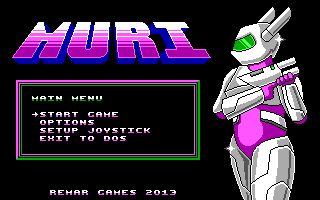 MURI is the first commercially released game by Remar Games, the same outfit that brought us Iji. MURI‘s actually a throwback of the sort that’s quite rare indeed: The age of early 90’s DOS gaming, where 16 colors and PC speaker blips came together in harmony with console style action. Specifically, MURI seems to be heavily inspired by the often forgotten original Duke Nukem, from the general gameplay mechanics to a very similar HUD. If you didn’t with these sorts of games, it might be harder to see the appeal. If you did, it’s an amazingly authentic experience to a particular part of gaming that never got quite the love it deserved.

The game is split into four “episodes”, each further detailing the quest of a woman in power armor to find out what caused the disappearance of humanity on Mars. Your general objective in every stage is to find the exit, although it won’t be all that often that you can walk straight there. Much like the Apogee games of old, most levels are fairly open, meaning you can wander around and look for secrets all you want before you make your way to the exit. There’s a lot of room for exploration, mostly in the form of ledges just out of your field of view, or blocks you can shoot to open up secret rooms. And don’t forget the floppy disks and joysticks that are laying around at random to boost your score. 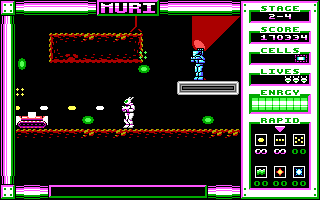 Of course, you’re going to run into plenty of stuff to shoot, mostly in the form of killer robots. There’s quite a few points where the screen gets loaded with enemies, and when they start firing off projectiles, the relatively small playfield can make things rather hectic. The game is pretty generous with special weapons, at least, which gives you things like rapid fire, bouncing lasers, and spread shots. The best weapons are usually hidden well, requiring thorough knowledge of all a level’s secrets or a hidden cell, which basically works like an episode-wide keycard. The special weapons aren’t too necessary unless you’re playing on a higher difficulty, however, which removes the health powerups entirely. Higher difficulties also add more patterns to the boss fight at the end of each episode, which is a nice touch.

MURI is a pretty short game, overall, and if you’re at least decent at the genre, it shouldn’t take you more than an hour or so to clear all 16 stages. It might take a little longer if you’re trying to completely clear the level of every enemy, secret, and pickup to achieve the maximum score, although that’s more for bragging rights, than anything else. In that way, it’s very much authentic to the games that spawned it, both from a gameplay perspective and visually. There’s a 16 color pallete, PC speaker sound effects, and even the option for good old fashioned chunky scrolling. If those words don’t make your eye twitch, you’re probably this game’s audience.