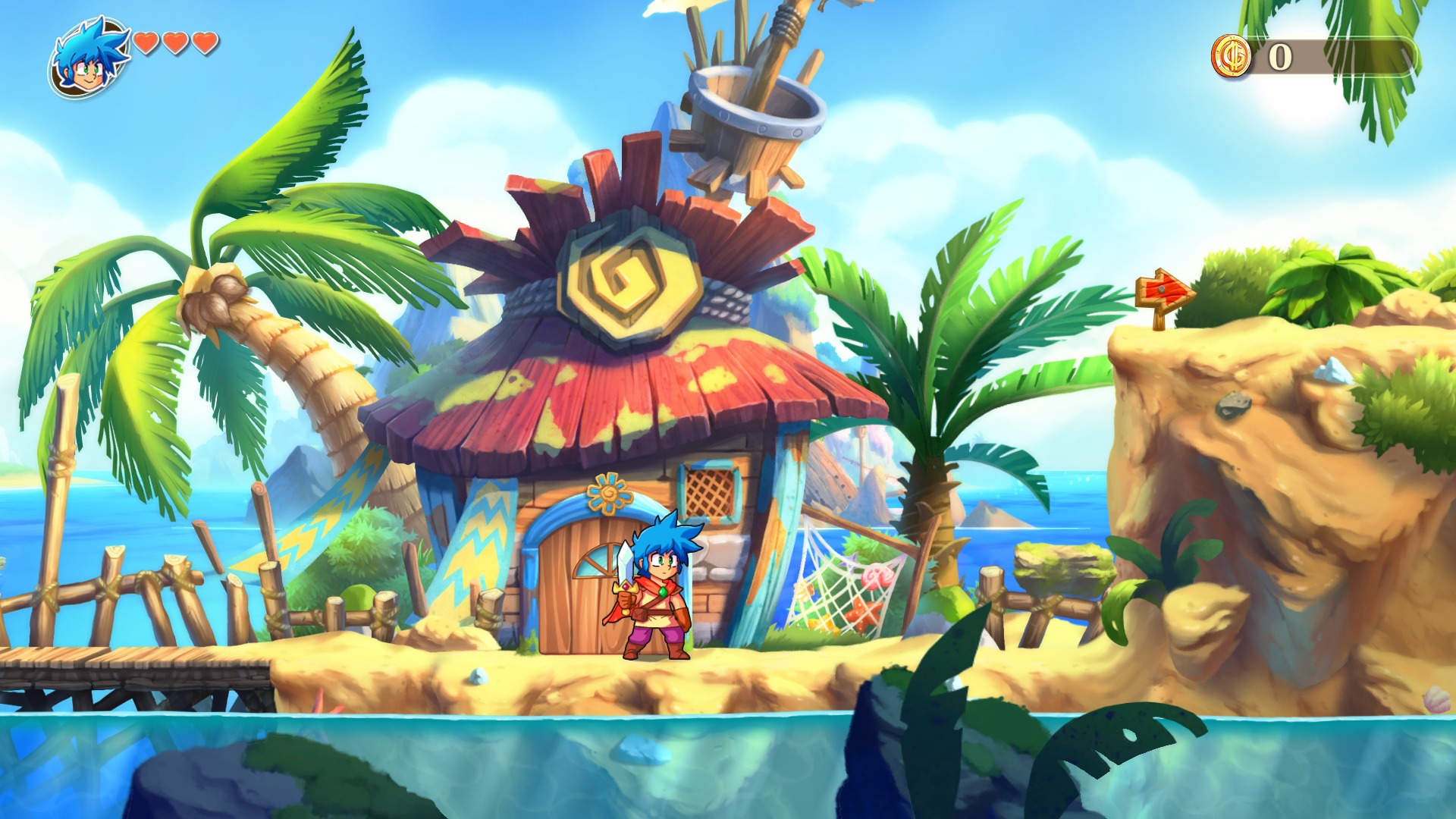 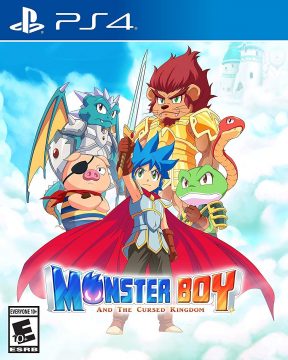 The title Monster Boy is a combination of Monster World and Wonder Boy, but in spite of the smashed together name, it’s definitely a proper sequel to the classic Sega/Westone games from the 80s and 90s. Both Sega and LAT, the company that owes Westone’s IPs, are on the title screen, and original designer Ryuichi Nishizawa consulted during its development, which makes it official. Even if that wasn’t the case, everything about Monster Boy not only perfectly emulates the look and style of the classic games, but improves and modernizes them in almost every conceivable way. 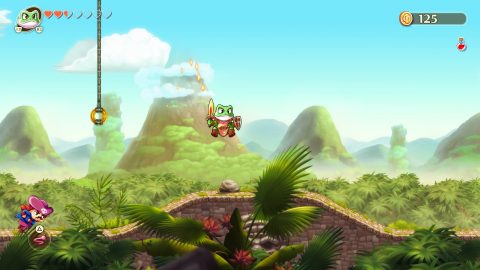 The game begins with a young boy named Jin, quietly fishing on the beach. Him and the entire village are soon turned into monsters thanks to his uncle Nabu, who has apparently gone mad drinking “Royal Nectar”. (The planned subtitle, “The Wizard of Booze”, makes it pretty clear what that’s supposed to be.) Jin sets off of an adventure to discover a set of orbs that will help break his curse, while also getting to the bottom of what’s happened to Nabu, who has become a wanted criminal with the local authorities.

Monster Boy was developed by Game Atelier, a French company who not only has a huge affection for Westone’s classic series, but is perfectly versed in its language, and understands how to play to its strengths. The Monster World games all had their own positives and negatives, so this game takes the best elements, and polishes and expands on them. 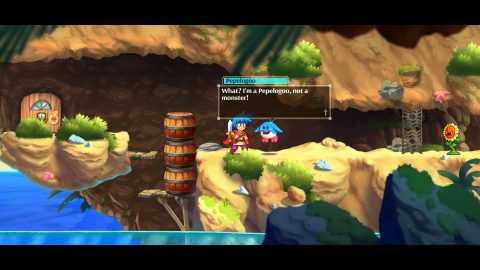 Like The Dragon’s Trap, the core of the game involves changing into different animal types, each with their own abilities. The pig form (based on the oddball shopkeepers / password givers from The Dragon’s Trap on the SMS) is a weak physical attacker, but wields magic spells, which include the usual tornado, boomerang, fireball, and lightning abilities, along with bombs. He can also sniff out hidden doors, which are typically indicated by transparent clouds. The snake can crawl along certain walls and ceilings, like the mouse from The Dragon’s Trap, but can also spit venom at a distance. The frog can not only swim but can also use his tongue to latch onto and swing from grappling hooks. The lion has a variety of dash abilities that not only make movement easier but lets you smash through bricks. And the dragon form can both breathe fire and fly through the air.

In The Dragon’s Trap, each area was designed specifically for each form – you could only change between them on demand with a hidden ability. Here, you’re constantly expected to switch forms to suit the task, sometimes even in the middle of a jump – for example, swinging on a few hooks with the frog then using the lion to dash upwards to reach a platform. The level design was one of the few weaknesses of The Dragon’s Trap, often just consisting of straightforward, enemy-laden hallways, but here the dungeons are filled with platforming puzzles, which recalls something like the classic The Legend of Zelda titles, if they were presented from a side-scrolling perspective. The puzzles themselves are rarely very difficult (and the few that might stump you just involve interpreting environmental clues), but actually pulling them off can be quite a bit more challenging. For example, you might need to move a block from one side of the room to the other, but the only method of moving it is by ramming into it, so you need to clear a path while still avoiding enemies. 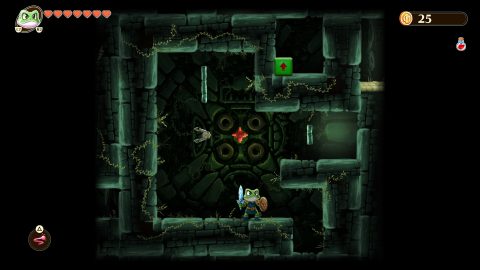 The enemy damage output is pretty high – even in the first area, you can only take two or three hits before getting killed. The “angel descending into heaven” scenes from the older games are gone, as you just fall over and then quickly respawn at a checkpoint, but that’s because you’ll probably end up dying a whole lot. This will probably be the case when overcoming the many platforming puzzles, which require quick timing and reflexes. Luckily, said checkpoints are regularly placed, rarely more than a few screens apart, so the end result is a game that’s demanding but never too frustrating.

The game’s equipment and stat system is a little closer to Wonder Boy in Monster World, in that there are only three stats (attack, defense, and speed), with only three levels. There’s still plenty of helmets, shields, and suits of armor to find, most of these which have various abilities either suitable for combat (reflecting projectiles, restoring health when taking damage, preventing status ailments) or are necessary for progression (like double jump boots and ice shoes that let you walk on lava). Each piece of equipment can also be enhanced by finding certain jewels hidden throughout the levels. There’s tons of other things to hunt for, too, including truffles, that expand the pig’s maximum number of magic spells, and music sheets, which are given back to a musician in town. This character is based on real-life musician Banjo Guy Ollie, who will play his own arrangements of six different Monster World tunes, providing you can find all of the sheets. 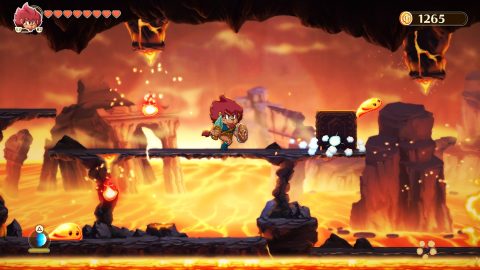 Many of the environments should feel familiar for Wonder Boy fans – the game opens up on a beach, and you’ll explore a jungle, an Aztec pyramid, a volcano, and a pirate ship. The second half of the game has a few other environments, including a graveyard and a haunted house. You also get to infiltrate a castle prison, as you sneak past an army of (somewhat easily fooled) penguin guards, one of the few cases of a stealth sequence that’s actually pretty fun. You meet a Pepelogoo pretty early on, and while he’s not a persistent presence like in Monster World IV, he does join in a couple of spots to help with some puzzles. One interlude changes into a side-scrolling shooter a la Wonder Boy III: Monster Lair, with a familiar fish enemy at the end.

It’s also a relatively gigantic game. The older Monster World titles were maybe five hour experiences, and their closest modern analogs, the Shantae series, aren’t much longer. But you can expect to spend somewhere in the area of 20 hours to beat Monster Boy, more if you want to search for all of the extra goodies and equipment. This is also the first game in the series where you get an in-game map, which also helpfully points out your destination.

The soundtrack is a collaboration between several well known Japanese composers, with contributions by Yuzo Koshiro (Streets of Rage, Etrian Odyssey), Michiru Yamane (Castlevania), Motoi Sakuraba (Star Ocean), Keiki Kobayashi (Ace Combat) and others. Several tunes of the soundtrack are arrangements of Shinichi Sakamoto’s tunes from the older games, primarily The Dragon’s Trap, but also draw from the rest of the games. The arrangements are universally fantastic, and the new tunes are excellent as well, some with styles reminiscent of classic 90s redbook soundtracks. The anime opening contains a somewhat cheesy vocal song, in both English and Japanese, but it’s both fun and appropriate. The visuals are a near flawless reimagining of what the 8/16-bit art would look like in HD. The sprites are colorful and full of personality, and the backgrounds are intricately detailed. There are plenty of weird shopkeepers too, including a sunglasses-wearing, Hawaiian shirt-clad shark. 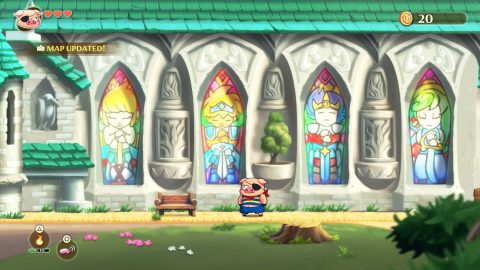 The developers’ love of Monster Boy really shines through, with the heroes from the older games being shown on stained glass windows on the local chapel, and their relics playing a pivotal role as well. But beyond the reverence paid to the story and characters of the old games, Game Atelier really understood what made these games work. For example, those bouncing arrows were always a lot of fun, so there are plenty of areas where you can boing all around the room. Structurally, it really gets it right – at the beginning of the game on the beach, you can technically explore the area beneath the water… though you can’t actually do much until you get the appropriate abilities, it offers a tantalizing preview of what you’ll eventually uncover. Plus, it also understands the pacing of the end-game – revisiting old areas using the lion’s dash or the dragon’s flight ability makes backtracking a breeze. Also, while there’s a mandatory quest near the end to assemble a piece of equipment, you’re only required to craft one piece. You’re also given clues on where to look, plus you’re able to obtain most of them earlier in the adventure if you were paying attention. This avoids the tedium in other scenarios, like the dreaded Triforce quest from The Legend of Zelda: Wind Waker. There’s a ton of hidden stuff too, though a few things are so obscure they’re nearly impossible to solve without a guide.

Monster Boy is a particular rarity in that it’s not only a pitch-perfect reboot of a long dormant property, but it’s also an exemplary game in its own right, easily ranking highly next to other big name Metroidvanias like Super Metroid and Castlevania: Symphony of the Night. And with the popularity of the genre among indie developers as of the 2010s, that’s a tremendous compliment.

DISCLAIMER: The author of piece and editor of HG101, Kurt Kalata, is credited under “Special Thanks” in the credits for Monster Boy. In full disclosure, he was in communication with Game Atelier to help promote the Flying Hamster 2 Kickstarter (see the opposite page), and then introduced the team to Wonder Boy creator Ryuichi Nishizawa, who gave the project his blessing, and which began the steps to the game becoming a true Monster World game. He has no financial stake in the game, other than receiving complimentary digital copies (though he bought the PS4 retail release anyway). 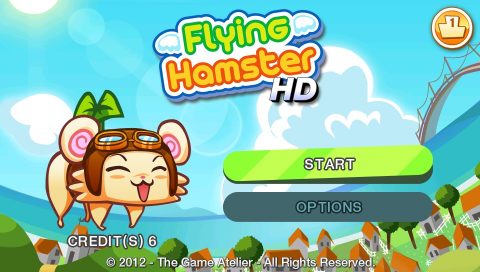 Game Atelier’s first game was Flying Hamster, a mobile shoot-em-up starring an adorable rodent named Newton. The main gimmick is that there are over 30 weapons, typically things from the environment, that are used as weapons. Apples, eggs, mugs of beer, and all kinds of things can be consumed and then spit back to attack the legion of cutesy foes. There are also two kinds of attacks – a standard rapid fire barrage, and a charge attack. The amount of ammo you get per pickup is pretty small, so it’s easy to (literally) chew through them and end up back with your default attack, but items are found regularly, and even respawn in boss battles to ensure you’re never too underpowered. 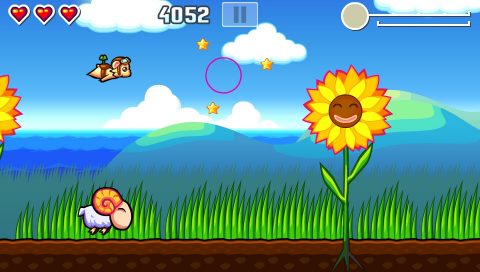 The game does have a euroshmup feel, with fairly straightforward level designs populated by waves of enemies. It gets by on its utterly charming visuals, as Newton takes on a variety of silly enemies in assorted locales, ranging from forests to jungles to the streets of Japan, where you even fight a mouse modeled after celebrity Hard Gay.

It’s a little simple, since it was originally designed for the touch controls of mobile phone platforms, but it’s well designed, and the high resolution visuals sparkle. For those who’d prefer regular controls, it was later ported to both the PlayStation Portable and PlayStation Vita, with the latter offering crisper graphics. 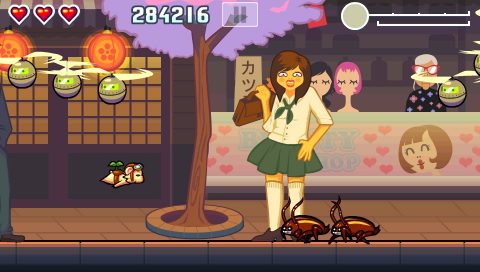 Monster Boy was originally conceived in 2014 as Flying Hamster II: Knight of the Golden Seed (below) though it was always meant to be an homage to the Wonder Boy/Monster World series. Despite the genre shift, it was also mimicking the same way in which the original Wonder Boy was an arcade-style platformer, and then the sequel shifted more towards RPG territory. The crowdfunding campaign attracted the attention of publisher FDG Entertainment, who funded the game over the next four years. During that time, they were also able to obtain the Monster World license, including its characters and music, giving it an extra layer of authenticity. It also allowed for visuals that improved substantially over its development.