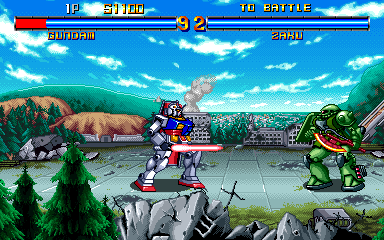 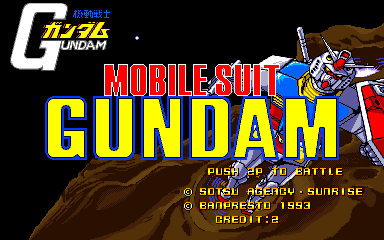 In 1979, Yoshiyuki Tomino changed everything. Before 1979, mecha anime consisted almost entirely of “super robot” shows, shows where robotic characters fought giant, alien monsters, or other robots. These shows were typically standard TV fare not much different from American cartoons. They didn’t take themselves very seriously, and the content was often campy. But in 1979, Yoshiyuki Tomino, one of the writers for Astro Boy, directed his seventh and most famous anime series, Kidō Senshi (Mobile Suit) Gundam.

Gundam was different from other mecha genres in almost every way. Rather than a situational series about aliens attacking earth, Gundam was the chronicle of two nations at war with each other. The focus is taken away from the robots, which are merely seen as weapons, and placed on the idea of war itself, and the characters caught inside it. The robots were piloted by normal human beings with their own ideals and beliefs, human beings that could think, feel, and most importantly of all, die. Gundam was the first real war chronicle in anime, and one of the first on television, period.

Because of its unprecedented levels of realism, drama, and profoundness, Gundam had an impact on anime like no other show did before, or after. In essence, Gundam is to anime what Star Wars is to motion pictures, and quite fitting as they were both in development around the same time. It is a mega-franchise that has persisted, never quite falling out of popularity with the masses, and spawning many universes to expand upon the ideas it introduced. 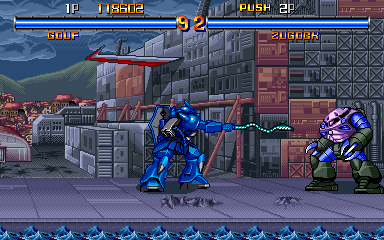 Of course, in light of Gundam‘s immense popularity, and its mobile suits being an excellent source of merchandising, Bandai has always been there to capitalize on the success of the franchise. The Gundam brand has grossed many times more with its model kits than it has with its actual shows and films, and by 80s, with the video game revolution in full swing, Bandai was quick to act, releasing several MSX games, and later several console games like Mobile Suit Z-Gundam: Hot Scramble.

The Gundam video games have always followed the flow of what’s currently popular in video games, and in 1993, fighters were it. This is when Gundam entered the fighting genre, and has continued to do so ever since, releasing a swarm of extremely varied games.

The first 2D Gundam fighter, developed by a company called Allumer, is based on the original 1979 Gundam saga, a chronicle of the One Year War between the Earth Federation and the Principality of Zeon, the government running the dozens of space colonies in Lagrangian orbit around the earth. Zeon has declared its independence from the Earth Federation and has begun attacking all of its territories, including the peaceful colony known as Side-7, with its superior technology. Most notably, its highly efficient, humanoid vehicles known as mobile suits. Side-7 holds a dark secret however. It is the birthplace of a new weapon being developed by the Earth Federation, a weapon so powerful that it could possibly end the war: the Gundam, and the only person capable of piloting it is a young, reluctant teen named Amuro Ray, who has a special gift that allows him to pilot mobile suits with greater efficiency than any normal human.

Amuro Ray is one of the most iconic heroes in anime history, and his machine, the legendary Gundam, is even more iconic. The Gundam went through many previous design phases. The first design became the Guncannon. The second design was similar to the first but had extremely high shoulder blades and bulkier design. This design would eventually be modified and used for Tomino’s next anime, the apocalyptic Space Runaway Ideon.

Char Aznable is arguably the most iconic anime character in history. He’s idolized and quoted in Japan in much the same way people in America idolize and quote Darth Vader. Known as the infamous Red Comet, Char remains Amuro’s rival from the One Year War until last Neo Zeon War 14 years later. He believes that Newtypes are the next evolutionary step for mankind, and that they should inherit the universe.

Gaia is one of the Black Tri-Stars, an elite trio of highly trained and violent pilots. He pilots the Dom, which is modelled after a samurai warrior.

The Zaku is the premiere stormtrooper of the Zeon army, and the first mobile suit to be used for combat. Throughout the franchise, it has remained almost as iconic as the Gundams themselves.

Sayla is a civilian who also happens to be a Newtype. She ends up as Amuro’s partner, and also pilots a Gundam here. One of the only characters to be dumped in the second Gundam arcade fighting game.

Ramba Ral is one of the more tragic characters in the One Year War. He’s an honorable and highly skilled pilot who under different circumstances, could’ve been a good friend to Amuro. The Gouf is a highly advanced rebuild of the Zaku, with an electrified whip, the prototype of the heat rod used by the Epyon and Tallgeese in future Gundam sagas.

The Z’gok is an amphibious mobile suit, here helmed by a faceless pilot.

The Gelgoog uses a dual-edged beam glaive, and is also piloted by some random guy. 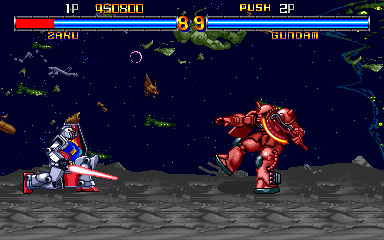 This was the first true Gundam fighting game, and one of the only games in the entire franchise not made by Bandai, but rather, their good friends at Banpresto (which was eventually bought out by Bandai very recently). Sadly, this is not one of Banpresto’s better works. It’s actually a fairly poor fighting game.

Part of this stems from the fact that the original Gundam saga alone just doesn’t have the makings for a good fighting game. Its roster is far too restrictive and limited to some pretty silly suit designs. After all, the original Gundam saga only had one Gundam, and throughout the Gundam fighting game franchise, the Gundams have been the only really good characters. This game is also inexcusably ugly. By 1993, arcade games were starting to look pretty sharp. This game harkens back to the mid-80s, with its hideous colors and jumpy sprite animation. Even the font seems ripped right out of Street Fighter II.