A vastly popular manga and anime in mid-90s Japan, Yu Yu Hakusho began life as the story of a deceased teenage delinquent, helping the living in spirit form in hopes of earning another chance at life. Before long, it repositioned itself as an over-the-top, Dragon Ball Z-influenced fighting manga, while retaining the supernatural elements that set it apart; Yusuke Uramechi, back among the living, now served as a Spirit Detective, taking on the demons who broke the laws of the Spirit World and caused trouble in the human plane.

Three friends join him on his adventures: there is Kuwabara, his schoolmate and former rival, who would constantly fight him – and lose – in his attempts to become the number one delinquent in school; Kurama, a millennia-old fox-demon who has ended up in human form and developed a gentle nature, and Hiei, also of the Demon World, a stand-offish Vegeta figure who hides a tragic past. Drawn-out battles, training montages and tournaments ensue. 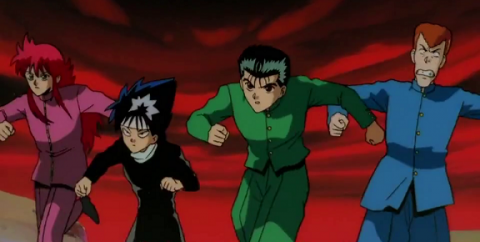 From left to right: Kurama, Hiei, Yusuke and Kuwabara.

In 1994, at the peak of its popularity, Yu Yu Hakusho came to an abrupt halt, the Three Kings saga rushed to an early ending. The author, Yoshihiro Togashi, had burned out. His health and interest in his work had been deteriorating for the past few years; he slept poorly, worked too many hours, and had come to dread drawing manga. YYH was over for good, and it would be years before he’d try his hand at another weekly serial. At 19 volumes and 4 seasons, the series ran considerably shorter than the likes of Naruto or One Piece, which helps explain why it didn’t grow to the same level of lasting popularity. Consequently, most of the games released for it came out in 1993 and 1994, while the anime first aired in Japan.

In 2001, Funimation brought the series to North America, where it also had some success. Atari / Infogrames, then in the habit of snatching up the rights to anime licenses for Western markets, would publish three more games in 2003 and 2004, perhaps inspiring the brief revival that followed shortly after in Japan. Out of the 24 games in the franchise, only the three Atari games – among the very worst of the lot – would ever see a Western release. 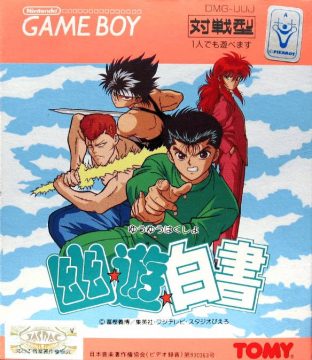 The self-titled franchise debut is a simplified VS fighter published by Tomy. Each character has exactly one special move, limited to three uses, which is executed by holding down the B button to charge up a gauge then releasing it. This leaves only a few combinations of the A button and the D-pad for every other move. The setup is somewhat similar to ’80s genre pioneer Karate Champ, though the fact that you have to chase your foe around a relatively large arena while slowly whittling down their health rather than simply scoring a few points per match mean it has time to get a lot more repetitive. Thankfully, there is only one round per fight.

The game’s story mode is divided into two short episodes, dealing with Master Genkai’s tournament to find a successor and the battle with the four Saint Beasts, respectively. In the first, you can only play as Yusuke or Kuwabara, while the second adds Hiei and Kurama, in concordance with the source material. Rather than recuperate after each battle, each character starts with a few items, such as an extra life or a SP refill that allows you to use your Special three more times, and there are two points in each episode where you can gain extra items through luck-based mini-games. Once all playable characters are defeated, it’s game over. There’s also an arcade mode where you can play against the CPU or another human via Link cable, but it still limits you to the same four playable characters. Probably the worst fighter based on the series. 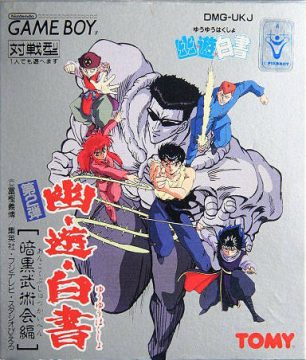 Though released just six months later, Dai ni Tama is a massive improvement, and one of the better fighters on the classic Game Boy. There are now 14 playable characters in arcade mode, separate buttons for punches and kicks, Street Fighter 2-style special moves, and throws. The story mode revolves around the Dark Tournament this time, easily the most popular arc for Yu Yu game adaptations. As the battles take place in a regulated setting, you can be disqualified if you stay off the ring for too long, similar to a wrestling game. The mini-games are more fun too, letting you control the spirit guide Botan as she tries to catch extra lives and other goodies Koenma throws down from a cloud.

The third entry in the Game Boy quadrilogy is a huge departure, replacing the one-on-one fighting with a RPG / beat-’em-up / platformer hybrid. In this retelling of the Sensui saga, you get to walk around a top-down city and talk to NPCs, until you enter a building, where it switches to a side-view. A attacks, while B jumps; pressing both together launches Yusuke’s Spirit Gun attack (and later, other moves), at the cost of some his SP.

The first level, a high school, is all straightforward, single-plane beat-’em-up action, while the second introduces platforming sections in addition to the fighting. You level up as you defeat enemies, but grinding isn’t strictly necessary. The action is fast and responsive, though the boss battles get a little messy. There aren’t a ton of beat-’em-ups for the Game Boy, and this is actually a pretty good one, on top of being a decent platformer and a RPG; it would make a great candidate for a fan translation.

The Game Boy series comes to a close with a return to its fighting game roots. The engine is similar to the second game’s, with more special moves and the addition of some advanced defensive techniques; for example, you can now deflect projectiles by pressing A + B right after blocking them. There is also a new, shared Special gauge. At the beginning of a fight, a circle is set in the middle; every time a fighter’s attacks land, the circle moves towards their side. When it reaches either end, the corresponding fighter gets to perform a unique, high-powered move. The CPU is much, much stronger this time around, and even the very first opponent you encounter blocks and counters nearly everything you throw at him. Even SNK’s fighters had the decency to wait until the second guy before they got tough. The roster is a bit smaller than before, with just 10 playable characters, but that may be just because there aren’t as many relevant fighters in the Makai Unification Tournament that concludes Yu Yu Hakusho’s story.

In addition to the Story and Arcade modes, there’s the brand-new “Girls Battle Mode”, where four of the non-fighting female characters from the series, including Botan and Yusuke’s love interest Keiko, get to wallop each other with bats and paddles. Their moveset is limited to only blocking and attacking, and the goal is to hit the opponent 8 times. 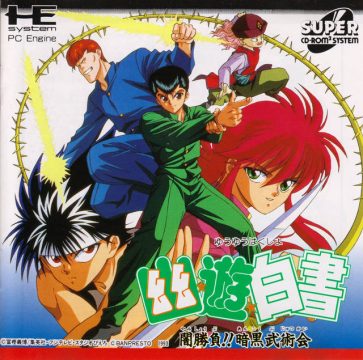 The only Hakusho title to come out on a NEC console is also the strangest, attempting to translate one-on-one shonen-style duels into a rail shooter. You move a target around, firing balls of spiritual energy at your opponent as he runs around in front of you while also trying to shoot off his own projectiles. It’s more or less like playing through a series of lightgun game boss fights with a standard controller. In addition to the regular attacks, which can be charged for a more powerful blow, each character has a special attack, initially limited to 3 uses per fight. After each victory, you get to attribute a few points towards increasing your total HP, attack speed or special attack uses. Though there are 11 battles in all, you only get to play as the five members of the Urameshi team (including Genkai), which doesn’t make too much of a difference as the game is seen from a first-person perspective and they mostly play the same. 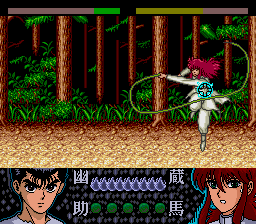 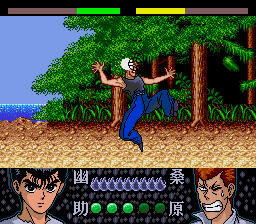 Plot-wise, it takes place towards the end of the Dark Tournament; as Team Urameshi is about to face off with Team Toguro, they gather in the forest to train, along with new allies Chu and Jin. Thus most of the game actually consists of sparring matches in terms of the game’s story, with only the last three opponents being hostile (Bui, for some reason, is nowhere to be found). The graphics are nice, consisting of the elaborate, partially-animated pixel art typically found in PC Engine CD cutscenes, and the music isn’t bad, but there’s just not much to the game. 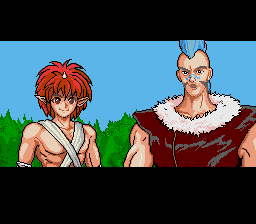 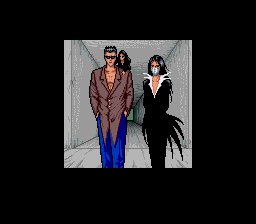