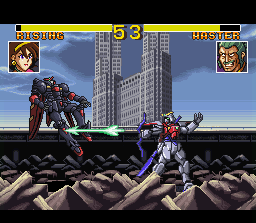 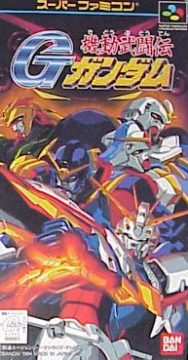 Kidou Butoden G-Gundam was the first console Gundam fighting game and that makes perfect sense because in essence, the entire G Gundam franchise was designed around the “world warrior” themed fighting games that were running rampant during the early 90s. The show was the first of the many “alternate universes” that were spawned after the conclusion of the Universal Century franchises, and was heavily scrutinized for its often boring, battle-themed plot, almost Pokemon-esque emphasis on techniques and its over-the-top, highly stereotypical and sometimes downright offensive character designs (i.e. Gundam Mexico is known as the “Tequila Gundam”, wears a poncho and a sombrero, Gundam Maxter is an assemblage of American sports and western archetypes, etc.). If you don’t take the show too seriously, it’s pretty funny, but it’d be a lot funnier if the show didn’t only stereotype other countries besides Japan. Where’s the Businessman Gundam who fights with a briefcase and tries to steal the other Gundams’ panties, or the Schoolgirl Gundam that constantly giggles and eventually gets assaulted by Tentacle Gundam?

Ah well. That said, G-Gundam is exactly what you’d expect from your average fighting game of the mid-90s. Nothing special, just another cash in on the Street Fighter phenomenon. The game is played out in tournament style, with varying numbers of characters to choose from depending on which mode you select. Story mode only allows you to play as the star Gundams from the show:

Domon Kasshu from Japan is the protagonist of G Gundam. Trained by the legendary martial artist, Master Asia, Domon sets out to find his evil brother, Kyoji, who is responsible for the death of their mother and the imprisonment of their father. You’ll be shocked to find that this Gundam doesn’t quite play like Ryu or Ken from Street Fighter, and it’s by far the most powerful of the story mode Gundams. It has a special move using its beam saber that’ll lop off nearly 1/3rd of an enemy’s health. Later gets replaced by God Gundam.

God Gundam plays nothing like Shining Gundam with the exception of one move. This one plays more like Ryu/Ken, with your quintessential dragon punch move. Despite being the ultimate Gundam from the series, I’ve actually found Shining Gundam to be far more effective.

Chibodee is a tenacious, over-the-top American Gundam pilot who has his ego severely injured when he loses to Domon Kasshu. After that, Chibodee tags along with Domon and they form a bit of a running rivalry. Chibodee fittingly despises French Gundam pilot, George De Sand. Another fairly powerful Gundam. It plays like a boxer type character, like Balrog/M. Bison, but without the charge motions.

George is the honor-obsessed, somewhat arrogant Gundam pilot of Neo-France. Like Chibodee, he gets wrapped up in Domon’s quest to find his brother. He maintains a bitter rivalry with Chibodee Crocket, whose attitude he finds distasteful. The Gundam Rose is obviously modeled after Napoleon- it looks light and fast, but it’s actually one of the slowest Gundams in the game. It has excellent reach and packs a wallop, though. Also has a throw glitch that classifies it as broken.

Argo is a space pirate hailing from Neo-Russia, where he is known as an infamous criminal. He eventually crosses paths with Domon Kasshu. Argo is impressed with Domon’s skills, but nonetheless attempts to take him down. The Bolt Gundam is the Zangief of the bunch. Fights with a ball and chain and has a very obnoxious rush attack that’ll put you in the corner.

Sai is the son of a famous martial artist in Neo-China. As with just about everyone else, he eventually meets Domon Kasshu in combat. Each of his matches with Domon ends in a draw and they eventually decide to go their separate ways. The Dragon Gundam is sort of the precursor to the Shenlong in the Gundam W franchise. Has similar “Dragon Fang” arms that extend out and shoot flames, making him sort’ve like the Dhalsim of the bunch.

Piloted by Rain Mikamura, also of Japan. This Gundam belongs to Domon’s girlfriend and fights with a naginata and a bow & arrow. Not much else to say.

This Gundam is piloted by Schwarz from Germany. Sort’ve like a cross between a Nazi and a ninja. Has a devastating Izuna Drop attack.

Master Asia was once Domon’s master. Aside from teaching Domon everything he knows, Master Asia has also saved him on more than one occasion. This is like a dark counterpart to God Gundam, with a really annoying beam rope attack. 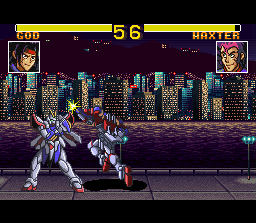 G-Gundam is a solid-enough Street Fighter clone, but it doesn’t really do anything to establish itself. The fighting system is a bit clunky and the collision is just weird. It’s almost impossible to do combos. There’s also “super moves” you can perform when you’re low on health, but these have extremely obnoxious command motions. A shining example of how little attention was paid to this title is the aforementioned throw glitch with Gundam Rose. If you get in close to an opponent and throw them, you can throw them again while they’re still in their recovery phase, before they get a chance to attack, and repeat this until they’re dead. You can do this to every enemy, even the last boss, and get away with it without a scratch.

Graphically, it looks decent for an SNES fighting game, but the animations are a bit stiff and some of the background elements, like the fog in Dragon Gundam’s stage, can really bog the game down. The sound effects are really weird and sound more like human collisions than giant robots. On the other hand, some of the music is somewhat catchy, but nothing particularly memorable. All said, G-Gundam is a somewhat mediocre game based off of a somewhat mediocre show, and isn’t really worth tracking down in cart form unless you’re a collector.