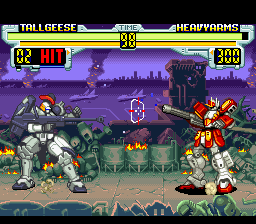 Shin Kidou Senki Gundam Wing: Endless Duel was published by Bandai in 1996 and released for the Super Famicom in Japan. From here on in, the Gundam 2D fighting games were designed by Natsume, known for a number of excellent 8-bit titles, as well as calmer fare like Harvest Moon. The anime takes place in a alternate timeline from most of Gundam, In the future man has colonized space. The Alliance rules the space colonies with a dictatorship, and it’s colonies wish for peace. The movement for peace is led by a pacifist named Heero Yuy, who is the namesake for this game’s hero. Heero Yuy is shot dead prompting the scientists who built a mech named Tallgeese, to turn rouge, training five mech pilots to get revenge against the Alliance. The series follows their exploits, whereas the fighting game just has awesome looking mechs beating the hell out of each other. In other words, it’s perfectly suited for gamers who don’t care about mecha anime but do happen to like 2D fighters. 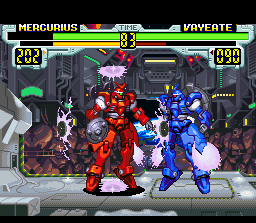 Much like G-Gundam, Endless Duel takes after Capcom fighting games, but does thing much better than its predecessor. It’s basically Street Fighter Alpha clone which has elements of Capcom’s Vs. series and maybe even a little Darkstalkers. Even though it doesn’t really do much that has not been done elsewhere, it is not simply a inferior clone, like Visco’s Breakers.

The fighting is what you’d expect from a Capcom style fighter. There is dashing, air blocking, air dashing (performed by tapping two attack buttons at the same time), lots of comboing, and juggling. There are a handful of differences, however. For instance, Endless Duel allows double air dashing, or a “vernier”, a move which makes your mech float downward temporarily,after a air dash by holding down, or forward, or back. It is also possible to attack a opponent while they are on the ground, which is rare in 2D fighters. Its juggle combo system is more or less limitless and this, combined with extensive air dashing, allows for extensive air combos. It is generally among the more aerial combat based fighters ever made and has a very high playing field, extending about one and a half screens high. 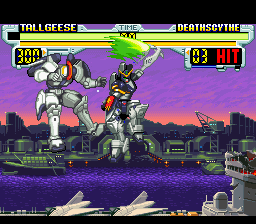 A very interesting game play element never seen in any other fighter are “vulcans”. These are projectiles that every character other than Epyon has, which do very little damage but can be done by tapping a punch button whenever a cross-hair appears in front of your character. They will only go as far as that cross-hair, however. It also has a “power meter”, which is depleted by supers or level two specials. Level one specials are performed with Y and B. Level two specials are performed with A and X. A level two special with deplete 100 points from your power meter and a super will deplete 200 points from your power meter. Your meter can be replenished my blocking hits, or executing specials or supers, or landing hits against your opponent or having your attacks blocked.

There are nice details, in the audio design, like the noise of the mech’s joints when they move or the mechs slamming on the ground when they land. The music during the game’s intro is a synthesized version of the anime’s second opening theme, “Rhythm Emotion” by Two-Mix. All in all it is pretty energetic, well applied stuff that is appropriate for this game.

The game has a cast of nine playable characters in one player mode, and a boss character playable with a cheat code in the other two modes.

Heero is a mysterious youth who has been trained to be an emotionless, ruthless killer on top of being highly trained in the art of combat and espionage. Sent to Earth by the Colonies as part of a large scale coup called Operation Meteor, of which Heero was one of five Gundam pilots who were to destroy the Alliance federation which had nearly taken control of the entire Earth Sphere. Only this mech and Wing Zero have two supers, with every other mech having one.

Duo is a fiery, optimistic, yet deceptively lethal Gundam pilot who also goes by the name of “The God of Death”. Early in the Operation Meteor mission, Duo meets Heero, and they form a sort of complicated friendship by working together. Despite his goofball attitude, Duo is as professional as they come.. His Gundam, Deathscythe, is pretty badass, and attacks with a giant beam scythe.

Trowa Barton is a mysterious figure with no real past. He remembers nothing but war and death. Initially, Trowa was just a mechanic working on the Heavyarms suit owned by the real Trowa Barton. The real Trowa was killed, so this mysterious pilot took the Heavyarms for himself, along with Trowa’s name. He attacks with a variety of weapons in the game, and many of his attacks are projectile based. He also has a lower jump than other characters and probably has the worst air game.

Quatre is the son of a wealthy material miner. He is also the leader of the Maganic Corps, his own private army. Quatre is not a violent person and doesn’t like killing, but will kill if necessary to carry out his ideals. The Sandrock has a fantastic super and excellent projectile based specials, but can not do many of his moves while air borne.

Chang is an angsty and misogynistic Gundam pilot hailing from the colonies. His colony was destroyed during the original Operation Meteor event, after which Wufei took the Shenlong Gundam to Earth to carry out the timed attacks on the Alliance. He develops a complex after being defeated in a duel by Treize Kushrenada. Every move of his can be done in the air, giving him a strong air game. He also calls his mech “Nataku”, the name of his dead wife, despite the mech’s actual name.

Zechs is a member of OZ and a close personal friend to its commander, Treize Kushrenada. However, Zechs eventually strays from OZ when his past begins to haunt him. Zechs is in fact Milliardo Peacecraft, the heir to the Sanc Kingdom, a peaceful kingdom of pacifists which was crushed by the Alliance. The Tallgeese is the highest jumper and has the longest lasting vernier, but is the biggest target.

Vayeate is piloted by Lady Une, a cold sadistic soldier and officer with a severe psychological disorder, who is also in love with Treize. She has very good projectile based attacks as well. In the anime Trowa Barton pilots this mech. Lady Une is generally not a pilot, but does step into the cockpit on rare occasions.

Mercurius is piloted by Lucrezia Noin, a piloting instructor whose trainees were killed by Chang Wufei. She is also secretly in love with Zechs. She also has a shield special that makes her invulnerable to every attack except throws. In the anime, Heero pilots this mech, and Lucrezia pilots two different mechs, neither of which are in this game.

Wing Gundam Zero is piloted by Heero Yuy, pilot of Gundam Wing. Zero is kind of the Ken to Wing’s Ryu, as they are similar, but not identical, in their movesets.

Gundam Epyon is the boss of the game and is piloted by Milliardo Peacecraft, the real name of Zechs Marquise. Epyon is playable in Vs. Mode or Trial Mode via a cheat and has, perhaps, the best super in the game, but lacks vulcans.

All in all, Shin Kidou Senki Gundam Wing: Endless Duel is one of the best fighting games for the Super Famicom. Definitely worth checking out for fighting game aficionados, even if you’re not into Gundam. 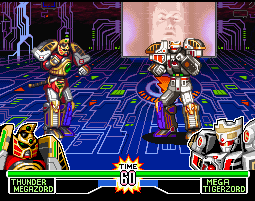 Roughly six months prior to releasing Endless Duel, Natsume had developed Mighty Morphin Power Rangers: The Fighting Edition for the SNES, exclusively for an American release. There are only eight mechs, the backgrounds are limited, and the screen size is cut due to an obnoxiously huge status bar. Even though it’s not a particularly deep game, but compared to a lot of other Street Fighter ripoffs at the time, it’s a remarkably well put together game. Endless Duel essentially uses a refined version of this same fighting engine, so Mighty Morphin Power Rangers: The Fighting Edition is more or less its predecessor. It’s worth seeking out if you like the gameplay from Endless Duel, because it feels pretty similar, and also has pretty rocking music.