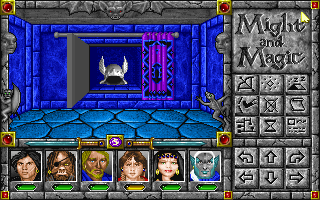 Darkside of Xeen plays very much like Clouds of Xeen. This is deliberate, as the games are meant to tie into each other. This not only allows players to import their party, but even gives the option to merge both games into the World of Xeen, which is further described below.

A coup has taken place on Xeen’s Darkside, much as on its upper levels. Lord Alamar has overthrown the Queen of the Darkside, and used powerful magic to take her castle out of sync with reality. The allies of the Dragon Pharoah, who could stand against Alamar, have instead either joined with the usurper or have been attacked themselves. The Dragon Pharoah himself, before he sealed his fortress, sent out an orb containing some of his power to some adventurers who might choose to stand against Alamar’s evil. Those adventurers are of course our heroes.

While the mechanics are virtually the same, perhaps the most obvious change from the last installment in the series is in the art style. Where Clouds was more in the vein of traditional fantasy art, in the style of Larry Elmore, Darksidemore resembles a Brom or Luis Royo – less in terms of pinup poster girls, and more in terms of the dark tone of the art. Where IV’s desert was sandy and covered in dunes, here it is barren and cracked. While Cloud’s skies were blue, on the Darkside they are always red, like a perpetual sunset. The world is also inhabited by lots of strange creatures you’d expect to meet at the Mos Eisley Cantina rather than a traditional fantasy world.

Once the player gets into the meat of the game, it becomes clear that while the mechanics are the same, there are some subtle differences in its composition. In particular, the game is much more puzzle-heavy and the story takes a place in the spotlight. Several dungeons require the player to solve puzzles to get through them, including a dungeon literally modeled after a crossword puzzle. Essentially, the game is designed for people who played Might and Magic IV, and are already accustomed to the mechanics of the game, so the designers can now play with the formula. An example of this is in the first major dungeon, where the player can potentially release an enemy known as “Barkman”, which is far more difficult than Xeen was in the previous game. To a starting player he would be an impossible threat. To someone importing normally-leveled characters from the former game he would still be very tough, and only to someone who power-leveled (or min-maxed) Clouds, he would be a more reasonable challenge. 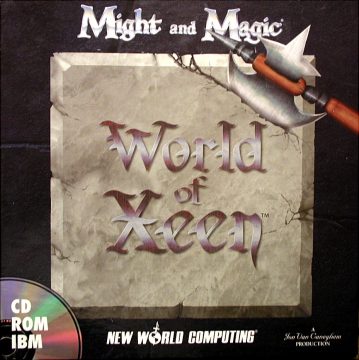 Clouds of Xeen and World of Xeen shared a very unique feature. The games could be installed on top of each other, intertwining their respective worlds, so players could transfer back and forth between the two storylines through certain portals. Once both quests are completed, the player can even embark on yet another journey, as an epilogue of the overarching storyline.

On their own, both games are very enjoyable games, even though Darkside of Xeen is rather difficult for starting players. Combined into World of Xeen however, they become the greatest part of the whole series. New World Computing and 3DO of course were aware of that, and later releases would bundle the games to begin with.

The first five Might and Magic games form one vaguely combined storyline, which is presented rather unevenly between the various games. In some games it is entirely possible for the player to miss massive swaths of the storyline due to skimming over text, or missing signage. With that in mind, this is a brief run-down of the storyline of these five games, referred to as the “Sheltem Arc”, due to their primary antagonist. The primary source on this, aside from the games, is the history at Angelfire.

At some point in the history of the universe, a race known as “The Ancients”, based on the planet Terra, seed the universe with flat “worlds” teeming with life. Eventually the “Ancients” fight a war with a “Demon” race known as the Kreegans. This leads to the Ancients being cut off from contact with their seed worlds.

Considering the ultra-science elements depicted in the series – artificial worlds called “Nacelles”, escape pods, security robots, and the fact that the Ancients are referred to as originating from Terra, it can be assumed that the Ancients are humanoid, and that the Nacelles are sleeper ships. Most, if not all, of the magic in the series can be described as being the result of Sufficiently Advanced Technology (see also: Clarke’s Law).

Anyway, each Nacelle had a Guardian – someone responsible for protecting each world and its population from attacks, and each was gifted with “magical” powers (which could be described as Administrator or Captain privileges) that are beyond human. Sheltem was the guardian of one of these worlds, but after he was suspected of having gone mad, the Ancients sent another of their servants, Corak, to investigate. Corak finds Sheltem and arrests him. On his return trip, their vessel encounters mechanical troubles and crashes.

After arriving on VARN (Vehicular Astropod Research Nacelle), Sheltem escapes and disguises himself as King Alamar, after killing the real king. When the player’s group of adventurers see through his ruse, Sheltem sends them to the dungeon and flees. When the heroes find the secret magic portal to another world, Sheltem secretly follows them, and enters the portal with them.

After arriving on CRON (Central Research Observational Nacelle), the players adventurers are psychically taunted by Sheltem. Sheltem’s goals, having shifted from world domination to destruction, lead him to steer CRON into a nearby star. The adventurers once again thwart this plan, but Sheltem flees again.

Sheltem has reached a cluster of worlds known as Terra (but not Earth). A group of adventurers join with Corak to hunt him down again. Once more Sheltem is forced to flee, this time in a spacecraft, with Corak and the adventurers in pursuit. Sheltem and Corak crash land on another world, while the original adventurers are thrown hopelessly off-course (and appear outside of this arc in Might and Magic VII).

Sheltem and Corak crash land on XEEN (Xylonite Experimental Environment Nacelle), a world split into two levels. Corak is trapped within his ship, while Sheltem is free to do as he chooses. Creating a lieutenant named XEEN he enslaves the upper level of the world, while he personally conquers the world’s darkside. A group of adventurers defeats his lieutenant (in Clouds) and, traveling to the Darkside, finds Sheltem and releases him. Corak devices a means for the adventurers to sneak him into Sheltem’s castle, as that’s the only way for Sheltem to be defeated once and for all – Corak will hide himself inside a “soul box”, and in the presence of Sheltem they should open it. After reaching Sheltem, Corak is released and the two do battle. As Sheltem appears to triumph, Corak activates his self destruct mechanism, destroying both of them forever. In the game’s epilogue, the adventurers re-unite the upper and lower worlds of XEEN into one using methods that aren’t explained clearly (SCIENCE!/Magic did it).